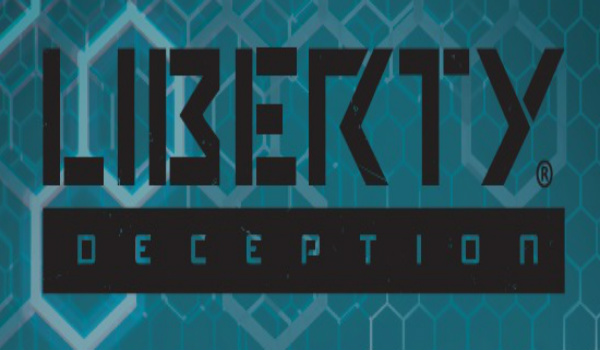 Hey gang, today we have yet another issue of Travis Vengroff‘s Liberty: Deception to sink our teeth into! If you haven’t had the chance to check out our review of Liberty: Deception #0 you may do so here (shameless self-plug). Before we begin let me remind our readers that Liberty: Deception contains all the hallmarks of a great independent, creator-owned comic such as violence, language, cannibalism, and violence (see what I did there?), which of course means that it is most certainly not for children. Now then, let’s get into Liberty: Deception, shall we? Warning: Spoilers below.

After a stellar prequel issue, Liberty: Deception #1 gives us our first look at the city of Atrius, which was only mentioned previously. Atrius stands as a triumph of democracy amidst the surrounding wasteland that the citizens of Atrius have lovingly nicknamed “The Fringe.” At least, that’s what the government of Atrius would have its citizens believe. The leader of Atrius is Archon Reeve, who I incorrectly described as male in my previous review (mistake count: 1), and the citizens of Atrius look to her in admiration. This sort of idolization can never be good, and only time will tell what Vengroff’s plans are for Reeve since as of this issue, we still don’t know much about her.

This issue deals with a character named Tertulius Justus, who has been viewed as a hero throughout the city of Atrius for some time. Justus is an investigator for the Atrius Bureau of Investigations, and his many deeds have been made public through the Broadcast Division of Atrius. Hm, sounds like propaganda, no? 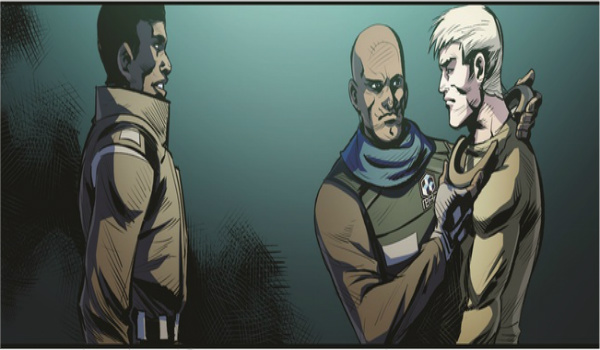 Vengroff wastes no time delving right into the action of this issue, in which he moves forward and backward at will, not unlike something out of Pulp Fiction. As stated in our review of Liberty: Deception #0 Vengroff shows great ability in the way he crafts his stories, and while this issue features more “sterile” speech from its characters, it fits in very well with the overall aesthetic and feel of the city of Atrius; it paints an excellent contrasting picture when compared to the grungy “Fringe”-heavy prequel issue.

Through flashbacks we learn that Justus isn’t the hero he is cracked up to be in all those heroic tales the Broadcast Division has been shoving down the willing throats of the Atrius public. No, in fact Justus is merely an actor. Yes, an actor. This is one of my absolute favorite parts of Liberty: Deception: the deception of the public by those with their greasy hands on the levers of power. Yes kids, the title says it all.

When Justus is fired for what can only be described as poor acting skills (or a conspiracy), he automatically becomes an enemy of Atrius’ political power complex and is scheduled to be executed; only, he has a plan. Justus fools his captors into thinking he is on a top-secret mission (note to self: remember this plan), and decides to take his chances in The Fringe. The only problem is he needs to escape Atrius first, and being numero uno on Archon Reeve’s “do not like” list won’t make that very easy. Justus will have to keep up his facade somehow, and survive long enough to make it outside into The Fringe.

Oh, the places this story can go. Will Justus eventually meet up with the Conways from the prequel issue? Can he avoid their insatiable appetite for human flesh (in the form of delicious jerky)? We’ll just have to wait to see, but I for one am hugely excited for this series; it shows tremendous promise. Let’s talk about why!

This issue features a different team than the prequel issue, with the exception of Vengroff and letterer Eduardo Camacho. While I greatly enjoyed the artwork in the prequel issue of Liberty: Deception, I must say that the new art team did an exceedingly fantastic job here. Raymund Bermudez handles the sketches and inks while Joana LaFuente brings the colors, and what a match this turned out to be! We must remember that in this issue we are visitors of the city of Atrius, which is basically your typical utopian society from the future, aesthetically speaking. Bermudez and LaFeunte do a fantastic job of bringing that out, and it works well in contrast to the prequel issue’s wastelands of The Fringe. 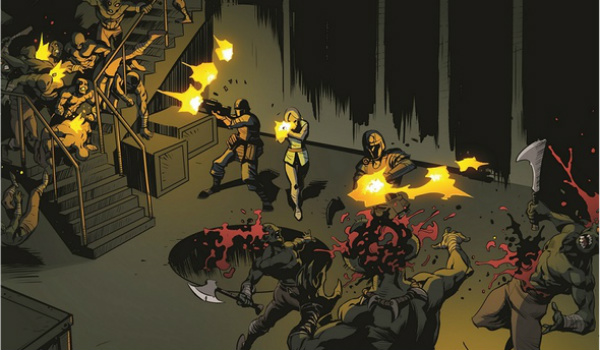 Like the prequel issue, Liberty Deception #1 tells its story through well written dialogue and fantastic looking locales, and focuses on building tension between the people of The Fringe and the government of the city of Atrius. That said, when there is the need for action, the creative team pull no punches. Nope, they just sock us right in the face with something you see right above this paragraph. God I love this book. I really do, please keep ’em coming guys.

Great story? Check. Eye-popping artwork? Check. Liberty: Deception has all the makings of an epic story that can only be told in glorious sequential art style. Who is Archon Reeve and what are her motivations? Are there conspiracy theorists among the citizens of Atrius who meet in speakeasys and discuss her nefarious plan to subdue the public through mass media smokescreen? Oh, and can we please get more of the Conways soon?

For more information about Liberty: Deception check out the official website here, where you can also pick up your very own copy of Liberty: Deception #0 and some other goodies; but wait, there’s more! Support the creative team on their Kickstarter and get your hands on all kinds of cool stuff like a chance to appear in an upcoming issue! C’mon you always wanted to be famous, didn’t you?

What do you think of Liberty: Deception? Don’t deceive us, let us know in the comments section and on our Twitter page!