Home » TRAILER: Teenage Mutant Ninja Turtles: Out of the Shadows #2 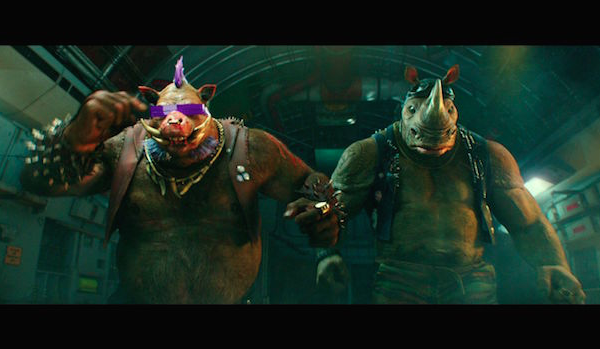 Here it is! Another brand-spanking-new trailer for our favorite heroes in a half-shell!

While I’m totally on-board for Teenage Mutant Ninja Turtles: Out of the Shadows, I can’t help but think they might be putting way too much into one film. In fact, I wouldn’t be surprised if this is the end of the franchise. Take a look at the most recent trailer and you’ll see what I mean.

So this looks a lot like the previous trailer, right? Not much else has been added besides a few more details about the plot. It seems like the movie is bringing back the concept of ooze, which we saw back in the 90s film series. This time, the ooze is not only responsible for mutating people and turning them into oversized animal-men (like what happens with the turtles and Beebop and Rocksteady), but it appears that the ooze can turn the turtles into human beings. As we can surmise from the trailer, the film’s subtitle, Out of the Shadows, reflects the turtles’ desire to leave the shadows and finally become part of society, which they’ll be able to do once they’re fully human.

I’m almost positive that Out of the Shadows is taking a completely different direction from its predecessor and going for the lighthearted, cartoony route. This movie just wants to have fun, which is what it should’ve been doing in the first place. Don’t get me wrong – I enjoyed the first film, but you have to remember that this is a movie about turtles fighting ninjas. You can’t expect this super deep, serious atmosphere out of it.

Like I said earlier, I think the studio is putting so much into this movie. In these last two trailers, we saw that the movie is including Casey Jones, Beebop and Rocksteady, Baxter Stockman, Shredder, and Krang. These are the most popular villains from the cartoon series and original 90s films. What’s going to be left for the sequel? Will they reuse some of these villains, or are they going to dig into more obscure enemies from the backend of TMNT lore?

Something that I have to point out about this trailer – I’m still not sold on Casey Jones. I love the original character so much, and I think he deserves a proper portrayal. The only time I thought they did him perfectly was in the cartoon series. In Out of the Shadows, it looks like they’re not doing the character justice. For one, he’s barely wearing his trademark hockey mask! We see him wearing it for like a second when he saves April from a gang of thugs. Then he has it off the rest of the time. What’s the point of even having it? Granted, that’s a major problem with any movie involving masks: they can’t have the actors or actresses’ faces obscured for too long. It’s one of my biggest pet peeves about the world of comic book adaptations. So far, the only movies I can think of where they didn’t have this problem are Dredd and The Dark Knight Rises. It appears that Out of the Shadows is going to be yet another casualty of the comic book movie mask issue.

Another aspect of the trailer I want to comment on, which might remedy my issue with Casey Jones and his mask, is the dimwitted duo Beebop and Rocksteady. I was pumped about these characters showing up in the sequel, and I was even happier when I finally saw how they looked in action. In this trailer, they get a little bit of dialogue post-transformation. It’s only two or three lines, but the banter between them is exactly what I expected. It’s this kind of stuff that leads me to believe that this movie could be as enjoyable and campy as the 80s cartoon. I’m hoping to have an enjoyable time with this film, and Beebop and Rocksteady could add the right dose of lighthearted fun.

Overall, I’m excited for the movie. I went into the first film with low expectations and I was pleasantly surprised. This time, I have pretty high expectations, and I hope I’m not disappointed.

Teenage Mutant Ninja Turtles: Out of the Shadows is going to hit the big screen on June 3rd, 2016.

Are you pumped for the next installment in the Teenage Mutant Ninja Turtles franchise? Tell us what you thought of the trailer in the comments or on Twitter.