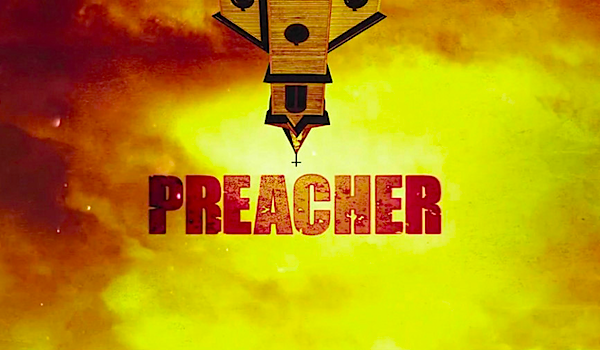 Seated in the first row of New York’s Kaufman Hall, I flipped through the free comic that was thrust into my hands upon entering the packed event being put on by 92Y. With an impressive cover that seemed to perfectly encapsulate the gritty series I would soon see play out on the big screen, Garth Ennis’ Preacher seemed like yet another comic-inspired show that would be enjoyed by new and old fans alike.

I should preface this review by confessing: I haven’t actually read Preacher.

That’s probably a blasphemous thing to say for comic purists who roll their eyes at avid television watchers who have no knowledge of the source material, but the fact of the matter is: Preacher isn’t a comic I even knew existed until I caught the promos for its television adaptation.

Having said that, thanks to a stellar Pilot episode, it’s a series that I’m quite looking forward to checking out, which, in my opinion, is indicative of the success of Preacher in the television medium.

(And FYI, you comic purists who hate page-to-screen adaptations, at the Q&A that followed the screening, Garth Ennis wholeheartedly approved of all changes made to make the story of Jesse Custer translate on television.)

Onto the good stuff!

I personally feel that a show’s Pilot episode tends to be the worst of the series, certainly not ever the best, due mostly to the fact that it has to establish the characters, plots, setting etc. in a manner that will immediately make viewers wish to see more. It’s a difficult task for sure but, while I never think a Pilot is the best episode, I do think that one can immediately get a feel for whether or not a series will be successful if those first 42 minutes do things right.

And man did Preacher do things right. 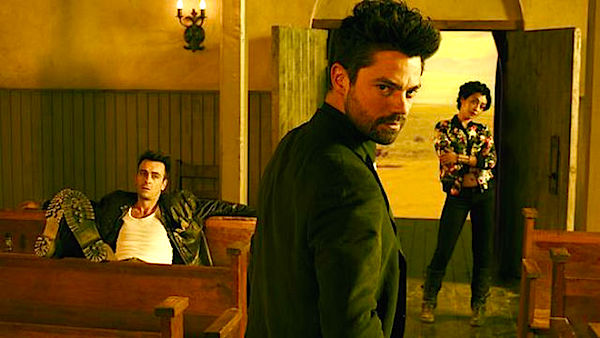 As mentioned previously, I had no real idea what I was getting myself into save for the smattering of promos and clips that have been released leading up to Preacher’s May 22nd premiere. As it turns out, what I got myself into was a series that seems to effortlessly fuse every genre into one packed hour of television. The show is rife with humor, violence, science fiction, more humor, and perhaps even a dash of romance.

Main character Jesse Custer, a preacher with a mysterious past, is stuck dragging himself out of bed each morning to serve God in what seems like a Godless town. Sure, the small population of Annville, Texas attends Sunday service, but the pews are filled with wife-beaters, murderers, sniveling complainers who take things very literally, and out-of-this world creatures that seem to find a home in Jesse himself.

Much of the Pilot episode follows this mysterious entity that crash-landed on Earth as it moves from religious host to religious host like Goldilocks, never quite managing to find one that fits just right. These poor souls meet rather unfortunate endings but, luckily, it seems that Jesse is exactly what this sentient thing has been looking for.

Dominic Cooper plays every facet of Jesse with an air of exhaustion that pretty solidly encapsulates a character that seems to struggle to get through each day in a town he doesn’t understand, full of people who don’t understand him. It’s clear fairly early on that Jesse’s presence in Annville has less to do with any real desire to return to his roots than it does to a promise he made to his father, the town’s former preacher, in his youth and a desire to escape from whatever life he was living before returning home. 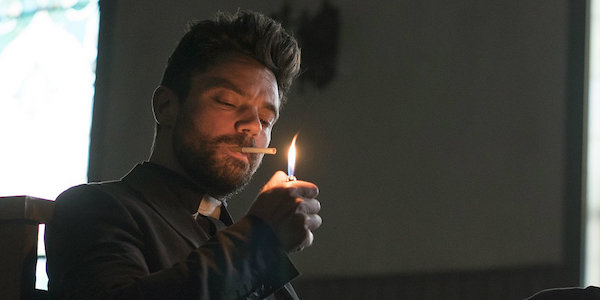 Unfortunately for Jesse, escaping things is far easier said than done, especially when his former love Tulip (played with a humorous viciousness by Ruth Negga) comes strolling into town behind him. Though strolling is not the correct word for it. Tulip crashes her way into town with a homemade bazooka, an extra left ear, and a smashed sports car that leaves a trail of dead bodies in its wake.

It becomes immediately clear that Tulip and Jesse have some unfinished business, particularly when Tulip gives a pair of young siblings some advice involving the tracking down of a significant other who broke your heart and eating them alive, and the relationship between the two will very likely be a large focus of the series moving forward. There was something that transpired between the two prior to the start of the series that sent Jesse back to Annville and (seemingly) pushed Tulip off the deep end. Whatever the duo got up to together prior to their return to Annville was most decidedly not good, in fact, it was something that Jesse thinks even God cannot forgive. 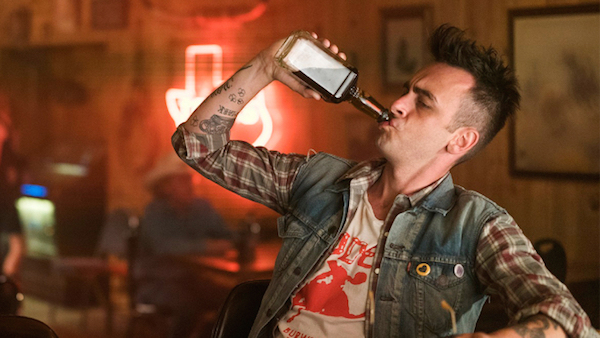 Preacher’s clear standout is Joseph Gilgun’s Cassidy, who will undoubtedly be the fan-favorite character as the series continues. He has the best one-liners and one of the most memorable fight scenes that I have ever seen in my life… and it takes place 30,000 feet in the air no less! Cassidy is a character who will no doubt serve as the outward comedic relief in a series that has both feet firmly placed in the, “dark humor,” section of television. The Irishman’s quick quips and physically jarring eating habits create a potent combination of perplexing charm and deep-seeded uncertainty that leaves the audience enjoying his presence while wholly uneasy about what said presence might mean.

Overall, Preacher is a series that I think will do well on a network that has given us shows like Breaking Bad and the comic-inspired juggernaut that is The Walking Dead. In fact, in some ways, Preacher seems like an odd tonal fusion of both shows. There is a grittiness to the series that is offset with what should be misplaced humor, but instead works perfectly in the overall structure of the show. It is this dark humor that I think Preacher is (as a comic) and will be (as a television show) known for. Because most of the laugh-out-loud moments occurred in moments that, should they ever transpire in real life, would have people gasping in horror and retching into the nearest waste bin.