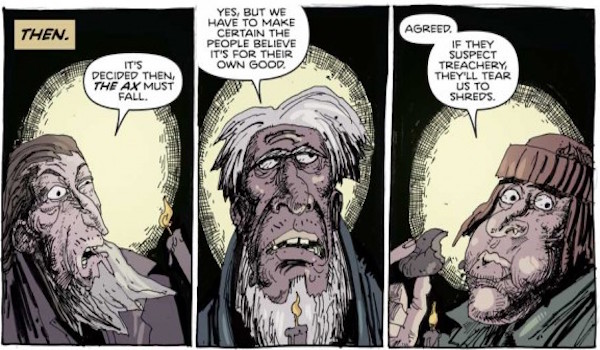 It’s been dubbed “Game of Thrones with cardboard homes” (by its publisher, Action Lab), which is an apt description of this original story by Adam Wollet and Rick Marshall. If that tagline alone isn’t enough to entice you, let me clarify what that entails: a fatherless boy in search of his true heritage, intricate political scheming, a disgruntled populace, and what epic saga would be complete without an axe-wielding tyrant chopping off thumbs. Oh, and did I mention this is all taking place in the homeless community? There is much to say about Kingdom Bum, but where this comic scores highest is originality.

First Coast City is a city much like any other, only this time we get to see things from a different perspective. That of the bums. Throughout the series we follow the city’s homeless community as it experiences some serious social and structural changes. First, the bums are ruled by the terrifying Philip the Ax, who chops off the thumbs of those who anger him. Then, after a somewhat treacherous uprising, the Ax is killed and a “democracy” is beginning to take shape under the unofficial leadership of the wise and benevolent Simon. While Simon holds the support of most of the community, there are those that lurk in the shadows (and sewers) who oppose him; an army of bums calling themselves the Thumbless, led by the power-hungry Edmond. Their aim is to overthrow Simon, and take over Kingdom Bum.

Apparently, Wollet got the idea for the story when reading an all-time classic, and afterwards eagerly suggested to his friend Marshall that they do “Lord of the Flies, but with bums” (http://superheroinchq.com/kingdom-bum/). And that they certainly have. As I see it, their concept is based on two main themes. First, as Wollet explains, it is about examining humanity, in the way that we are somehow pre-programmed into social creatures. And second, it is a, not so subtle, critique of society’s blindness towards the homeless and other outcasts.

Right from the start we are thrown into the midst of it all. Other than a short prologue, there is no real backstory, which at first struck me as somewhat confusing/overwhelming. That initial impression wasn’t helped by Jon Reed‘s artwork which I would describe as gritty and even messy at times. At first, these aspects of the comic put me off. But, about halfway through the second issue, things changed. I was hooked. Once you get into the story, you realise that the script and artwork work extremely well together. That said, I still had some trouble separating many of the characters. And even though the creators were helpful enough to add a page of character names and pictures, I still struggled with recognising anyone but the main three figures.

Therein also lies the problem with beginning a story mid-action; the characters just doesn’t become memorable enough. Especially if you introduce a bunch of them at once. In that sense the artwork could definitely have contributed to lessen my confusion by adding more distinct features to the characters. But maybe that would have defeated the purpose? I can’t help thinking that there is an underlying point to the artwork as well as the script. Maybe I am digging too deep here, but the difficulties I had in telling the characters apart might be purposefully mirroring the population’s inability of seeing a homeless person as an individual.

While Kingdom Bum could come across as quite dark (enhanced by the sober and, just right amount of, “dirty” colouring by Jen Hickman), it succeeds in combining its more serious elements with a sense of irony and humor. As inappropriate as it might be, some chuckles were definitely brought on by witnessing the thumbless struggle in this world made for thumbs. Also, keep an eye on what’s going on in the background; Reed has a talent for incorporating a surprising amount of activity in just one panel. What I find particularly intriguing about this comic is that, just as it’s trying to say, there is so much going on underneath the surface. I could draw possible metaphors all day. But don’t worry, I won’t. I’ll simply say, as I have before, that the originality of this is genius. A kingdom of bums! Why didn’t anyone think of that before?

What did you think of Kingdom Bum? Let us know in the comments below. If you haven’t read it yet, it’s available on Amazon, iTunes and Google Books among others. Happy reading!