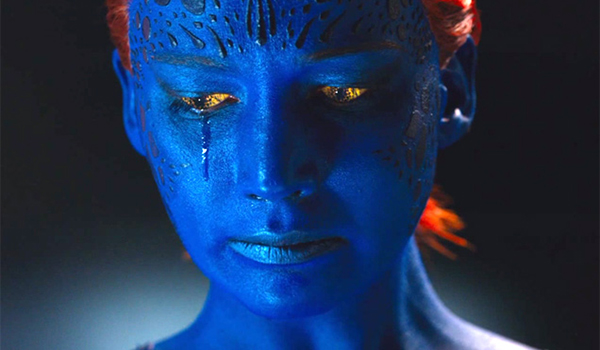 As one of the most intriguing characters in the X-Men universe, Mystique was for a shamefully long time stuck playing on the sidelines. The blue, shapeshifting beauty became known as not much more than Magneto’s, highly skilled, sidekick/assassin. After watching only the original X-Men trilogy you wouldn’t know much about this mysterious mutant. She was the one that stood out the most, which perhaps isn’t strange considering her blue skin and yellow eyes, but at the same time she remained under the radar – befitting of her alias, Mystique. Thankfully, X-Men: First Class brought Mystique into the limelight, and we began to get a sense of who she really is (the movie version, that is). It’s not easy to forget the scene where Charles Xavier first meets Mystique, or Raven as she then calls herself. In the shape of Charles’ mother, Raven is caught by Charles when searching for food in his family’s kitchen. Charles is clearly not fooled and persuades her to reveal her natural form. And there she is, this little, blue girl. Shocked that here is someone who doesn’t even flinch at her appearance.

Remembering Mystique’s vulnerability is key when looking at how her character has developed over the course of the X-Men films. With the events of X-Men: Apocalypse taking place after First Class and Days of Future Past, it means we can erase the image of the subdued and anonymous Mystique that we saw in the first three films. Due to the timeline fix in Days of Future Past, that actually hasn’t happened yet. And perhaps it never will? Instead, we are taken back to 1983, when things are looking quite different for Mystique. 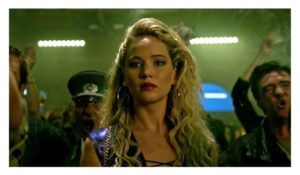 Raven’s insecurities, in particular relating to her appearance, is perhaps the cornerstone to why she acts the way she does. Her envy of less “visible” mutant abilities even led her to consider Hank’s transformation serum that would have allowed her to stay in the form of the lovely JLaw. However, a little attention from a handsome and older mutant was all that was needed for her to let go of that dream (and lucky she did, because the serum obviously didn’t work – Hello, Beast). And that’s the gist of it all. Having been told by most (including her adoptive sibling, Charles) to hide her natural form, it is no wonder she went into the arms of the one person that appeared to appreciate her for who she really is. Blue scales and all. Even though his interests weren’t perhaps as honourable as they first appeared. We all know that Magneto would ditch Mystique the second she lost her mutant abilities, lying naked and vulnerable on the floor of an armoured truck. I mean, if that moment was ever to come.

The ending of Days of Future Past clearly captures the conflicting sides of Mystique’s personality. At first fully intent on murdering Bolivar Trask, due to his experimentation with mutants, she ultimately spares him and on top of that saves President Nixon. Doing this, she altered not only the timeline of the X-Men universe, but also her own. Ironically, Mystique’s actions were supposed to prevent the apocalyptic future seen in DoFP from happening, yet here they encounter a threat of perhaps equal proportions – and even sooner.

In X-Men: Apocalypse, ten years have passed since Washington, D.C. when Mystique returns to Xavier’s School for Gifted Youngsters. She makes it clear that she doesn’t share Charles’ optimistic view on human and mutant coexistence; “Just because there isn’t a war, doesn’t mean there’s peace”. Since “outing” her mutation in the media, although unwillingly, Mystique has become a symbol and inspiration for mutants who have been in hiding. For someone who for a long time kept her appearance secret, this sudden fame is clearly causing conflicting feelings. Yet her notoriety makes it easier for young mutants to join up with the X-Men.

It is apparent she has become a stronger, more secure and independent individual, as she is now tasked with training and leading the X-Men against Apocalypse when Charles is captured. This will see her as a mentor, along with Beast (and Wolverine?), to young X-Men like Cyclops, Jean Grey and Nightcrawler. And with Magneto as one of Apocalypse’s horsemen, Mystique’s loyalties will no doubt be tested once again. It has been suggested that her and Magneto’s relationship will be explored to some extent even in Apocalypse, as will hers and Beast’s.

Another, less inspiring, rumour that has been circling Mystique is that this might be the last we see of her. Personally, I sincerely hope not. She is such a complex character, and it seems to me her journey is only just beginning. What makes Mystique even more alluring is that you never know what she will do next. And with the film deviating from the comics, there is no knowing where it will take her. Perhaps this will be the making of Mystique?

How do you feel about Mystique taking on a central role in X-Men: Apocalypse? And where do you think the story will take her? Sound off in the comments or send us your thoughts on Twitter!