Home » REVIEW: The Face and the Hand 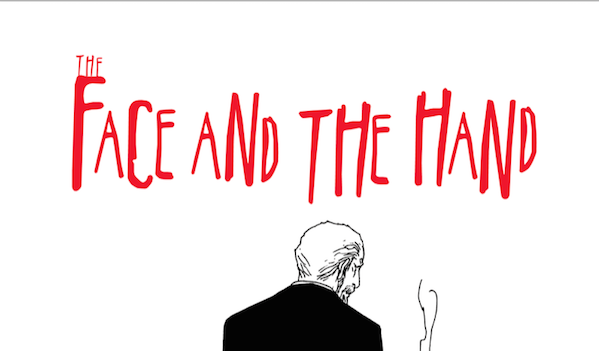 In a world saturated by superhero/supervillain comics, movies, and television, you may think it’s hard for another vigilante story to separate itself from the pack. I mean, how else can you rewrite the same concept and still keep it fresh? Well, you might be in for a pleasant surprise once you lay your hands on this latest indie comic, The Face and the Hand, a story that has the potential to stand out from the vigilante genre as we know it.

Written and published by Philadelphia-based comic creator Daniel Eastman,  The Face and the Hand is more of a story about self-reflection and combatting negativity rather than just a tale of a guy running around and kicking the crap out of criminals. In this series of short stories, we follow two men, both attempting to make the world a better place, albeit in slightly different manners.

The comic opens up with a mysterious masked vigilante named “The Face” as he beats the hell out of a guy who just assaulted his girlfriend. Just a forewarning: this comic is not for young readers. Not only is there enough rough language to make a sailor blush, but almost every chapter features some heavy, mature themes and concepts. And you know what? I’m all for it. 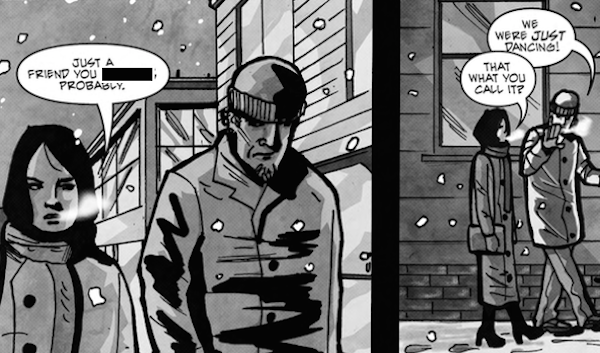 It’s about damn time we have another comic with some guts. I’m tired of comics playing it safe and toning down on harsh realism in an attempt to pander to wider audiences. The world isn’t all sunshine and rainbows. It’s a crappy place, and comics should reflect that notion. Unfortunately, it looks like you’ll have to dig deep into the indie scene if you want to find such stories that aren’t afraid to go beyond these boundaries. Kudos to Eastman for not giving a damn and going all out.

As the story unfolds, we learn more about the Face and his mission. We discover that his real name is Brian Ames, and that he’s a recovering addict attempting to right the wrongs in his life. His sole companion is the ghost of his deceased girlfriend, Eliza, who provides moral support throughout his adventure (it’s also shown that Brian’s addiction caused an accident that led to Eliza’s death, which is further motivation for him to handle the scum of the city).

Throughout the comic, Brian attempts to kill himself, but for some reason, he just can’t do it. Something always prevents him from checking out too early. It’s like he’s not allowed to die until his mission is over, and he has no choice but to keep going. In a way, the Face is like a combination of Casey Jones and the Crow, with a touch of Rorschach thrown in there. He’s not this upbeat boy scout trying to uphold justice because it’s the American way. He’s simply speeding up his journey to Hell while trying to boost his karma along the way. Like I said, it’s about time we get some brutal realism thrown into our comics, and Brian/The Face satisfies that request.

On the other side of the pages, we follow another character: the enigmatic Dr. Hand, blessed with the power to bring people back to life (usually after he kills them). Whenever he resurrects a victim, he makes them feel the same pain that they’ve inflicted on others. Imagine if Jigsaw had the same powers as the Crow, and you’ve got Dr. Hand. It’s pretty awesome to watch this character use his abilities on his victims, but at the same time, it’s incredibly disturbing. He has the potential to be such an awesome villain if he’s put into the right situation, and we actually get a glimpse of such a scenario towards the end of the first issue when he encounters Brian. It’s also worth noting that Dr. Hand’s supernatural abilities don’t take away from the overall realism of the story. It continues to flow smoothly page after page without pulling you out of the experience.

I’m a huge fan of the artwork. Pretty much any comic earns my praise if the images are decent, and this story is no exception. A variety of different artists/letterers lend their talents to The Face and the Hand, such as Mac Radwanski, Erech Overaker, Rob Jones, Armin Ozdic, Samir Simao, Jhomar Soriano, and Anna Weiszczyk. There’s a sort-of noir/pulp aspect to the artwork that almost feel like this dark mystery story is unraveling in front of your eyes. It was a good idea on the artists’ part to go black and white since I feel like splashes of color would take away from the gritty darkness that makes The Face and the Hand so enticing. 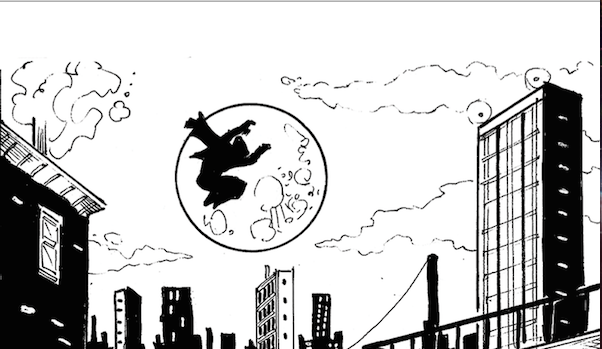 Now, as much as I enjoyed this comic, I have my fair share of criticism. I noticed some minor typos here and there, and the sentence structure is a bit difficult to read in rare instances. I found myself having to re-read a passage or two to make sure I had digested it correctly. Like I said, these are very minor occurrences, so it wasn’t enough to detract from my overall experience.

I want to offer my final praises to the overall setting of the comic. The Face and the Hand takes place right here in my native Philadelphia. The comics we usually read take place in either a fictional town such as Metropolis, or in the default New York City. For once, it was great to see my hometown represented on the pages. While I was reading, I kept going, “Hey, I get that reference! I think I know where that place is!” It’s pretty cool being able to relate to a location so well. Maybe we’ll see other comic creators take note and start using Philly as their stories’ settings?

The Face and the Hand is a great read for anybody who wants something different to add to their shelves. As I stated in the beginning of this review, it’s not another comic about superheroes beating each other up. It’s a tale of reflection, recovery, and forgiveness, with a little action thrown in to spice up the pot. I for one am looking forward to Eastman’s next installment, and hopefully after checking out this first issue, you’ll feel the same way.

The Face and the Hand will be released on July 13th, 2016. Make sure you follow the Facebook page to stay up-to-date on current happenings with the comic!

Does The Face and the Hand pique your interest? Are you going to grab a copy when it’s released? (Hint: you should!) Share your thoughts in the comments or on Twitter!