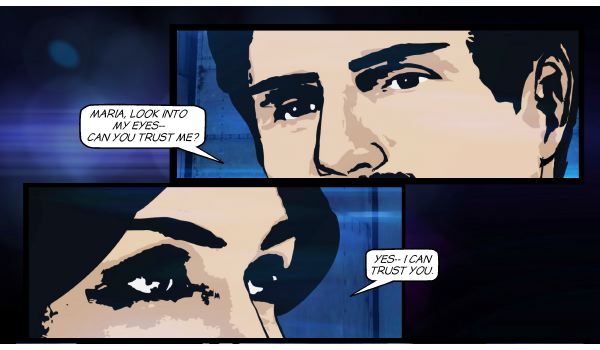 Upon first seeing its cover, I thought I was looking at a movie poster. And as it turns out, I wasn’t that far off. Ruthven: Citizen Investigator takes a rather different approach style wise, and the result is more reminiscent of a video game or film than of a comic book. In this first issue of four, Ruthven: Citizen Investigator follows a kidnapped waitress called Maria, as she is trained into some kind of super warrior by a shady group of people. Hopefully without spoiling too much, I can reveal that she is then rescued by the main guy – James Ruthven – an investigator operating in a futuristic society called City-State, where apparently everyone from the medical professionals to the police are corrupt. The story then centres on Ruthven and Maria as they try to expose this gang and prevent them from executing their plan of overthrowing the City-State government.

The comic’s creators, C & Q Bowman, have said that they wanted to get away from the “hopelessness and horrible, unrelenting despair in pukey green or blue colours” (http://ruthvencitizeninvestigator.weebly.com/about.html), which they perecive to be the norm in comic books. And that they certainly have. Instead, Ruthven is a dark series throughout, with regular laser-like flashes of colour acting as the only source of light. While I do not claim to be an expert in the matter, the whole concept just felt a little off in my opinion. 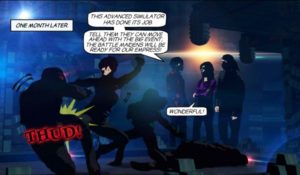 The artwork, especially the backdrop, is stunning, and its dark theme certainly fits the story. That said, the video game-like feel, although visually pleasing at first, does get rather monotone after a while. This also makes it difficult to make out what is happening, as there are the occassional panels with nothing but “crash!” and “smash!” as the only information to go by. On that note, I felt the speech bubbles with “sob!” and “gasp!” dragged down the dialogue, which otherwise was fast-paced and served well in telling an interesting story. However, putting emotions down in writing was perhaps necessary, as the characters appeared incapable of producing any type of facial expressions.

On the whole, I can say that Ruthven: Citizen Investigator succeeds in doing what every indie comic should in my book – be original. Personally, I have not read or seen anything similar before, and for that I applaud its creators. I expect it will appeal to those who appreciate a more modern, movie-like, take on the comic book concept. For me, however, it did not really work. It could perhaps benefit from slowing things down a little, carefully building up suspense and character development. Because it has the potential of being a thrilling story. This being just the first issue, a heck of a lot happened – which to some extent deserves some praise, many comics are just too slow – but here it comes across like they were trying too much, too fast.

What did you think of Ruthven: Citizen Investigator? Sound off in the comments or send us your thoughts on Twitter! If you haven’t read it yet, all four issues are available for download at drivethrucomics.com.