Home » Why You Should Be Reading The Kill Screen 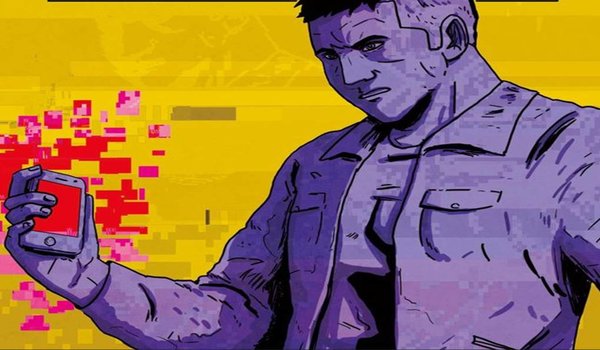 How are you, readers? All your base are belong to us. You are on the path to destruction. Resistance is futile and all that technobabble. One of the benefits of writing for A Place To Hang Your Cape is getting to read and review indie comics, original works outside the juggernauts that are Marvel and DC Comics. Amongst my favourites, and in fact one of the first comics I read after joining this website, was the absolutely amazing The Kill Screen, created by Mike Garley, with illustrations and lettering by Josh Sherwell and Mike Stock.

This four-issue comic which I’ve reviewed during my time here, is a creatively brilliant comic about a post-apocalyptic world where an incident called the Kill Screen has destroyed humanity. Computer errors, viruses, glitches, and video game/internet-related features have materialised in the real world, infecting humanity, and turning any tech into deadly weapons. Over the comics, we follow a growing group of survivors as they try to fight for their lives against the hordes led by an enigmatic badguy based on the villain from the video game Zero Wing.

I had the pleasure of meeting the writing crew at 2015’s London Film and Comic Con, and have recently learnt that Garley has started making plans for a sequel on Patreon. So, to commemorate this occasion, here are some reasons why you should be reading The Kill Screen.

The thing that instantly hooked me onto The Kill Screen aside from the eye-boggling art style was the fascinating premise. The titular Kill Screen’s origins or cause remain a mystery during the story, and the flashbacks to the past showing it occurring, the world glitching out, and people being consumed by once harmless trends and personified internet phrases are very haunting yet perplexing. Turning internet/video game phrases and iconography into deadly viruses and monsters is a great idea. Amongst the featured mythos include explosive phone bombs, projectile blue shells (a nod to Mario), deranged psychopaths cast in “red” and “blue” teams akin to a FPS, and an army of religious fanatics called Followers whose heads are encased in green armour resembling the icon of The Sims. And that’s just the start of the pixelated creativity.

Thankfully there is more to this comic than cool artwork and nods to internet memes. The writing is continuously good, with very witty dialogue, and more creative use and references to internet and gaming slang. It also allows the characters to be fleshed out a bit more and not just stand around looking bored and sporting looks of dull surprise. There are discussions about how the world will go on, how the humans will survive, and would it be better to just join the Followers or fight to survive.

I would say that the most outstanding element of The Kill Screen has to be its art style. Since the first page, the unique use of pixel art, 8-bit styled visuals, and clever use of computer errors and infoboxes really make these comics worth a read. It allows the creators to avoid having to use graphic gore and go for a more imaginative style for showing violence and tragedy. I am still baffled by just how this artwork is created, and the repeated use of pixels and glitchy computer graphics are great. I would especially say that the amazing explosions in the comic pages are weird, bizarre, and colourful. Just how do they do it? It is definitely a new brand of science fiction. Like a mixture of The Matrix and Pixels from an alternate reality where it had been a good movie.

I highly recommend The Kill Screen to anyone and everyone. As a person who grew up with the evolution of the internet, this had me instantly impressed and I highly look forward to where Mike Garley and co. will take this story.

Have you read The Kill Screen and what were your thoughts on it? Leave a comment below or on our Twitter feed. And please support the Patreon for this comic series.