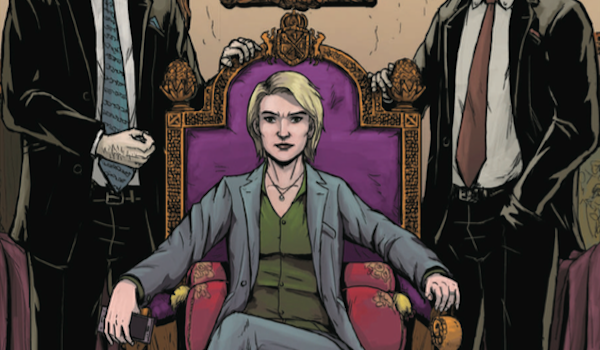 With all of the recent political hullabaloo, it seems incredibly fitting that the first question Queen asks of its readers is, “Do you trust your government?”

My mind immediately responded with a scoff and a resounding and emphatic, “No,” which, in my opinion, was the first indicator that Jamie Me‘s graphic novel would be a significant one. And if I didn’t believe that after Question #1, Question #2 solidified it for me: 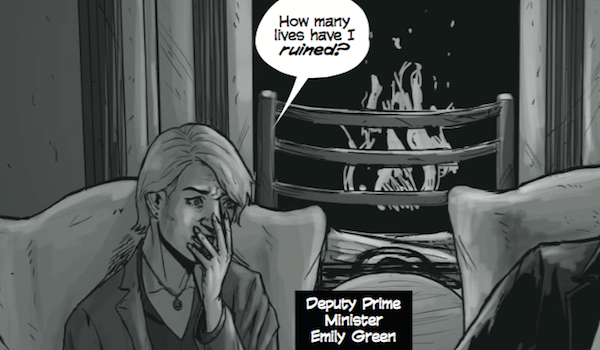 The timing of this novel is perfect considering the real-world chaos that has hit British and American politics as of late, and makes the read that much more impactful. Though fictional, the essence of Queen is that of the corruption that seems to have plagued politics since day one. It takes the classic, “The end justifies the means,” mindset to an entirely new level and provides an interesting look at how far certain people are willing to go for power. As we have come to realize, people are willing to go very far for a nice title and potential pay-raise, which is something that Queen emphasizes with marginally heightened dramatics and a protagonist whose morals will seemingly become increasingly grey over the course of the series.

The mysterious Nidus, an organization looking to overthrow much of the British government (specifically accused liars within Britain’s Conservative Party), sets their sights on protagonist Emily Green. The focus of this introductory issue is on setting up Emily as the individual chosen by this Big-Brother-esque organization to rise to power as the next Prime Minister. The information that the individual on the other side of the burner phone slipped into Emily’s mail is enough to make her seriously question herself, as well as the how’s and why’s of this potential political coup.

The comic focuses heavily on its visuals, with many of the panels not relying on text at all. This would be a fairly substantial risk were it not for the fact that the combined skillsets of artist Bernardinus Gita and colorist Sean Callahan makes for a visually compelling story. The images do a solid job at enhancing rather than detracting from the overarching plot of the issue and manage to elevate the story as a whole. There is a synergy between text and image that makes Queen a novel that is both interesting to read and to look at.

Queen has a premise that, while not necessarily the first-of-its-kind, seems to strike an even larger chord in today’s political and social spectrum. The corruption of politics is something that seems to be a constant, which makes the behind-the-scenes look at this potentially (who even knows these days) heightened version of said dishonesty and misconduct is something that I think the every-woman and every-man can appreciate and be impacted by today. I’m excited to see where this series goes, as a teasing peek at the future makes it clear that this is much more than just a political thriller.

Check out some previews of Queen #1 and be sure to follow Creator Jamie Me on Twitter for any updates!