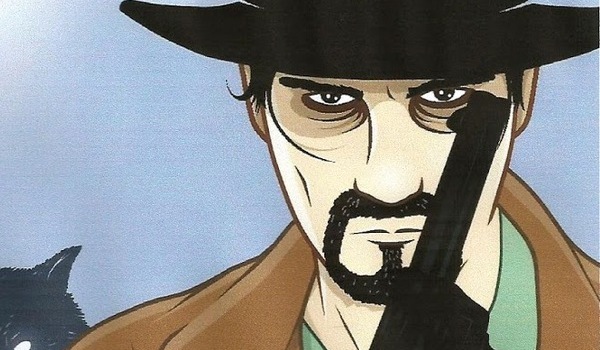 From Planet Jimbot comes a comic seeing mythology’s two greatest rivals duking it out on the Old West frontier. A Place to Hang Your Cape recently caught up with Wolf Country writer and creator Jim Alexander to discuss its conception, inspirations and what the future holds for this busy comic creator.

AP2HYC: What drew you to blending the classic werewolves versus vampires’ war with the Western genre?

Jim Alexander: It came about in a mishmash sort of way; ideas and inspiration coming from all directions and it all sticking together. I’ve always been a fan of the Western. To me, it’s the closest thing time-wise to proper mythology. It’s all heroes in cowboy hats and tales of the legend of the Wild West, men with black hearts, and communities struggling against both the elements and each other. I’ve always liked the New World frontier aspects of the Western. You can’t go wrong with a Man with No Name.

I’ve used the title Wolf Country for a Raven Chronicles comic I stripped for Caliber a few years back, and I’d always liked the title and thought it strong enough to support a book. It’s always been in the locker. I wanted to do something with the idea of a settlement surrounded by a hostile population which doesn’t want them there. And then there was the idea of having vampires and werewolves as indigenous, recognizable, fledgling societies trying to find their way in the world.

AP2HYC: Was there any comics/films/plastic-bags-drifting-thru-the-wind that have inspired you as a comic writer? What about Wolf Country?

Alexander: I try to be open to as many influences as possible. I’m not sure how that part of the brain works, but I store away all the things I’ve seen and read that have had a profound effect on me; that have really moved me; probably in the hope that at some time in the future I can make a cack-handed attempt at replicating them. You know, that’s a good question, perhaps too good, because I’m struggling to give you anything in the way of specifics. How about, if I was to compare anyone to a plastic bag then it would have to be Alan Moore.

As for Wolf Country, the main character Halfpenny is named after a Welsh Rugby Union player. The High Executor has the voice of Morgan Freeman. The idea of the giant heart occupying the middle of the vampire city was in part inspired by a conflation of two Kate Bush songs: ‘Top of the City’ and ‘Constellations of the Heart.’

AP2HYC: What challenged have you faced while creating Wolf Country?

Alexander: The main challenge is scheduling. Wolf Country is self-published and unfortunately that means we can only devote so much time. We roughly put out two-three issues a year. The type of story Wolf Country is – the scope and ambition of it – it could only benefit from coming out on a more regular basis. We also don’t have a distribution or marketing budget. It’s a challenge certainly, but it’s not one I can get too frustrated about, because if you sign up to self-publishing, it’s just something you have to accept. But we’re working on it. Getting the word out; reviews and interviews like this really help. There’s been interest from TV companies and I’m talking right now to a US-based publisher. I know it’s a hoary cliche to say ‘watch this space,’ bit I think Wolf Country might be a space worth watching.

AP2HYC: Religion is a heavy feature in the comic. Was it always important for you to explore the vampires’ religion, or did it crop up while creating the comic?

Alexander: I had a fixed view that the vampire society is an embryonic one; still very much in its infancy. Religion is something that gels peoples together. I’ve always been fascinated by the Judeo-Christian streak that runs through human development. I’ve always been captivated with the subject of religion. Strictly speaking, I think I’m agnostic, but I think you can have Christian values without necessarily believing Christ is the son of God. I did say it was a mishmash, but anyway, that was my thinking as regards to that part of the story.

Alexander: I think it was for practical reasons. The vampire society has more in common with how we as readers view society, so it wouldn’t, I think, pose too great a leap from one to the other. I like the idea of the readers feeling cozy and familiar and then wham bam sticking it to them; reminding them these are blood-sucking, bogey-man vampires we’re dealing with here. I like to introduce a jolt now and then to proceedings. The next volume will focus a lot more on werewolf society, which is far more feral and anarchic, building things up only in the fullness of time (and of the moon) to tear it back down again. In fact this is more evidence in Wolf Country #5, which follows on directly from the TPB.

AP2HYC: What can we expect next from you and from Wolf Country?

Alexander: I’m currently working on a novel called GoodCopBadCop (a modern crime-take on Jekyll and Hyde where the ‘good cop’ and the ‘bad cop’ are the same person). I’m putting the finishing touches to this and I’m hopeful it’ll be finished before my birthday in August. From a publishing point of view, Savant (drawn also by Will Pickering) will be appearing in issues 32-37 of Dark Horse Presents; Amongst the Stars (with art by Mike Perkins) is due to be released by Caliber; and a strip I wrote for Judge Dredd: The Megazine back in the day (Calhab Justice) is due out soon, reprinting by Hachette Partworks.

Thank you to Jim Alexander! To keep up with Jim’s latest comic feats, follow Planet Jimbot on Twitter!

Excited for more Jim Alexander projects on their way? Sound off in the comments or send us your thoughts on Twitter!