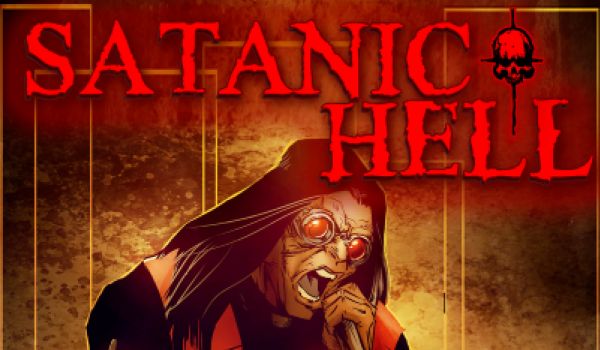 Hello again, everyone! And welcome to another AP2HYC review. Today I will be going through Satanic Hell by Grigoris Douros and Kevin Enhart from Alterna Comics.

They say you should never judge a book (or graphic novel, even) by its cover and I have to confess, going strictly by the title I was a bit unsure about Satanic Hell. I’ve always been slow to warm to stories involving angels and demons and the like. Don’t ask why, all I know is that it took me six months to watch the Constantine movie. Yeah, the one with Keanu Reeves. Anyways, this is not that. Or anything remotely like that, although there is some talk of demons.

The three main characters; Death Priest, Exodus and Dante, make up a death metal group named Satanic Hell who venture to far right-wing Texas to play their next gig. And when I say far right-wing I mean so far right it makes anything you’ve witnessed in this realm seem like a joke. In this story, the state of Texas is completely governed by the Christian “Church”. Schools, local government, emergency services, the whole lot. They basically own everything. So you take that on one hand, and on the other you take a trio of metal-heads who drive a hearse to get around; put them together and you get an unholy shit-storm of religious propaganda, a bubbling rebellion and more religious propaganda. And it is bloody awesome. 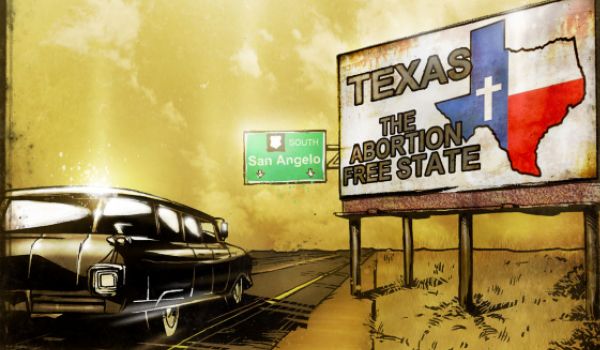 The story itself is fantastic. Grigoris does a brilliant job of keeping you engrossed in the action. You literally have no idea what’s going to happen next because the entire premise of the story is so out there, meaning there are endless possibilities of what could happen. And just when you think the plot is going one way, you’re immediately thrown a curveball and proven wrong. It’s very exciting to read and you’ll find that the combined 200+ pages of all seven volumes just flies by. But, interestingly, there’s more to the story than the story itself. There is extra appendix-like content that bridges the volumes and makes them feel more of a whole piece rather than separate works (a great idea by the way). There’s lots of additional content to go through, like album art and discographies, interviews, and newspaper entries. It was a great way to deepen involvement in the story and gain a better understanding of the setting and characters.

Speaking of the devils, each of the characters have their own unique quirk (which I won’t ruin for you, it was fun trying to figure out) and together you can see why they work so well as a band. That being said, the group dynamic is rocky to say the least… no pun intended. They’re quick to jump at each other’s throats upon a disagreement but just as quick to de-escalate the argument when it matters (or sometimes when it’s too late). It makes for some very interesting dialogue, and certainly a few laughs along the way. 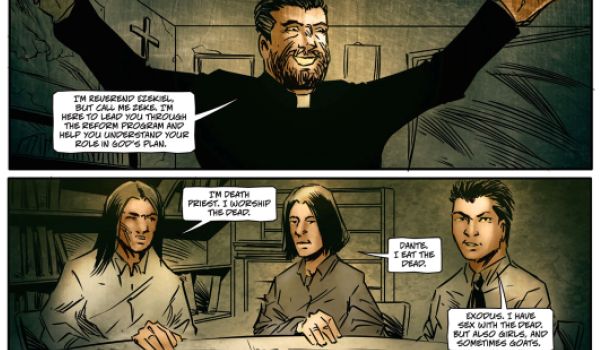 Moving onto the artwork now, and Kevin Enhart (along with Newel Anderson and Jimmy Kerast) really sets the tone of the novel with their work. The palette is washed out, which serves to emphasize the blacks and reds and gives the novel a somewhat archaic feel. The backgrounds are blotchy like old paper or parchment, which contrasts with the bold ink lines and splashes of blood. It made me feel as if I wasn’t really reading a comic, but an ancient book or tome… the kind that you shouldn’t be reading unless you want a curse on you and your descendants. I imagine the paper version to feel slightly worn and rough to the touch as opposed to the glossy smooth pages we’re so used to. I’m not sure whether that was intentional or not, but either way, it works incredibly well and is extremely satisfying to look at.

Satanic Hell is a fantastic piece of work and my only issue with it is that there isn’t more! I haven’t quite found the words to express how much I enjoyed reading it, and I think you’ll feel the same way. You don’t even have to be into metal, you just have to be prepared for one (literal) hell of a ride. So c’mon, take a leap of faith and dive into the controversial world of Satanic Hell, which you can buy on comiXology or as a PDF. You won’t regret it. 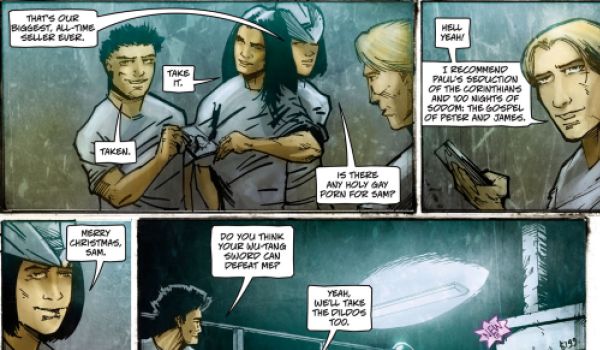 If you’ve followed my sage advice and grabbed yourself a copy, or even if you’ve read it already, give us a shout in the comments or on Twitter! You know where to find us. 😉