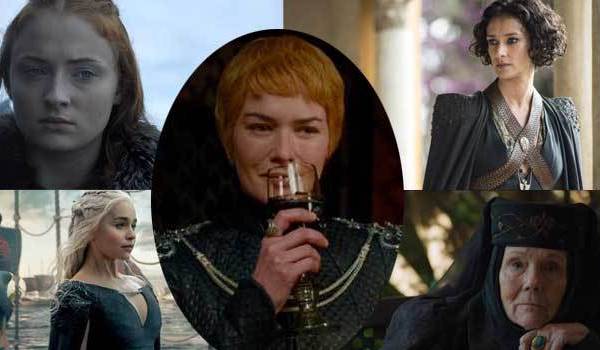 Not everyone can emerge naked from fires that roast enemies alive or serve up justice through baked goods. Sometimes the quieter victories, like making Dorne interesting, should be celebrated. The first five seasons of the HBO juggernaut Game of Thrones flew by for me, mostly because I watched it within a two month period. It’s emotionally exhausting, to be a Game of Thrones fan. It’s an even more turbulent feeling to be a female fan. The show’s female characters have long been scoped through a male perspective. They’ve been generally sidelined in main story arcs, used as motivations for male characters’ actions. If women did have their own story, it came with a price, usually expressed with gratuitous nudity only serving to ‘spice up’ a scene or monologue, rape, physical violence and more nudity.

Now that the dust has settled over season six, women can stop clinging to Brienne of Tarth for dear life. Winter has come to Westeros in a strange way, swinging more of the Game of Thrones narrative towards its female characters. They’re tightening their corsets and thriving in the game of thrones, becoming fully formed and dynamic characters. Overall, the women of Game of Thrones have claimed victory over season six. Raise the vagina banners at your leisure.

The show loves to remind viewers, “all men must die.” Well, one stark factor to women gaining political power during season six is there’s considerably less competition for the iron throne. Many a man have badly lost the game of thrones. The War of the Five Kings is over: stabbed-stabbed, poisoned, beheaded, and thrown off a bridge. The once mighty House Baratheon is gone, save for a bastard perpetually rowing to God knows where. Most of the surviving men aren’t interested in claiming the iron throne for themselves. The solid two that are, Littlefinger and Euron Greyjoy, aren’t immediate threats. Baelish is surely going to spend the better half of season seven stirring up some bullshit in the North, while Euron, who hasn’t been seen since episode five “The Door,” will most likely complete his boat building just in time for three dragons to burn them down.

The current occupant of the iron throne, Cersei Lannister, is the epitome of ‘fake it ’til you make it.’ From seasons one through four, it ‘s clear Cersei has a certain level of influence. She can manipulate the small council and conspire to get the King plastered above the legal boar-hunting limit. What’s also clear is Cersei’s inability to wield that control over anyone in her family she hasn’t already slept with. Her womanly wiles can only go so far.

However, things shift for Cersei in season five when she becomes the perspective character for King’s Landing. Once Tyrion crossbows Tywin and flees via shipping crate, Cersei’s arc is front and center. As a result, she transforms into one of Game of Thrones’s most complex characters. All of Cersei’s season five drama, from unintentionally creating another monster in the form of an annoying cult leader instead of a toe-headed bastard with a punchable face, to the walk of atonement in “Mother’s Mercy” is her internal fire throughout season six. In “The Red Woman”, she’s at her lowest, further beaten down by Myrcella’s death.

It’s Cersei who has the last sip of wine, destroying all her enemies in one, fiery swoop in “The Winds of Winter.” She may lose her last child in the process, but killing everyone certainly has its perks. She has no opposition in King’s Landing. Most importantly, she doesn’t have to rule through a king. She’s no longer someone’s wife or mother. She is now truly queen.

Of course, Cersei remains blissfully ignorant of the fact she may just be keeping the seat warm for a woman of many names. Since season one, Daenerys Targaryen has been aching to hightail back to Westeros and reclaim the crown for the Targaryen dynasty. Yet that dream is put on the back-burner in season four when she decides to practice being a queen in Meereen. And it goes terribly, literally for everyone involved, even the viewer at home forced to watch Daenerys’ story line stalled for almost two seasons. The instability of Meereen, coupled with her helplessness in protecting her people lands her back in the clutches of the Dothraki at the start of season six. It’s very reminiscent of early season one Daenerys, who had nothing but a creepy older brother and a powerful last name.

What season six proves is Daenerys doesn’t need her army, her advisers or even her dragons to conquer and win respect. Like in season one, she’s gain confidence in herself as a ruler, enough to smirk in the face of gang-rape threats. Her burning the Khals and emerging from the fire unscathed catapults her plot forward, her ambitions for the iron throne reignited. When she flies back to Meereen, she does not negotiate with the Slavers. She came, she saw, she burned them alive. It makes getting kidnapped by the Dothraki a blessing in disguise. Cersei Lannister is far from the only woman to clean up in “The Winds of Winter.” Daenerys finally sets sails with her army, allies and dragons to Westeros, to fulfill the destiny promised to viewers since season one.

It seems the mark of a victorious woman in season six  is a smirk, and no one deserves to curl their lip slightly upward like Sansa Stark. A once self-described “stupid little girl,” she’s spent most of her time on the show as a prisoner of war. It wasn’t until season four it’s revealed she’s been paying attention to the scheming and manipulating in King’s Landing, and puts it to good use. She bests master manipulator Littlefinger, and refuses to be a victim any longer. And then she’s raped. Sansa’s rape in season five’s “Unbowed, Unbent, Unbroken” completely undercuts her belated character development. It’s also not even about her; it’s about Theon, and how Ramsay has completely broken him. The camera is glued to Theon, or Reek in his prime, wincing but immobilized, while Sansa whimpers off screen.

Season six gives Sansa the chance to rectify her victim status. She’s hell-bent on taking back her home, with or without Jon Snow’s help. In “The Door,” she hands Littlefinger a verbal smack down for dropping her off with the Boltons. She proves she has a knack for war strategy, and predicts exactly what Ramsay does on the battlefield. Of course, her advice is promptly ignored by Jon and his makeshift war council, causing her to swallow her pride and accept Littlefinger’s aid. She’s the real hero of “Battle of the Bastards,” and garners none of the credit. She takes a page out of Cersei’s and Daenerys’ playbook and rips her enemy apart. No one ever claimed Sansa to be a trendsetter. Sansa may be home, but with Littlefinger lurking in the corners of Winterfell, she has yet to face her greatest foe.

Cersei, Daenerys and Sansa may have taken the forefront in season six, but Game of Thrones spotlights other female characters’ political aspirations. Ellaria and her Sand Snakes make an appearance in three scenes, but in their limited screen time, they get a great deal done. They lead a successful coup in Dorne and convince mourning Olenna Tyrell to forge a power-alliance with Daenerys. Yara secures her alliance with the Mother of Dragons with casual flirting; it’s no big deal for all parties involved. Meanwhile, one of the Stark’s biggest supporters is the sassiest little girl in all of the seven kingdoms. Ten year old Lyanna Mormont is the first to proclaim Jon Snow king of the north, in a room filled with grown men. She has no time for frivolities; she has an island to run.

Politics aside, many female characters not directly on the battlegrounds have had quiet, personally growing victories. Brienne of Tarth has never been a traditional Game of Thrones woman, in either body or mindset. She is mocked mercilessly for her looks, and dubbed Brienne the Beauty. This beauty now has a beast on the horizon, throwing her very suggestive but genuine looks of love. Giving Brienne a love interest allows her to grow into a more rounded character. It also can explore new sectors of her personality. Meek Missandei criticizes Tyrion for claiming to know the struggle of a slave because he was one for all of a week. Gilly stands up to Sam’s terrifying father in “Blood of My Blood.” Most impressively, Melisandre keeps her clothes on for a majority of season six. The one instance she is nude in “The Red Woman” is plot related. Now that is progress.

However, the greatest enemy to women on Game of Thrones is the writers. The writers’ occasional carelessness with its characters is shown through Arya’s season six plot. It was inevitable Arya would not become no one. She’s too consumed with avenging her family. The surprise is on the viewer at how poorly her plot is handled. She spends most of season six getting the crap smacked out of her and watching a play. Then, after choosing to be Arya Stark again, she strolls through Braavos without a care in the world and is stabbed by the Waif. It completely goes against her character arc to be that trusting of a stranger when she knows the faceless men want her dead. Even her final showdown with her current nemesis the Waif is not shown.

Arya isn’t the only Stark girl at the mercy of Game of Thrones writers. With Littlefinger planted in Winterfell, he’s likely to cause friction between Sansa and Jon Snow in season seven. Or, as it would be more accurately described as, unnecessary filler drama. One would think with his track record, only an idiot would be foolish enough to trust him. Then again, Sansa Stark is a special girl. The writers have backpedaled on her character development once before, and they may very well do it again.

Overall though, the women of Game of Thrones have declared victory over season six. Not only are they key focal points of the story’s primarily male narrative, but they overall morph into more dynamic characters. It was Cersei Lannister who said, “When you play the game of thrones, you win or you die. There is no middle ground.” There are many female contenders in the game of thrones, wanting revenge and glory. Season seven of Game of Thrones is bound to be drenched in bloodshed, and delivered by its female characters.

What did you think of season six of Game of Thrones? Are you excited Brienne of Tarth is finally getting some romance in her life? Sound off in the comments or send us your thoughts on Twitter!