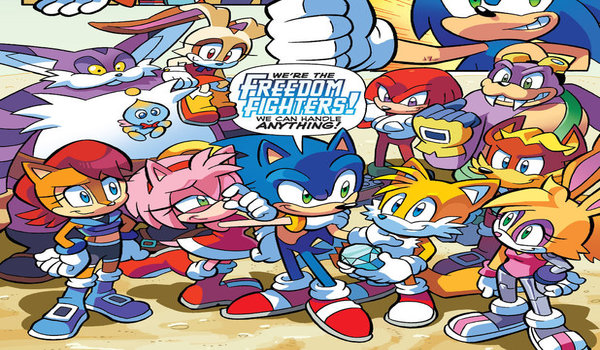 In this day and age, the concept of a “cinematic universe” is becoming common place and viable source of income for film studios. Marvel is leading the way with DC Comics tumbling its way down to pick up the slack, while we have the promise of seven to eight other shared universes to come – a new Universal Monsters franchise, a Godzilla/King Kong crossover, Transformers and Star Wars both are building up to expanding into them, and both Hasbro and Hanna-Barbera of all studios want to jump aboard the band wagon. What next? Warner Bros. hijacking Harry Potter to create a young Dumbledore prequel? Then again, that might be fun to watch.

Anyway, the idea of this series of articles is to imagine numerous franchises and see how they could be interpreted as their own cinematic universes. To kick things off: Sonic the Hedgehog. The Blue Blur has had quite the expansive franchise, but most of that is often overlooked and he is sadly only seen as a nostalgic character whose glory days ended around 2001. I’ve seen the best and worst of the very divisive fanbase and the franchise itself, but there has always been the seeds of an interesting story, fully explored in the “SatAM” animated series and the Archie Comics.

A daring, sometimes dark and adult venture existentially a fight between freedom and tyranny. A very American-relatable story. Sonic and his friends form a freedom fighter group against Dr. Robotnik who is essentially the dictatorial ruler of the world, enslaving prisoners and citizens by forcefully roboticizing them into obedient machines. The whole “little animals in the Badniks” from the games becomes something truly terrifying. Like the Borg but without a shared consciousness . Sadly the cartoon got cancelled and the comics underwent an unfortunate but reasonable New 52-style reboot, but the basic story still remains. I believe this would be a good scenario to place Sonic and co. in, exploring a more thrilling story, set in what is technically a post-apocalyptic future, that could give the MCU a run for its money.

Now for this imaginary pitch, let’s just pretend that Sega would giving complete creative control to moi and there were no limiting copyright issues connected to the comics. To wit, a major writer of the American comics was Ken Penders who established much of the comic’s universe and characters. However, when Sega released Sonic Chronicles, Penders sued by Sega and Archie for infringing on his copyrighted characters.  Both sued back, and it led to the removal of all of his characters and a complete continuity reboot of the comic with only certain characters remembering the original universe. Now let’s pretend that the lawsuits never happened and all of the characters still existed in this universe pitch.

The groundwork of the franchise would be sweet and simple, beginning with a small cast and the battle between Sonic’s freedom fighters and Dr. Robotnik’s (or Eggman) empire. Our band of heroes would be the underdogs compared to Eggman’s giant industrial juggernaut, living in the tiny hidden forest village of Knothole and would go on their first major operation against Robotnik in the first movie. The heroes consists of Sonic (portrayed as cocky and virtuous but has to learn about responsibility), Sally Acorn (the Princess Leia but more cautious), Antoine D’Coolette (snooty French rival to Sonic), Bunnie Rabbot (half-roboticized rabbit), Rotor (tech walrus),  and Nicole (Sally’s personal computer). Tails and Amy Rose would be around to be future members.

The other films would expand the universe and mythos of the story, introducing Knuckles the Echidna, the floating island, the Chaos Emeralds and the reach of their own power. There would be a key victory in the second film with Robotnik’s defeat but the rise of new villains previously suppressed while he was in control. Knuckles would get his own spin-off with the Chaotix gang and introduce the rich mythos of the echidnas sadly removed from the comics. Robotnik would also receive a dark origin story akin in tone to Rise of the Planet of the Apes, exploring his rise from lowly scientist to, well, Robo-Stalin. A key element of the story would be Sonic and Sally’s relationship, a close but turbulent romantic one.

Phase Two would further expand the world, primarily focusing on the mythology of the echidnas, using elements from Sonic Adventure (the destruction of their empire by the deity Chaos), and the comics, introducing the evil entity called Enerjak, an alter ego for corrupt echidnas; one of which would be Knuckles. The chaos would allow Dr. Robotnik to gain a decisive victory against the Freedom Fighters, leading to an unbelievable betrayal that leave our heroes scattered and on their last foundations, the fight back occurring within the first film of Phase Three.

The franchise’s box office big gun would be Shadow the Hedgehog. He is an anti-hero after all. His introductory film would be based on Sonic Adventure 02, and perhaps gain a couple more solo films in later phases. Time-travelling Silver the Hedgehog and Blaze the Cat would both make appearances in the later movies of Phase Three and have their own solo films too. I would try to incorporate the “Iblis Trigger” story elements from the dreadful Sonic ’06 game, with Sonic, Blaze, and Silver carrying the key roles from the convoluted story. The third phase would end on a level of Avengers: Infinity War, with Dr. Robotnik whipping out the Death Egg to destroy the world, but Sonic and co. take the fight to him in space. But Sonic is corrupted by the negative energy of artificial Chaos Emeralds, briefly turns evil, falling into a trap that leads to the events of Sonic Unleashed.

Further phases would delve into more comic book-y tropes, incorporating the alternate universes and multiverse of Sonic, more time travel, alien invasions, and then jumping twenty years into the future to introduce a new generation of Freedom Fighters consisting of our heroes’ descendants. The universe could also delve deeper in Sonic’s lore, taking elements from the British Sonic the Comic. And what if Sonic crossed paths with other characters from other games created by Sega? Sonic has popped up a lot in other games, and even has had two crossovers with Megaman in the Archie Comics, the second expanding to the whole of Sega and Capcom’s entire games catalogue.

At the heart of the story would be the relationships between the core characters, while never abandoning the playful humour and fun from the games. Sonic should remain a way past cool hero but go through some genuine growth (which Sega seems hellbent on preventing in at least the comics), while Dr. Robotnik should be a mix of comical and villainous tyranny. Actually make him intimidating and not a bungling idiot. The cast would obviously grow, with certain films focusing on major or supporting characters, and the antagonists would never just be evil for the sake of being evil.

In 2018, we are supposed to get an actual Sonic the Hedgehog movie but already there are warning alarms since it was announced it would be a live action/CGI film. Will this end up being like Transformers, having a human-led cast with Sonic being a supporting character in his own film? Would it be a one-off? There are rumours that gaming companies are looking to explore making movies, and it would be exciting for Sega to actually give a rat’s ass about seeing justice done to one of their franchises. Just look at what Uwe Boll did to House of the Dead.

Would you like to see Sonic or other video games get their own film franchises? Will we finally get a universally praised video game movie? Leave a comment below or on our Twitter feed.