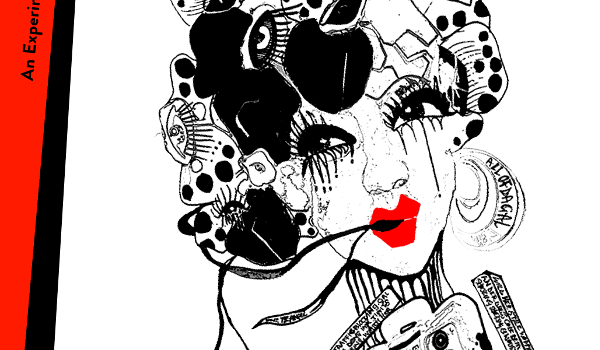 Sliced Quarterly #3 is here, and editor Ken Reynolds is suffering from two major pains in the neck – one from recent spinal surgery and the other from Brexit. But Reynold’s pain is definitely the Sliced reader’s gain, as the hauteur of indie comics delivers the most brilliant, funniest, most moving and all round most-mostest issue yet.

It would take me a literal month of Sundays to summarise all that’s great about Sliced #3, but seeing as topicality is foremost among its virtues, that would be a waste of column inches and time that could be spent reading the ‘zine.

For those of you unfamiliar with Sliced, each issue is a compendium of interesting “slice of life” tales by emerging comic book writers and artists – many of whom come from genre backgrounds. The publication offers a chance to try out ideas outside the realm of, as Reynolds puts it, the “zombies and monsters” of their traditional milieu. As the editor of sci-fi compendium 100% Biodegradable and writer of the supernatural thriller Cognition, Reynolds respects genre but understands that comics creators often find themselves with tales that fall outside the remit of the sci-fi narrative they might be working on.

Sometimes, in life or in thought, something happens and one just needs to bung it down on paper. And the last few months have indeed brought some heavy real-world shizzle to deal with. Sliced#3 is right in the thick of it.

Some strips deal directly with the current political climate. Kathryn Briggs‘ achingly beautiful graph-paper-and-pencil story “Alle Meine Neue Woerter Sind Libensmittel” offers a snapshot of a Middle-Eastern woman, forced by UKBA rules out of Britain, as she attempts to adjust to life in Germany. The measured simplicity of the artwork, coupled with the honesty of the story is gripping. Her boss is not unkind. The patrons of the restaurant in which she works as a waitress (despite having two degrees) are cold rather than confrontational. There are no moustache twirling villains, just the banal evil of politically-motivated legislation and the sense of dislocation created by a failure of language. As Briggs’ heroine so eloquently puts it, “my retrospective appreciation for every immigrant I’ve ever encountered is exponentially increased with every order I fuck up”. It is as if the drawings have grown organically from the narrator’s failure to describe with words the sense of isolation she feels.

“Texit”, by previous contributor Simon Mackie, tackles the subject of Britain’s withdrawal from Europe head on, with a hilarious, neon bright satire that could be the lovechild of Dr Strangelove and Escape From New York. The strip touches upon issues of not only Brexit, but also the Scottish referendum and the vagaries of American populist politics. The sight of an octogenarian Donald Trump maintaining his grip on power despite the ravages of advanced dementia are particularly disturbing to a pinko liberal like me (I’m so left leaning these days, you’d think I’d just had a stroke). The strip could be the basis for a sharp satirical movie in the mould of Idiocracy. It’s brash, bold and brilliant and I recommend every politician read it (or have a secretary read it to them, as I assume they are mostly illiterate) before triggering Article 50.

Other contributors have offered an inspiringly broad range of strips that, while not as directly topical, all capture something of the current zeitgeist.

The ravening beasts of Tom Mortimer and John Osborn‘s atmospheric “Hyenas” are probably not a direct metaphor for UKIP, nor is Osborn and artist Maximilian Meier‘s poignant “Epigraph”  a symbolic representation of Britain facing a Great Depression era style decline…but the vibe is right. Fictional poet Thomas Park D’Invilliers appears as the malign spirit of F. Scott Fitzgerald‘s alcoholism, urging him to “wear the gold hat if you think it will move her”. Who’s “her”? Theresa May? Probably not, but perhaps we are all experiencing a giddy recklessness in the face of future uncertainty?

In “Final Reality”, writer Dominic B. Aveiro and artist Ben Peter Johnson offer us an escape route from the mundane actual world into an equally mundane virtual world; only for that world to descend into a technicolour nightmare/wet dream/Hieronymous Bosch vision of hell. A snotty teenager eats crisps while imagining a world of toilet-Tetris in a witty art-mirrors-life-mirrors-art again shocker that left me feeling pleased that I still can’t work the DVD player.

Narrative also goes awry in the David Hailwood (script) and Brett Burbridge (art) yarn, “The Ballad Of Backwards Billy”, as ne’er-do-well Billy follows his life goals from grave to cradle. The gorgeous turquoise-and-black artwork is reminiscent of the horror comics of the 1950s and a pitch perfect evocation of mood. The rhyming couplets have a simplicity that belies the consistent and clever idea at the heart of this back-to-front story. “Be pure and true at the start of life or meet a sticky end” warns Billy. Wise words for a regressive age.

But it’s not all doom and gloom and cautionary tales. The small press review offers tantalising snippets of work by Rats And Crows publishing, Rob Cannon and the ever life-affirming Lukas Kowalckzuk. In “Crowdsurfing”, Jon Laight (script) and Rory Donald (art) mine the eternal, bittersweet optimism of the would be artist. Anyone who has ever tried to crowd-fund an art project will know the frustration of scanning the horizon for an audience one knows is out there but can’t quite reach (We’ll find them though, right?).

Finally, in “Aufklarung” by S.K. Moore, we are presented with a fantastic vision of enlightenment that makes all the pettiness of politics recede into the background. His recurring protagonist, a man with a head covered with newspaper print, stands in awe before a square sunrise. Part Rene Magritte, part Moebius, it is a strip of other-worldly beauty that reminds of the transcendence of art.

To those of us who understand that comics are an art form every bit as important as that on the walls of a portrait gallery (more, if you factor in that people actively enjoy opening a comic), Sliced #3 offers us a chance to reflect upon, process and interpret the world around, or as Reynolds puts it, “to make sense of the world through fiction, through narrative”. Ultimately, Reynold’s was saved from spinal surgery and Brexit despair by “very good (prescription) drugs and the novels of Terry Pratchett“. I could say the same about Sliced Quarterly #3.

Have you check out Sliced Quarterly yet? Let us know in the comments section or send us a Tweet!