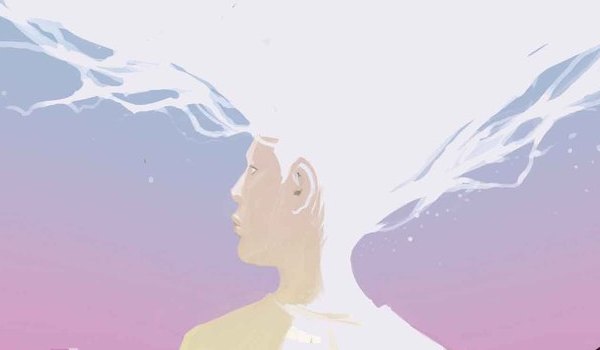 Los Angeles: a city of hope, dreams, and prop designers wanting to bring their sex-dolls to life. So… plausible? Well, that’s at least the Los Angeles in Neil Gibson’s Tabatha. This four-part series follows four twenty-somethings that stumble into a madman’s little barbershop of movie props, and must use their wits and pop-culture references to survive. Tabatha delivers a dark, beautifully-illustrated thriller, at first. However, as the story reveals more behind its curtain, its tone wavers and by the final panel, Tabatha loses its edge.

The comic begins with the delightfully awkward Luke out on the job, delivering packages to wacky residents of L.A. Luke moonlights as a petty thief with his brother Fin, Fin’s girlfriend Bailey, and her brother Ty. On their first night of thievery, the four break into a home stuffed with film props. They play around the prop shop and mess with a mannequin. The merriment is cut short when Luke finds a cooler full of female body parts. Before they grow a conscious and call the police, the madman known as Gustav snatches them one by one for abusing his doll. The friends become trapped in his quest to bring the titular Tabatha to life.

This review would be completely different if I were just reviewing the first issue. The first issue is fantastic. Luke, though not the most complex protagonist, is easy to like, and his pension for finding himself in uncomfortable situations is amusing. Having the villain’s hideout be a film prop shop is a unique setting and gives the artist multiple opportunities to add subtle film/television references; although, my inner theatre nerd was having a spasm at seeing Julia Robert’s Pretty Woman dress in a prop shop when it rightfully belongs in a costume shop. Okay, theatre moment over. The best feature is the perfect mix of suspense and creepiness. My mouth was literally gaping at the end of issue one, and I was excited to dive deeper into the twistedTabatha.

Instead of building on that suspense, Gibson doubles down on spending quality time with Luke’s one dimensional friends. They are, in a nutshell, distractingly stupid. Besides the fact their criminal prowess is essentially on par with Harry and Marv from Home Alone, they’re just not compelling characters. Gibson attempts to develop his characters, showing Bailey and Ty’s sick mom and Fin and Luke’s relationship, but it comes off as halfhearted. Perhaps more focus should have been placed on, oh, I don’t know, Tabatha? I do like the ambiguity of whether she is alive or not, as well as Gustav’s origin flashback, even if it’s tad long. It’s confusing then as to why she, arguably the most important character, gets such a small role. It’s possible there wasn’t enough time with jamming in such comedic gems as calling Fin gay for enjoying the Backstreet Boys. Oh, the hilarity.

Additionally, Tabatha’s tone shifts as the story trudges onward. It feels like Tabatha can’t decide what exactly it wants to be – dark thriller or satire. The scenes of legitimate horror are too far and few when crammed between scenes of Luke’s friends. Once everyone is at the prop shop, be that a prisoner or proprietor, the scenes split between Gustav villainy and banter, and it feels too disjointed. It’s like two different comic books duking it out for sole tonal custody. Some comics are able to wonderfully blend horror with comedy, but in this case, Tabatha is in the midst of an identity crisis.

The great mystery within Tabatha is whether she’s actually alive or Gustav is completely deranged. However, the mystery I’m enthralled by is who the comic’s artist is. It doesn’t take much internet digging to discover who once held the title of illustrator. Whoever ‘The Artist’ is, they deserve props. The artwork uses pops of color creatively to detail the comic. One clever detail especially is allowing Gustav to interact with Tabatha through his rose-colored glasses. Not only that, but the perspective in those scenes is directly Gustav’s, tinting those panels in rose. While sometimes the artist sacrifices background details, the artwork for Tabatha is one of its best assets.

Overall, Tabatha never lets up on its creepiness, but it’s bogged down by the story’s heroes. While the first issue captures the essence of an exceptionally dark thriller, the rest of the series, unfortunately, doesn’t live up to the hype.

Fan of Neil Gibson? Have you read Tabatha? Comment below or, as always, voice your thoughts on Twitter!