Home » SMALLTEMBER: 6 Reasons You Should be Reading Afterlife Inc. 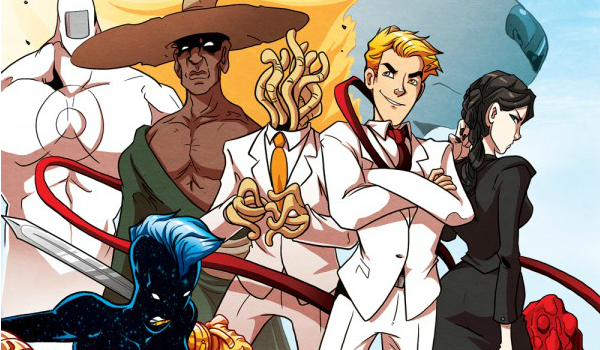 In today’s myth-busting Internet culture, Jon Lock‘s Afterlife Inc. retains a sense of mystery that’s a welcome blast of fresh air. It’s concept alone is an intoxicating one. Afterlife Inc. follows the misadventures of Jack Fortune, a former con-man who claims the afterlife for himself and converts it into a corporate business. Armed with a motley crew of angels, aliens, and other creatures of all shapes and sizes that help him carry out his corporate mission, Jack’s adventures often land him in hot water, but his adventures are always thoroughly entertaining to read.

Three volumes and one crossover in, creator Jon Lock is currently funding Afterlife Inc.‘s fourth volume, Man Made God, on Kickstarter, so let’s countdown six reasons you should be reading this wonderfully unique series!

6. A Company You Can Believe In 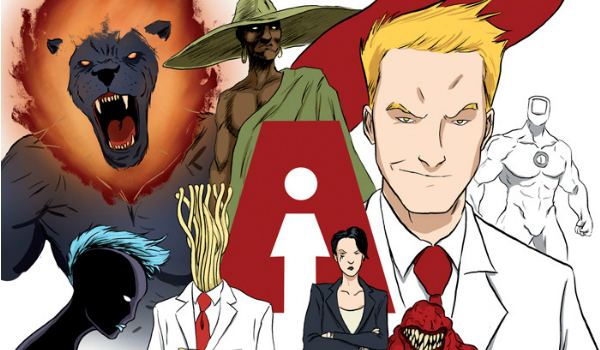 Right from the word go, Afterlife Inc. has the power to win you over with an thrillingly original concept. However, such a concept is entwined with a never-ending sense of mystery – how does one man achieve the impossible and steal the afterlife for himself? That’s the question Man Made God appears ready to answer, meaning that the forthcoming volume will hopefully strike a balance between expanding on the concept of Afterlife Inc. without loosing its enchanting mystery.

Spinning off from that, a good mystery is bound to keep a reader hooked until the very last page. Will Man Made God, with its promise of comeuppance for Jack from the afterlife’s real owners, solve that mystery once and for all? We’ll have to wait and see… 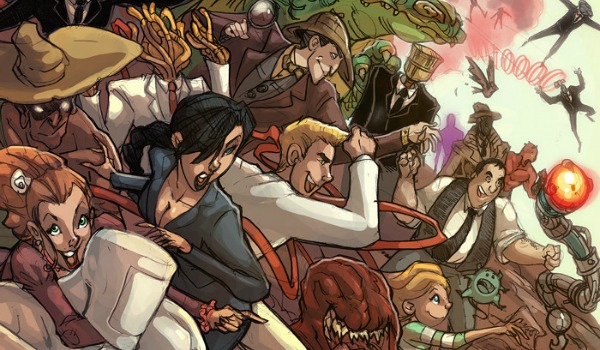 Although there’s a clear structure to each of Afterlife Inc.‘s core three volumes, they each follow an anthology nature, particularly Afterlife Inc.‘s first volume, Dying to Tell, with each story standing on its own whilst being illustrated by different artists from the indie comics scene.

Not unlike that other great indie comic Torsobear, Afterlife Inc. displays a maturity that sees Lock willing to take a creative risk by making each individual story so different from each other that they have the power to detract and attract equally to the reader. Despite this, each volume stands as a cohesive whole, with a very definite beginning, middle and end, offering the reader an immensely rewarding read. 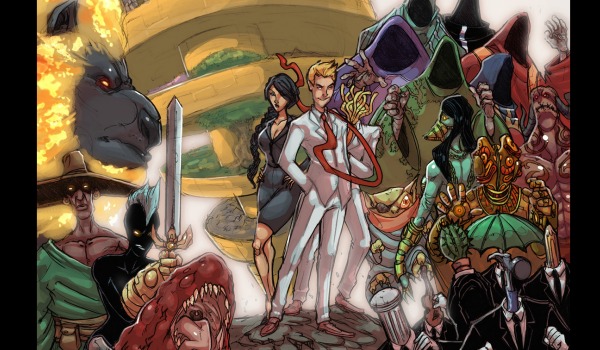 Something that really brings life into Afterlife Inc., if you’ll pardon the pun, is the rich tapestry of artistic talent who make the various characters and locales in Afterlife Inc. so stunning. Jack Tempest and Ash Jackson regularly lend their robust talents to Afterlife Inc.‘s various volumes – Tempest’s style has a soft warmth to it, with bright, vivid colours and sketch-like detailing. Jackson’s art is sharper, snappier, but just as good, with an emphasis on precise shading and stripped-back detailing.

The bulk of Afterlife Inc.‘s artists share a rugged, unpolished attitude to illustrating the world, which in other comics may seem overly unkempt. However, such styles match the vigorous, tongue-in-cheek attitude of Afterlife Inc., as well as adding to its full throttle action and wry sense of humour. 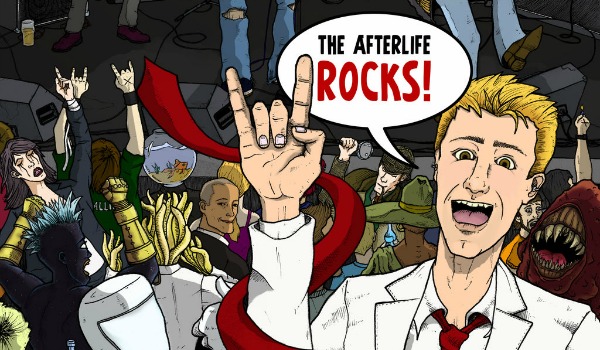 In an ideal world, your comic’s stories are just as good as your comic’s artwork. Thank the makers for Afterlife Inc. then! Harking back to the anthology feel of Afterlife Inc., such a tactic as that allows a greater diversity in stories to come forth. Lock’s preference for varying styles of story-telling, which do build and build together with more serialised-esque plots as the volumes continue, match the diverse artwork splendidly.

Not every story portrays Jack as the lovable anti-hero he may appear to be. Some take a left turn and paint a far darker and cryptic profile of his character. Not every story is even seen in Jack’s eyes either. Dying to Tell, for example, is littered with hard-boiled noir sagas and child-like fairy-tales of individuals who cross paths with Jack and the afterlife, often unintentionally.

Further volumes do go the extra mile and are more ambitious with multi-part stories, but part of Afterlife Inc.‘s charm is how eclectic the stories themselves can be.

2. The World of the Afterlife 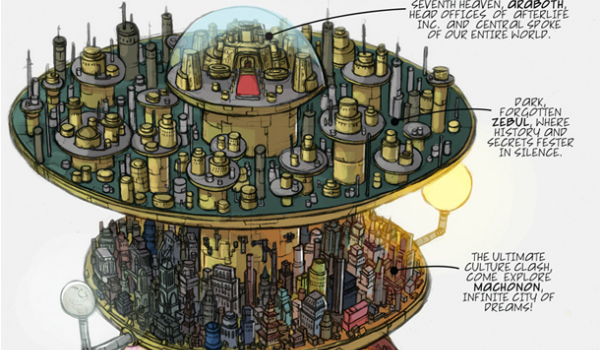 Something I’ve noticed in my time of being a fly-on-the-wall of the U.K.’s indie comics scene is just how many creators seem to adore the concept of world-building. Afterlife Inc., Brett Uren‘s Torsobear, Nic Angell‘s 7String, Mike Garely‘s The Kill Screen and almost certainly more comics that I’ve yet to experience feel obsessed with crafting world you can get lost in.

No matter how fantastical these worlds are, they majority of them are so well-planned out that you can easily believe in them, and Afterlife Inc. is no exception. Afterlife Inc. itself takes place on the Empyrean, a satellite-esque platform that defies normal measurement. There are seven levels to the Empyrean, and its a dazzling mixture of neon-lit metropolises, golden infrastructures, pastel gardens, a psychologically-messed up wasteland that’s half heaven/half hell, and more.

Discovering these worlds as Afterlife Inc.‘s story develops is more than enough fun, but there’s an added layer to it. Jon’s dedication to bringing out every element of this world he’s created harks back to how the anthology nature of Afterlife Inc. has the ability to be a genuinely rewarding read. The diversity in locales opens up the world of Afterlife Inc. to endless possibilities, which Jon expertly takes advantage of volume after volume.

1. A Sense of Mystery 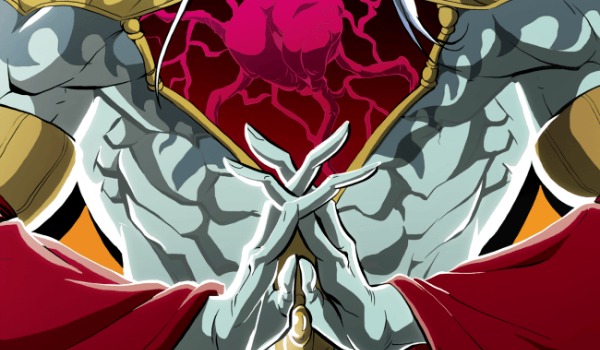 All of the above reasons come together into a mystery-laden comic that sucks you in and won’t let you escape. It’s as if you’ve fallen into the afterlife itself. Throughout the comic, you’re left asking the same questions over and over again – how did Jack obtain the afterlife for himself? How did he manage to bring together so many creatures, societies and worlds into a tense utopia? In age-old story-telling, some things are better left unsaid.

Afterlife Inc. has engrossing stories, interesting characters, and sublime artwork, but it’s all anchored on the idea that the whole comic has this mystery to it that you’re desperate to discover, and equally desperate to not let such a discovery spoil the atmosphere of the book.

So many creatures and worlds float in and out of Afterlife Inc. that it would be a shame to have that mystery debunked completely. As mentioned, a little mystery goes a long way. Nothing is overly revealed through clunky exposition, and little is left dangling or unfinished. There’s a balance that suggests Jon, and perhaps only Jon, is the guy with the secrets to the afterlife. He knows what the mystery is behind Afterlife Inc., and so he knows how much, or how little, to reveal as the story progresses.

Will the beans finally be spilt with Man Made God? Looks like we’ll have to just back it on Kickstarter to find out!

Have you read Afterlife Inc.? Are you a fan of the series? Let us know in the comments section below or send us a Tweet!