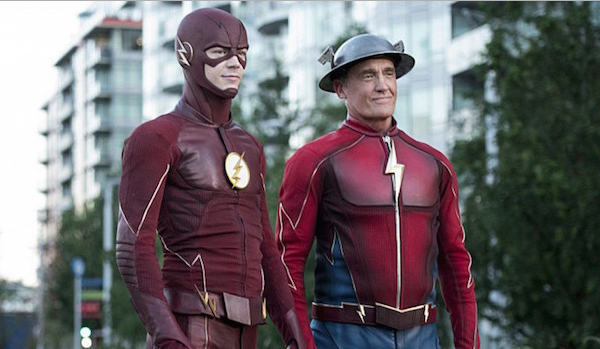 It seems to me like the third season of The Flash doesn’t have that same spark and pizzazz as the first two seasons. Don’t get me wrong – I’ve enjoyed what we’ve seen so far, but I’m not AS excited to tune into the show as I was the last two years. Maybe it’s because there isn’t anything groundbreaking so far this season, and it’s honestly starting to feel a bit repetitive. I’m going to cut it some slack since we’re only two episodes deep, but I still feel like the show has to work extra hard in the coming weeks to keep my interest. Thankfully, the recent episode, “Paradox”, had more good moments than bad. (spoilers ahead!)

As we saw at the end of the last episode, Barry has fixed the timeline in an effort to return everything back to normal. However, it seems there are some drastic changes now. Not only is Iris not talking to her father (after he kept Francine’s existence a secret from her for so long), but we find out that Cisco’s brother Dante was killed by a drunk driver, and Cisco resents Barry for not going back in time to save him. Throughout the episode, we see more and more changes to the timeline thanks to Barry’s interference. Some of these changes are subtle, such as Diggle now having a son, and other are pretty huge, such as the arrival of Julian Dorn, a meta-human CSI working alongside Barry. And then there are the WTF changes, like Caitlin revealing her hidden ice powers.

I like how the show slowly built up these changes instead of throwing them at us all at once. It makes me excited to see what other changes will become apparent in the next few episodes. Maybe we’ll find out that Ronnie never died in this timeline? Maybe we’ll learn that Captain Cold never became a villain and instead used his powers for good (a nice little nod to the Flashpoint comic arc). Either way, I just hope the show keeps throwing us these curveballs week after week. They better not have give us everything all at once!

The biggest change to the timeline has to be the introduction of Julian Dorn. Ever since Tom Felton was cast in the role, people speculated whether he would be just a small cameo, or if he would actually turn out to be a major villain or hero. If you’ve been following updates on the show, the popular theory going around is that Julian is secretly Alchemy, a new villain who is bound to give the Flash a run for his money this season. Now, while I don’t mind entertaining the idea of Julian really being Alchemy, I don’t think we should jump to any conclusions yet. After all, The Flash has done an exceptional job at surprising us with villain identities. For all we know, Julian is just another red herring. He could actually be Arthur Curry or something. Wouldn’t that be a neat little plot twist? I mean, he definitely has the arrogance and attitude for it… 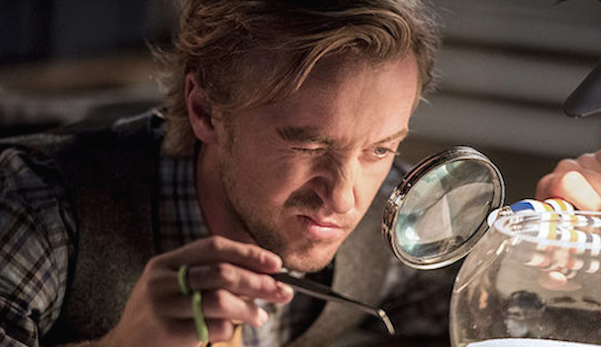 The plot of the episode felt a little dry for me. While Barry is attempting to come to terms with this new world he created, Edward Clariss is having flashbacks (flash-sideways?) of the Flashpoint universe, where he was the Rival. He eventually encounters Alchemy, a hooded monk-like metahuman with special magical abilities (and voiced by the terrific Tobin Bell), who grants him his speedster powers from Flashpoint. At first, I kinda rolled my eyes and thought, “Oh, great – another speedster villain. Whoopee.” But by the end of the episode, you see the Rival was only the beginning. It seems that Alchemy might actually be the main baddie of the season. His whole goal is to grant the metahumans from Flashpoint their powers back in order to carry out his mysterious master plan. That means that we’ll be seeing Alchemy pulling the strings behind the scenes throughout the season, but I hope we get to see him in action as well.

There were two notable scenes that I really enjoyed from this episode. First, Barry tries to go back yet again to fix the timeline. But he’s stopped by Jay Garrick, who pulls him out of the timeline in the mid-90s and gives him a stern lecture. This scene was so powerful because of the fact that Jay Garrick is Barry’s dad’s doppelganger, and even though they had only met once before, you can tell there’s a strong father-son relationship in there. The performances from both Grant Gustin and John Wesley Shipp were stellar, and I think we’d all welcome more of these kinds of scenes in future episodes.

The other scene I wanted to point out was the final battle with Alchemy and the Rival versus the Flash. As you can guess, Flash gets his ass kicked for most of the fight, but Cisco (who has forgiven him for not going back to save his brother) shows up and uses his vibe powers to save the day. After the fight, the two briefly discuss future team-ups, which I know we’re all excited to see, but it might be a while before we see another collaboration between the Flash and Vibe.

Oh, one more interesting note about the episode – Caitlin’s secret. There’s a brief shot of Caitlin demonstrating her ice powers (similar to those of her Earth 2 counterpart, Killer Frost) right before the end of the episode. This begs the question – did Alchemy give Caitlin her powers, or did she somehow manifest them on her own after the events of Flashpoint? I don’t care what the answer is, but I sure hope we get to see plenty of great ice-based fights this season!

This episode had a lot going on, and while it may have felt very rushed and hectic at some points, I still think it was decent. I may just be biased since I love the show so much, but I feel like there’s a lot of potential to be had this season, even with the rocky start.

+ Finally – a major villain who isn’t a speedster!

+ I liked seeing Cisco and Barry team up to take down the Rival.

+ The scene with Jay Garrick and Barry was excellent.

– It feels like these first two episodes of this season escalated way too quickly. I would’ve preferred a little build-up

– I found Felicity’s involvement in this episode to be completely unnecessary; while Felicity has become much more bearable this season, I don’t see why they had to force her into this episode.

– Cisco got over his brother’s death rather quickly. I thought this subplot would spill over to at least one more episode. They better touch on it again sometime in the future.

– Poor Tom Felton is doomed to always play a douchebag.

– I’m anxious to see how exactly Flashpoint caused Julian to show up to CCPD.

– I hope Harrison Wells makes an appearance this season!

Do you think The Flash‘s third season is off to a good start? What are your thoughts on the new characters? Let us know in the comments or on Twitter!