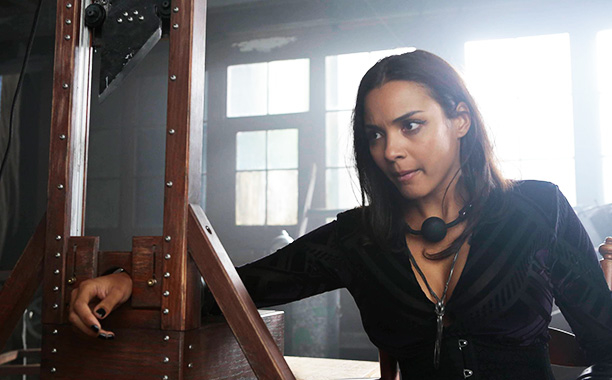 There’s a ticking time bomb on Gotham tonight in more ways than one.

We recap with Isabella’s death, and Ed’s subsequent decision that Butch has murdered her. Butch meanwhile has been living it large hiding with Tabitha, somewhere unknown. Bruce, Selina and Ivy are also hiding, this time from would be assassins after the emerald necklace Ivy stole. Lee, Jim, and Carmine Falcone featured too in the preview – this show is going to be good!

Lee and Mario are at a restaurant, with Mario’s father, Carmine Falcone. They’re going to get married in two days. Time is moving at a snail’s pace as usual in Gotham. At this rate, we’ll have watched an entire season and they’ll have moved to the end of the week.

It’s a posh restaurant, and Roberto, a friend of Carmine’s, is the chef. They chat about Barnes, and Lee says that the lab investigating the virus in Alice’s blood has devised a test to determine if someone has been infected. Mario is very interested it seems, even beyond just a professional level. Meanwhile, dinner is over, and they move out to the car. Roberto tells Carmine he will get their car, and…BOOM! It blows up! Next thing we know, Jim is on the scene talking with Don Falcone, who are discussing whether or not it might be an old score that needs settling, that maybe people think Carmine is coming out of retirement. Jim tells him to chill. Not sure Carmine likes that idea much.

On the other side of town Penguin is having a meeting of the five families, discussing the protection racket that they will have to re-establish now that Barnes is out of action. Suddenly Barbara bursts in wondering what happened to her invitation – seems it’s been lost in the post. Babs informs Penguin that Tabitha and Butch are missing – like properly missing. Tabs was protecting Butch, they were a couple again, and they were hiding out somewhere, but she was supposed to call Babs every night – and hadn’t the night before. Everyone draws their guns on each other – then Olga the maid comes in. Penguin threatens to have Olga clean Babs up…so she puts the gun down – then calls Oswald PENGY!! I’ve only been calling him that since season 1!

The meeting is over, and Oswald calls Ed, asking if he’s finished yet. Ed has been recuperating by torturing Butch and Tabs. He’s got ballgags in their mouths and attaches an electrified headband to Butch, and has devised an ingenious guillotine device, which has a timer attached to it. He puts Tab’s hand in it, and she’s able to stop it by pressing a button. Unfortunately, if she presses the button, Butch gets a fatal electric shock. It’s a variation on what Jervis Tetch pulled on Jim a few weeks back – a test of love. If Tab really loves Butch, she’ll let her hand be chopped off. If she loves her hand more…

Back at GCPD, Bullock is acting captain, and it isn’t sitting well with him. Meanwhile, Lucius Fox has found the composition of the bomb which blue up Carmine’s car was a pretty complex mix – and Bullock, showing why he’s acting captain and not Jim – knows exactly who’s behind it, a chap by the name of ‘Fuse’, who’s an “ex-military nutjob”. They race over to his apartment but it’s too late. Fuse is lying in a pool of his own blood. He’s still warm, so they realise that whoever killed him didn’t want anyone tripping over any loose ends. Jim finds a file full of times and locations and realises it’s not Carmine they’re after – it’s MARIO. I told you that guy’s days are numbered!

Mario’s at Gotham City Hospital and a motor cycle with two people on comes zooming towards him. The pillion passenger is wielding a mahoosive machete like knife is aiming to slash him in two. Thankfully Jim is on the scene, and shoots at them, and they roar off.

Back at Wayne Manor, Alfred is cooking up a feast for Selina and Bruce. It’s a bit too fancy for Selina as she turns up her nose at it, and wonders why she can’t go home. Bruce explains that it’s not safe for them to go anywhere for the time being. Meanwhile, Ivy is in the conservatory. She wants to “put some plants outside” and asks Alfred to turn off the burglar alarms so she can leave. Of course, he won’t, so she uses her feminine wiles on him – and a bit of her crafty plant magic – and he does everything she asks.

Jim and Mario are back at GCPD, where Mario claims he has no enemies, he’s as clean as a whistle. Of course, Jim is suggesting they call the wedding off, so Lee will stay safe – but of course Mario doesn’t quite see it that way. There’s something strange about Mario…what could it be…Jim asks Bullock to look after Mario, while he goes to talk to Carmine.

Babs meanwhile is at Pengy’s house, and chatting up Olga to find out some information. She gives Olga a gorgeous ring, and in return, Olga lets on that Oswald fancies Ed big time. This is sweet news to Barbara’s ears. Olga doesn’t like Ed and has no hesitation in letting Babs know that he had a special delivery from a shop called “Stocks and Bondage”. Of course it’s no surprise that Barbara is very familiar with the place.

At Wayne Manor Selina soaks the key from the necklace in vinegar and baking soda, and discovers there is an owl on the top. They realise Ivy is gone, and the phone rings and sure enough, the bad guys have her, and they want the necklace. They set off to a warehouse place in the Batmobile…sorry, the Rolls, and find Ivy is tied up. Bruce says he wants to talk to Catherine, the head of the Court of Owls. The chief bad guy reveals that the Court of Owls aren’t their friends either, and that they are actually called the Whisper Gang, and are at war with the Court of Owls. The key is one of two, the other in Catherine’s possession. Bruce suggests an alliance.

Jim and Carmine are discussing Mario. Bullock calls to say that Mario has gone – and Jim, who is almost as fleet of foot as Barnes was last week – knows instantly where he is – he’s at the jewellery store picking up the wedding rings. Suddenly the assassins are there as well, and Jim and Mario get one. Mario however is overcome with rage and just pummels the assassin to death. This seems altogether too familiar. 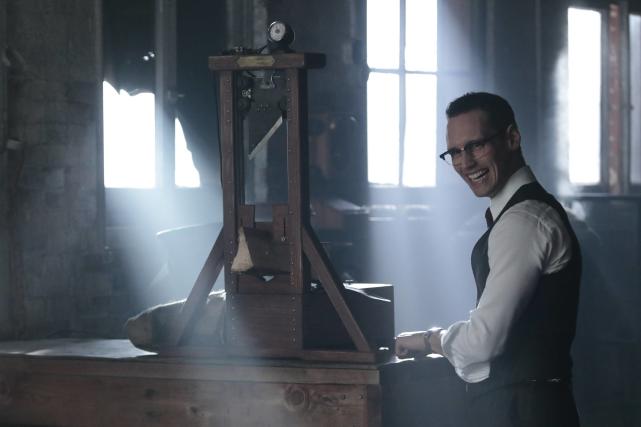 Babs is at Stocks and Bondage and cajoles Todd, the sales assistant, who I must say is wearing very lovely eyeliner, into letting her know the combination of the safe, containing Ed’s location. Oh did I say cajole? I meant she puts him in the stocks and whips him to get the info out of him. Ed is torturing Butch, who suddenly rants that he was glad to shoot Isabella. Suddenly Ed realises it’s not Butch who did it after all. Tab allows her hand to be chopped off as she’s decided she really does love Butch for saying that. Babs arrives just in time, and she takes Butch and Tab to the hospital to get her hand reattached.

Carmine is with Jim, Bullock, and Mario. The other assassin is in the interview room. Carmine goes in and does a bit of dental surgery. Surprise surprise the assassin has a tooth engraved with – an owl. The plot thickens even more when next we see him in a car with Catherine. She won’t tell him why they wanted Mario killed, but basically he’s not happy that it means he’s her man now.

Lee drops by to see Jim on the way to the rehearsal dinner. She asks him to tell her what he’s needed to tell her. Come on Jim! But no – he says he’s missed his chance. And then Lee…kisses him. And leaves. Meanwhile outside…Mario is watching. The rage is welling up inside him, you could even say the blood is boiling inside him. The voices in his head are saying (hang on – voices in his head?? Surely not…) “She loves me and I won’t let her go…” A couple of hoodlums approach him and he snaps. “SHE LOVES ME” SNAP! One dead hoodlum. “AND I WON’T LET HER GO” Pow! Two dead hoodlums.

Final rating: A+ We’re definitely back on track!

Last thoughts: How has Mario got infected by the Alice Virus??