Home » REVIEW: Rachael Smith’s Wired Up Wrong Is Like Ice Cream in the Rain 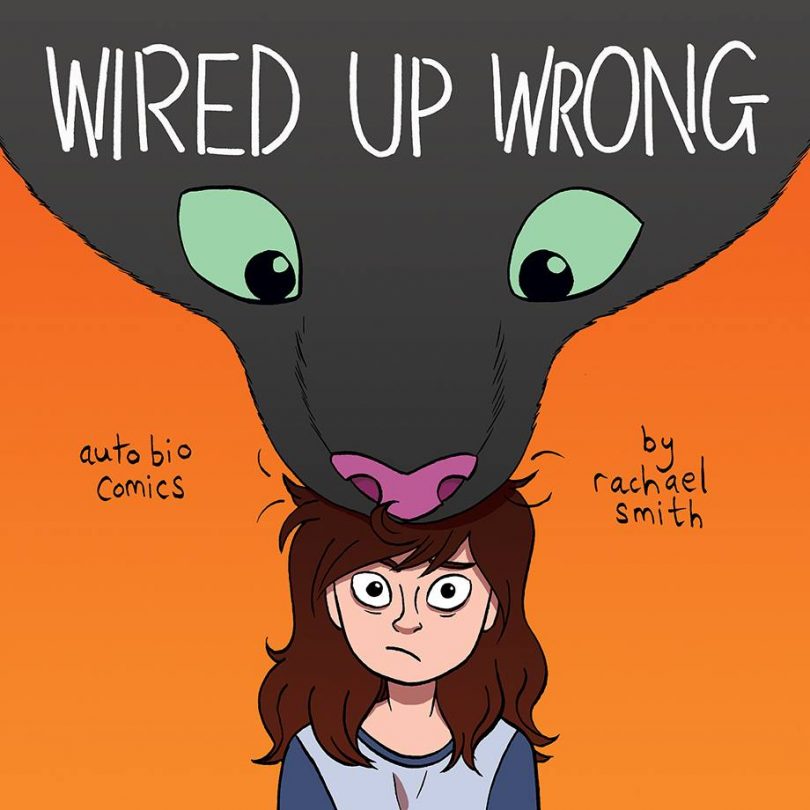 Have you ever had that moment where you’ve been looking forward to a comic for so long that when you finally get your hands on it you blow through it so fast that you just have to review it just so you have an excuse to go back over every little detail and enjoy it all over again?

But I have been looking forward to Rachael Smith‘s Wired Up Wrong ever since she announced it. And let me tell you – it’s worth that return trip.

Unlike her previous books, Wired Up Wrong is not a linear story. Instead, it consists of autobiographical glimpses into Rachael’s life and mind. Much like her Patreon diary comic (which I highly recommend as well), each page is a self-contained story. The vignettes add up to an ending I found highly satisfying and significantly more uplifting than I expected.

The book stars Rachael (of course), her boyfriend Adam, her cat Rufus, and Barky, the big black dog that personifies her insecurities and anxieties.

Oh right, almost forgot: this is a book about mental health issues.

Because while Rachael’s depression is ever present throughout, it’s also easy to overlook. Rachael’s cute, simple style and bright colour palette are almost enough to conceal the rather serious issues at hand. It doesn’t hurt that Rachael clearly has a good sense of humour about herself too.

Speaking of humour, some of my favourite pages were those featuring the two game show hosts that live in Rachael’s head. The duo spin the “Wheel of Feels” to determine her emotions and humourously demonstrates the utter randomness of feelings. One panel in particular is sure to get a laugh.

The page that stands out to me as the perfect representation of the book comes when Rachael’s friend Gary talks to her about the pleasure of eating ice cream in the rain. While the main point of the page is that Rachael is too insecure to do things like that in public because people would stare, the idea of ice cream in the rain is a nice metaphor. It’s a treat in the midst of a storm, just like Wired Up Wrong itself. Even when the world is cold and grey and coming at you from all sides, it’s still possible to enjoy your ice cream. 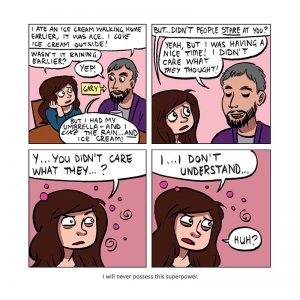 The real success of Wired Up Wrong is that it’s Rachael’s own way of putting herself on display for the whole world to see. She may say she will never possess the superpower to not care what people think, but publishing this book means she must have gotten over that insecurity to at least some extent. It takes a lot of courage to pull back the curtain and show the world your true self – especially when that self is anxious, insecure, and depressed. And that honesty makes the book even better. Rachael’s uncensored openness about her feelings and experiences makes her story that much more relatable. Sometimes, we all feel like we have to push that big, black dog out of the way just to go outside.

But once you’re out, you can have some ice cream in the rain.

Treat yourself to Wired Up Wrong by pre-ordering a copy on Rachael’s Etsy page. Or if you’re headed to Thoughtbubble, stop by Table 183 in New Dock Hall.