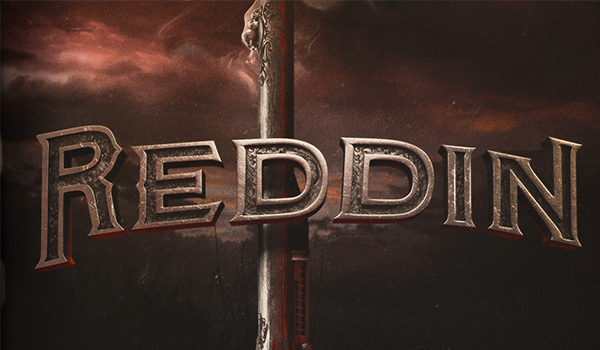 If you are a fan of either the Western genre or the Horror genre, then no doubt you are going to be a fan of Reddin, a genre-mashing graphic novel from Dead Canary Comics, written by Matt Fitch & C.S. Baker, and illustrated by Conor Boyle. Right from the first page, it is very clear this is a story created by people who truly love the genres they are working in, and the proof is in the pudding as you read this story.

Reddin is the story of Dean Driver and Karl Kirkwood (some of the better names to come about in recent memory), two bounty hunters in the Old West who are living the cowboy dream: saving captives, shooting bad guys, telling stories, and drinking whiskey. However, the dream quickly turns into a nightmare when on a routine rescue mission, Dean is falls into a mine shaft and Karl’s only option is to leave him behind.

But Dean is not dead. An evil spirit that calls itself Reddin saves Dean from death’s door, but only if Dean kills Karl for leaving him for dead.

The rest of the story details Dean’s journey from town to town looking for his old partner, killing anyone in his path. And boy does Dean kill. Imbued with the powers of Reddin, Dean is literally a killer possessed. Eventually, Dean finds Karl, but is unable to kill his old friend to appease the demon. Dean makes the ultimate choice and kills himself instead, freeing himself and defeating Reddin.

Reddin is a simple story, but in this particular case, I don’t mind at all. In fact, it fits the sparse nature of the genres it is written in. As mentioned before, Reddin is very heavy into its genres. The Western elements of the story are present in every line of dialogue and every line on the illustrations. The chilling moments of Horror that pepper the story blend together with the Western elements creating a seamless mash-up that will impress fans of either genre.

Conor Boyle does a stellar job at making the story come alive through his rustic images. The Western colour palette of reds, blacks, and browns paints each page as if you had found this book in 1816 rather than 2016. However, Boyle also implements an art style for the horror elements of the story that truly create a disorienting and uncomfortable feeling that remind me of the works of 30 Days of Night illustrator Ben Templesmith.

Though some may call this a “style over substance” situation, this story has enough of what you love about these types of stories to overcome any narrative shortcomings. To over-complicate this story with subplots, love interests, and other perfunctory story elements would diminish the core value of the story: friendship even in this dark, desolate world.

In the end, I wholly recommend this story to fans of genre (especially those familiar with recent Western/Horror mash-up Bone Tomahawk, and even TV series, Westworld). It will titillate all your Western and Horror senses, and leave you hoping that this isn’t the last tale you hear about Dean Driver and Karl Kirkwood.

You can find Reddin and more fantastic offerings from Dead Canary Comics in their online store.