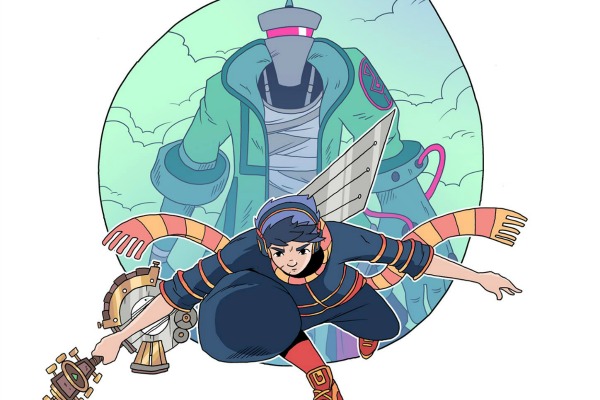 Nich Angell‘s sci-fi/fantasy/epic 7STRING has FINALLY gotten it’s third volume released in serialised form this week. In the few years that I’ve been with A Place To Hang Your Cape, and thus having been lucky enough to get a fly’s eye of the indie comic scene, 7STRING is undoubtedly one of my favourites. It has cult classic written all over the thing, dammit!

I’ve waxed lyrical about how rad 7STRING is previously, and with the first instalment of Volume 3 now let loose on the world, now’s as good a time as any to have a chat with Nich about what future adventures lie in what for Zach and the gang!

A Place To Hang Your Cape: Tell our readers a little bit about the sheer awesomeness that is 7String.

Nich Angell: 7STRING is the story of a dude with a guitar-sword, going up against an empire of Drum and Bass. It is the story of a world founded on music, called Melodia and the adventures of 4 kickass instrumentalists who must find their way in a world falling into war. Can traditional instrumentation ever stand a chance against the tempo-controlled beats of the TroubleClef? Will Zach learn the secrets of his sword and the truth about where music really comes from? Find out in the pages of 7STRING!

AP2HYC: Spinning off from that, what exactly will Volume 3 be all about?

Angell: Volume 3 is the next stage in Zach’s adventure to find the man who murdered his mother. In this volume, the 4 characters who up until now have been apart, will finally meet up! This volume also introduces a new villain, another member of Lars Troubleclef’s elite general squad, Kitt, the drum kit man. Although Vol 3 is the next episode in a continuing story, I try to make each book have its own beginning and end, and themes along the way. The themes of this book centre around strength and where that comes from.

AP2HYC: I believe there’s been a two year gap between this and Volume 2’s arrival. Why the long wait?

Angell: Because I’ve been working on loads of other awesome Big Punch stuff! Big Punch Studios is a teaming up of me and 3 other awesome creative people and the launch of what we wanted Big Punch to be has taken a lot of time and work. We have been putting out a quarterly comics magazine which I draw 2 of the stories in so I’ve been busy. Awesomely though, all of our stories take place in the same ‘Extraverse’, so I haven’t been that far away from 7STRING this whole time… 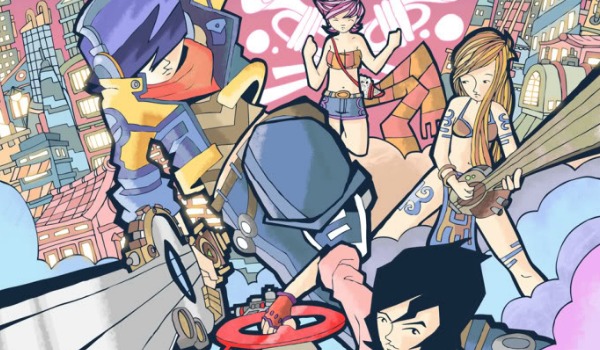 AP2HYC: We left 7STRING with Zach blitzing his way through two of Lars minions by unlocking newfound powers, whilst edging closer to himself and our other heroes Liph, Efex and Nette, meeting together in Avengers-style fashion. How exactly will Volume 3 pick up where Volume 2 finished?

Angell: Vol 3 picks up almost exactly where Vol 2 leaves off. Zach still has a second Volante Blade from his last battle with the Petal Sisters and is still in the jungles of Nocturne. Most importantly that new ability he unlocked in that battle is going to play a huge part in this book as he commands its true incredible potential. Nette and Liph are now together, flying in Liph’s awesome Mechaplane and Efex is on her way to Nocturne as we speak…

AP2HYC: And what of the villain Lars himself? He’s succeeded in unleashing civil war amongst the Clefs, but there’s a sense that our four heroes may join together to stop him. How will his devious reign of terror develop in Volume 3?

Angell: Volume 3 teaches us a little of his motivations, what he believes and why he was so keen to plunge Melodia into war. We will also see a few flashbacks to his past and what makes him such a despicable creature when it comes to training his generals!

AP2HYC: How exactly do you manage to balance all these characters whilst keeping Zach’s story central to the overall plot?

Angell: Haha! Lots of planning, and lots of notes. I won’t lie, I’m learning as I go. I consume a lot of stories and I watch or read them from a very analytical perspective. How did they do that? Why is that narrative event so significant, how did they build that significance? Zach’s story is always going to be the most central as the whole saga is about him opening up, emotionally. That is why the other characters are so important as they will help him to do that. They are his first friends. That keeps the spotlight firmly on Zach while allowing me to explore a little about who the others are at the same time. It is challenging though and I’m constantly revising and tweaking as I go. 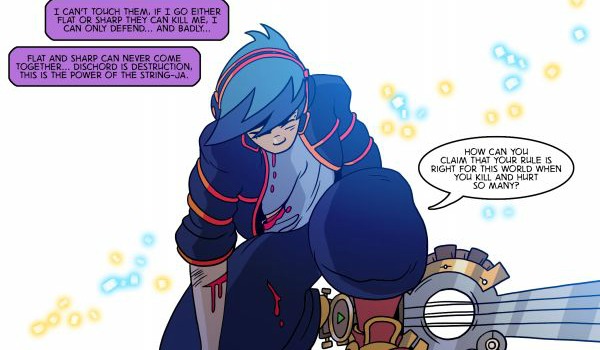 AP2HYC: Aside from characters, the world of 7STRING itself is just divine. Will we be seeing more of Melodia in action?

Angell: Thank you! Yes absolutely, we go to some very exciting places and discover some new cultural aspects too. You will learn about the Musikii, strange musical creatures from beyond the veil, and you will see ‘The Record’, a colossal stone disc spinning in the jungle recording all of the world’s events like a huge vinyl disc!

AP2HYC: We’ve seen Zach grow as a warrior since Track 1, but it’s clearly not over yet. What dangers might he be facing in Volume 3?

Angell: He will face his fiercest opponent in Kitt. I don’t want to give anything away at this stage but its lucky he has some new techniques up his sleeve, otherwise he wouldn’t stand a chance against the unique battle style that Kitt employs. How can one man command an entire drum kit?

Angell: I think Volume 3 is my best constructed story yet and I do better character work in this one than the other two. You will hopefully get to know the characters much better in this one, like really know them. I also think the art has taken a big step forward.

AP2HYC: And what of any more potential multiverse shenanigans – will we see a sequel to The Heavenly Chord, the crossover between 7STRING and Afterlife Inc.?

Angell: Big Punch has some massive Extraversal plans in the pipeline… and 7STRING is definitely involved. The place to see that though will be in our magazine and we are building up to this huge story throughout 2017. You can read all the episodes of our magazine on our website bigpunchstudios.com so you’re all caught up and ready for the big event!

AP2HYC: What’s been the most rewarding thing about working on 7STRING for you?

Angell: 7STRING started life as a way to combine everything I love in one place. Comics, music, action and adventure… (and a bit of Zelda!) but the best and most rewarding thing about it has been always having this thing to be thinking about and coming up with awesome things for. I’ll be driving home and I’ll suddenly get this great idea for a Tremor Clef artefact or a TroubleClef attack. Because I have this world, this context, it is great fun to come up with new and awesome things within it! 7STRING is fun through and through and I hope some of that comes across when you read it!

Have you read 7STRING? Are you a fan of the series? Let us know in the comments section below or send us a Tweet! You can read the first page of Volume 3 here!