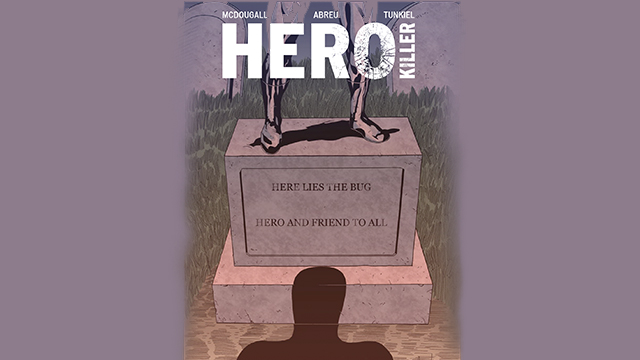 Ever since I reviewed the first issue of Hero Killer, I have been anxiously awaiting its follow-up to see where this interesting mystery was heading. While this issue boasted the same sharp illustrations/colouring and solid dialogue, I can’t help but feel a little let down by this second issue. That said: there is nothing necessarily bad or wrong about Hero Killer #2, it’s just that for a series that I thought was taking an interesting take on familiar theme, there was nothing new brought to this story by this issue.

The plot, much like the first issue, is simple and direct to the point. The superheroes mourn the loss of The Bug, their murdered comrade, by gathering together at his funeral. Meanwhile, Detective Marquez continues her unsanctioned investigation into the murderer of the The Bug, believing that this is definitely the work of a serial killer. Marquez meets Captain Power at The Bug’s funeral urging him to let her help out with the investigation. Contrasting the previous issue, Captain Power is open to the idea of Marquez working with the Cowled Knight to find the killer quicker, showing a growing anxiety not yet seen for the character. And his anxiety is warranted as Captain Power finds out that the Cowled Knight has already been killed by the hero killer.

Now, I say again, there is nothing wrong with this issue. All the elements that I liked from issue #1 are here, it’s just that nothing new is. I’m starting to see this more as an issue of editing than actually story-writing. After all the issues of Hero Killer are released, I feel that this will be a story best read in full like a graphic novel, much like the similarly themed Watchmen. As of now, issues like this one feel like simply a filler to the rest of a bigger story.

I previously posited the idea that this series is a satire of the superhero genre (and its overabundance in culture), and I still believe I am correct in this assessment. This idea is what intrigued me to the series in the first place and it is what really set this story apart from commonly themed stories. That is why I am still ever-excited to see where this series goes from here. There is so much potential here for something bigger that I hope things pay off. As the story goes on, and more heroes are killed, will we see superheroes look at their own mortality? Question whether they have the right to be seen as so far above normals?

I surely hope that these things do come up as they are questions I believe need to be asked. Not just by this comic, but by people everywhere. Should comics only be dominated by superhero comics? Same with superhero movies. Should we hold excessive reverence for those who police us or fight the bigger battle? It is a touchy subject, but I’m always supportive for art that does ask those harder-to-ask questions. I still believe Hero Killer has all the intentions of asking them. I hope I’m not wrong.

What did you think of Hero Killer #2? Sound off in the comments and reach out on Twitter!