Home » REVIEW: Rogue One: A Star Wars Story – A Darker Journey Into the Star Wars Universe 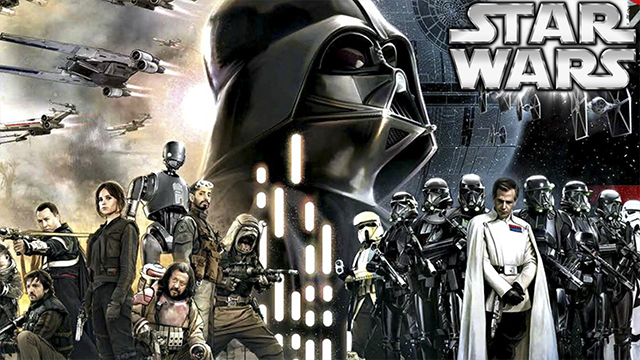 NOTE: SPOILERS, ALL OF THEM.

Right from the beginning of Rogue One: A Star Wars Story, we are cued into the fact that this is going to be a different experience, or more apt, an alternative experience compared to the normal Star Wars fare.

The normal LucasFilms logo comes on the screen, but following it, there is no John Williams fanfare. Instead we are jump cut right to a planet and pan up to a ship entering the frame. Right off the bat, we know that we cannot rely on our normal conventions of Star Wars to safely guide us through this story.

Because, rather than following the normal guidelines for the film series, Rogue One instead opts for a storyline more akin to a war film a la The Dirty Dozen or The Magnificent Seven. For those fanboys that the previous sentence is causing you vomit in your mouth, rest easy, this is not a film bereft of Star Wars flair. Rogue One indeed is a film full of fan service that earns its spot in the Star Wars canon and in fact, retroactively makes the original film, A New Hope, better (but more on that later).

On the planet from the opening of the film, we are introduced to Jyn Erso as a young girl, living with her father Galen and Lyra Erso (Mads Mikkelsen and Valene Kane, respectively) as farmers when an Imperial ship lands before them. Out from the ship comes Orson Krennic (played wonderfully diabolical by Ben Mendelsohn), Director of Weapons Research for the Empire. Krennic lets us know that Galen Erso was the former Chief Engineer for the Empire’s weapons programs and he is there to bring him back to work on the Empire’s next weapon, The Death Star. Galen, a redemptive man right from the start, tries to decline but Krennic, an evil man right from the start, kills Lyra and kidnaps Galen while Jyn escapes into the care of Saw Gerrara (played by Forest Whitaker), a Clone War veteran and ally of Galen.

Fifteen years later, the story really begins, with an adult Jyn (now played by Felicity Jones), in Imperial captivity. Jones plays Jyn as a woman with a tough shell and a big heart, and although this sounds good on paper, I have to admit that she may have been one of the weaker elements of the story. Her character lacks a depth that the trailers implied. She does indeed become a tough Rebel warrior who inspires a rag-tag bunch of Rebels to go on a suicide mission, but the story seems to end on the implication that this is all just make her father proud. While this is a nice sentiment, some more layers to Jyn’s story and just a hint of inner conflict would have risen this character to that of The Force Awakens’ Rey. That said, Jones drives this story, and strong characterization or not, you are happy to be with her for the journey.

From the jail breakout, we are one-by-one introduced to the other members of the Rogue One squadron (not their official name until later in the story, but for ease of writing). There is Cassian Andor (Diego Luna), a Rebel officer whose moral ambiguity puts early Han Solo to shame; K-2SO (voiced by Alan Tudyk), a formal Imperial enforcer droid who has been reprogrammed to steal every scene with his comic relief; Chirrut Imwe (Donnie Yen), a blind warrior who believes that he has a strong connection with the Force; Baze Malibus (Jiang Wen), Chirrut’s partner and mercenary with a big gun; and Bodhi Rook (Riz Ahmed), a former Imperial pilot who defects to the Rebels in order to bring Calen Erso’s message to Saw Gerrera, who is now a militant extremist. The Rogue One group is captured by Saw, but this gives Jyn a chance to see the message her father left letting her know his location.

This message is Calen Erso’s confession that he has been secretly working against the Empire this whole time by intentionally building the Death Star with a design flaw that will cause the weapon to self-destruct if set off. With this small bit of dialogue, writers Tony Gilroy and Chris Weitz have ended years of trash talk against George Lucas‘ seemingly deus ex machina way of having the Rebels win in A New Hope.

Speaking of Death Star, Krennic is having his own woes trying to get his project approved by the Emperor and Darth Vader. This is mainly due to negative feedback from back from the dead villain, Peter Cushing‘s Grand Moff Tarkin (Utilizing CGI in ways far beyond what have been done before. I can’t stress enough how well this was done), who is just as smarmy and evil as ever. Tarkin is ever unimpressed by Krennic’s Death Star and urges Krennic to test the weapon out in the hopes that it will fail. When the Death Star test is successful (destroying Saw Gerrera’s base as the Rogue One group escapes), Tarkin decides that he will be taking over all operations of the Death Star, and in turn, taking all the glory. Even with being dead for 22 years, Cushing’s Moff Tarkin is still one of the best villains out there. Of course, he cannot be topped by the ultimate villain, Darth Vader (James Earl Jones showing us that he can still nail the voice), who reinstates Krennic in control of the project, but not before force-choking him a bit.

Now knowing where Calen is, the group heads to the Imperial’s engineering planet to try and get the plans from Calen that will help the Rebels destroy the Death Star. Unbeknownst to Jyn, Cassian has orders from the Rebels to kill Calen in the hopes this will impede the Death Star’s full operation. The plan goes topsy-turvy when Krennic arrives to question Calen about the message that was sent out with a Bodhi, and the scene turns into a firefight. Calen is killed in an explosion, and the Rogue One group head home empty-handed and downtrodden.

Jyn knows that the plans to the Death Star are in the Empire’s high-security data bank and proposes that the Rebels go down and steal them. The Rebel council has no way of verifying her story and rejects her plan. Lucky for Jyn, the rag-tag bunch of compadres she has been with have her back, and they gather some other Rebellion soldiers who believe in her cause. The group, now officially calling their ship Rogue One, heads to the data planet for the final battle.

It is in this final act, this final battle, that Rogue One really shines. I would go as far as to say that the final act is some of the best that the entire Star Wars series has to offer. For this reason, I will not go into great detail about what happens. So just the cliff notes. It is a grand battle, utilizing every member of the group’s talents and bringing their arcs to a satisfying conclusion. Obviously, the group does succeed in transferring the Death star schematics to the Rebels, and Krennic receives his comeuppance. Darth Vader makes another appearance that had everyone in the theater shouting “WHOA.” And the story ends with another surprise character appearance that closes the film leaving everyone in chills. Director Gareth Edwards (Monsters, Godzilla) really pulls together a stellar piece of filmmaking throughout the film, but it is in this last act that we see he is a force to be reckoned with.

Rogue One is not perfect. The first act feels somewhat like it’s ripping off Guardians of the Galaxy, and Forest Whitaker’s Saw seems like he is doing an impression of Dennis Hopper’s character in Blue Velvet rather than just an homage, but the last act will definitely make you forgive any small problems you had beforehand. It takes you back to the feeling you first had when you watched A New Hope, literally. Watch it, and you’ll see what I mean.

Perhaps though, even beyond the chills and the nostalgia trip Rogue One puts you through, the most important thing that this film says is about the binary nature of war. Previous to this film, things have been pretty black and white. Rebels = Good, Empire = Bad. Rogue One posits that this, of course, isn’t that simple. Saw represents the extremist side of the Rebellion that seems just as bad as the worst of the Empire. In turn, both Bodhi, Galen, and K-2SO are former Imperials who saw that their side was wrong and had to fight against it. Even on the less extreme sides of things, Cassian Andor admits that him, along with many other Rebels, have done awful things for the sake of the Rebellion. Rogue One makes the altruistic statement that the fight should be us vs. them, Rebels vs. Empire, Democrat vs. Republican, it should be simply the fight for what is good and the hope that doing so provides. Seems like a good mantra to live by, huh?

What did you think of Rogue One? Another big hit for the renaissance of Star Wars? Or just good ol’ memberberries? Let us know in the comments or shout out on Twitter!