Home » Which Superhero Would Make A Good Santa Claus? 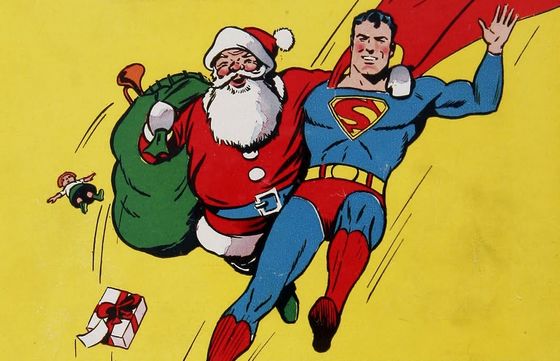 If you think about it, Santa Claus is a superhero. He is widely regarded as a figure of joy and inspiration, possesses magical powers, can fly around the world using reindeer and deliver presents to every single child during one night. But what if other superheroes had to take on the role of Old St. Nick. Say, in a “what if” scenario, Santa is indisposed for Christmas Eve, like he is ill or a supervillain kidnaps him. Someone would have to take his role to ensure the kiddies get their presents. But which superhero could make a good stand-in for Santa?

Now, the most immediate idea that comes to mind would be just for a bunch of superheroes to team up and deliver the presents to every corner of the Earth using their powers. Problem solved. Well, let’s be a bit more creative. Instead, the role can only be handled by one singular hero. Another major factor to the choice is that they only have Christmas Eve to pull the job off. However, because Santa apparently can defy time and the night remains eternal until he is done, it also may limit the candidates.

The more mortal superheroes such as Batman and Iron Man would make excellent Santas if not for that pesky time limit. Both are billionaire industrialists, have major resources and influence in the business world, both are friends to big superhero leagues, and have technology that allow them to fly and perform superhuman feats. Batman would be pretty good at sneaking into houses to deliver gifts and is good with kids, while Iron Man would likely crash in through a window while playing AC/DC tracks. However, Batman remains mostly in Gotham, and Iron Man may not be the most reliable and safest of superheroes. Thankfully, there are better choices.

Superman would likely be the ideal candidate. His costume of red and blue would be perfect to pose as Santa, he can fly at unbelievable speeds, and can get places in the blink of an eye. His superhuman strength, speed, and flight capabilities would make the reindeer and sleigh redundant, since he could likely carry Santa’s sack between his toes. However, perhaps Superman isn’t the best choice. Trying to gently get down a chimney and landing on a rooftop could end up destroying a house considering his power. Not to mention if he gets attacked by an angry dog or house owner, those heat beams could set a Christmas tree on fire.

Alternatively, there is the Flash. His costume is mostly red, so there is one thumbs up. Another is the Flash’s unbeaten super speed. This guy could likely complete deliveries in a matter of minutes, and no one would know he had even been in their house beyond the delivered presents. Flash can also time travel and jump dimensions, so he could easily repeat his Christmas run if necessary as long as he doesn’t cross his own timeline. But, while Flash is quick on his feet, how exactly would be carry all of those presents? He doesn’t have superhuman strength like Superman, so say goodbye to his arms.

Perhaps Mr. Fantastic would be a good candidate? Not only is he a genius, so he could devise some way to send gifts to everyone in the world simultaneously. He has the Fantasticar to get around quickly, and would be the perfect candidate to get down those pesky chimneys without get stuck, dying, or outright destroying it. However, the other members of the Fantastic Four would need a role. Susan Storm could easily help with making the Fantasticar invisible, but the Human Torch and the Thing would likely cause more havoc than good.

Maybe this just isn’t a man’s job. What if the hat and sleigh were handed over to Wonder Woman. She seems like a pretty good choice. She possesses similar powers to Superman, is ageless, could handle that heavy sack with little issue, and best of all, she flies around in an invisible jet. However, if she had to use Donner and Blitzen, she has that covered. In the post-Crisis on Infinite Earths universe, Diana receives a blessing from the Greek goddess Artemis, allowing her to talk to animals. She could easily befriend the reindeer and even prevent guard dogs from attacking her when she visits homes. Sounds perfect.

Santa relies heavily on magic. And which superhero is the master of magic? Doctor Strange, of course. His Cloak of Levitation allows him to fly, and the Book of Vishanti gives him access to the world’s light magic, and there must be a spell in there that would allow him to get where he needs to go without getting tired. Plus, Strange also has a photographic memory, so if the naughty and nice list had to be consulted, no problemo, for he would have already memorised the entire thing. In the 2016 film, Doctor Strange wields the Eye of Agamotto, which double as the Time Infinity Stone, allowing him to rewind and pause time. A perfect item to use when you have one night to do the ultimate delivery of post.

Nightcrawler would be a good one, since he could just teleport from the North Pole into houses with effortless ease. Well, not quite. According to Wikipedia, Nightcrawler can teleport up to two miles under normal circumstances, but can overcome this. His furthest distance teleported was 413 miles from Las Vegas to San Francisco. This move nearly killed him. So, perhaps the trust mutant would not be the best option despite his handy dandy superpower.

But, perhaps the best choice to be Santa Claus is a superhero often overlooked and forgotten. One of those quirky, unusual heroes created by Jack Kirby: The Silver Surfer. He can travel through hyperspace and at the speed of light. He can create portals to different locations, and phase through solid matter. The presents wouldn’t be destroyed by the speed friction, since the Surfer could just place them safely within his very indestructible surfboard. And though he has done a lot of bad things, Silver Surfer is a character driven by heavy morals and would be willing to fulfil the duty of Santa Claus.

Which superhero do you think would make a good Santa Claus? Leave a comment below or on our Twitter feed.