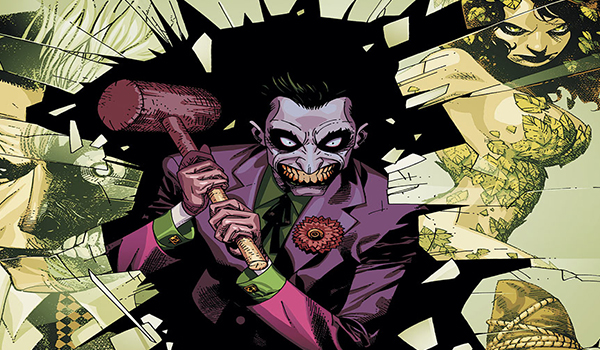 I got into comics late in the game. In fact, I didn’t begin to pay attention to them until after The Dark Knight was released in theatres. Like many, the dreadful repercussions of Heath Ledger’s performance as The Joker intrigued me. I was fascinated by the idea of someone locking themselves in a hotel room, immersing themselves in comic books in order to figure out just who their character is. Perhaps it was my age. Perhaps it was the fact that The Dark Knight focused on my favourite superhero. Perhaps it was the media covering this film. Perhaps it was just dumb luck. Regardless, I found myself wanting to learn more about these characters: where they originated from, what sort of other stories were surrounding them.

I walked into Barnes and Noble unsure of what I was looking for. I knew graphic novels were next to the manga I often read and that was about it. I walked in expecting to be judged for wanting to read graphic novels after a hit blockbuster had just come out. I expected to be judged for being a young high school girl. And, luckily for me, I was proven wrong. Instead, I found myself talking with a Barnes and Noble salesperson who started to pick out graphic novels that were good introductions to the Batman lore.

But that wasn’t all. Within just five minutes of us looking through what the store had to offer, another customer was passing by and before I knew it, they were both helping me pick out what to read first. I settled on Batman: Joker’s Asylum. As I walked away towards the counter, I caught of glimpse of both men shaking hands and properly introducing themselves to one another. It was by far one of the most pleasant, bizarre situations I have ever gone through at any store. Two complete strangers coming together to help another person enter the world of comics.

After my Batman craze, I moved on to stories that were more in line with the genre of books I read. It was then I discovered Sandman. Neil Gaiman‘s writing spoke to me in part because I had discovered that many of the creative stories I was writing for class were similar in terms of tone and genre to his own work. It was as if I was meant to discover this author and I largely discovered him through his comics. Not just Sandman but all his other graphic novels.

Comics aren’t just a method of escapism, our new mythology, or our new way of storytelling. While all these are equally important and interesting in their own right, comic books do something a little bit more special. Like many high fan-based media, comics bring people together. It’s a way for us to communicate not only with each other but between an artist and a consumer. It’s brings a sense of comradery, one that is unique to its art form.
What do comics mean to you? Share in the comics below or send us your thoughts on Twitter!