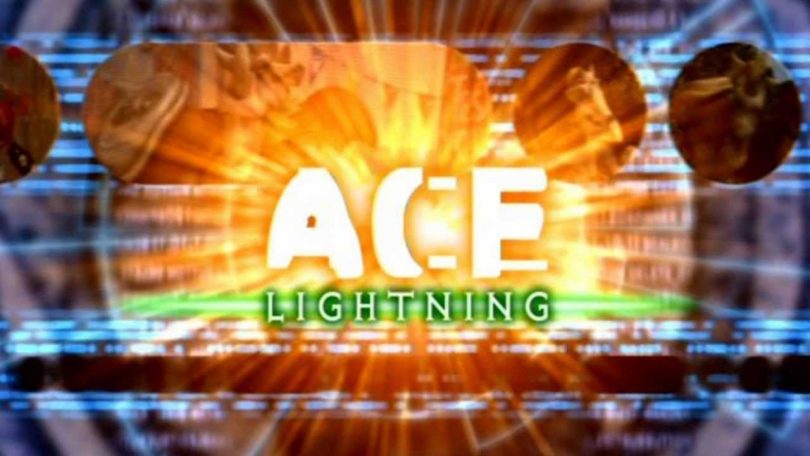 Everyone has that one childhood TV show that they remember, but no one else does. Mine is Ace Lightning, a British-Canadian show that aired on CBBC in 2002. A fun, though sometimes cheesy, show about video game characters that come to life in the real world, which makes life very complicated for our very Peter Parker-esque protagonist Mark Hollander. The series lasted thirty-nine episodes before being canned, but I have remained a lifelong fan to this day, as have a small and dedicated fan base. So, I decided to revisit Ace Lightning and hammer out a list of the top ten episodes of this short-lived series.

Mark Hollander is a British teenager who moves to America with his parents. A bolt of lightning strikes his house while he plays his favourite video game, which somehow causes the characters to emerge into the real world. Ace Lightning, a superhero who serves as the player’s in-game character, recruits Mark as his reluctant sidekick to help thwart the evil Lord Fear. Their mission is to send Lord Fear and his cronies back to an inter-dimensional prison, as well as retrieve the pieces of the mystical Amulet of Zoar, which Lord Fear wants to use to take over the world. The series explored the growth of the game characters in the real world and Mark as he juggles family, school, romance, and being a superhero’s sidekick — life is no game after all.

Disclaimer: This list and opinions in it do not represent the entirety of AP2HYC. This list also contains major spoilers for the series. Read at your own discretion. 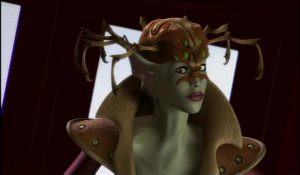 One of the few two-parters of the series was the third and fourth episodes. In The Substitute, Mark’s science teacher Mr Cheseborough is abducted by Lord Fear and replaced by the shape-shifting Lady Illusion to steal Mark’s piece of the Amulet. The episode begins with an exciting car chase between a school bus and an ice cream van, with both Ace Lightning and Lord Fear getting in on the child-friendly chaos.

In the follow up, Mark has to face detention with the villain in disguise; fortunately, Ace Lightning manages to get into the school disguised as a janitor. The detention is shown through a musical montage, but I enjoyed the interplay between Mark and Lady Illusion as they stare one another down, and the inevitable fight between them. 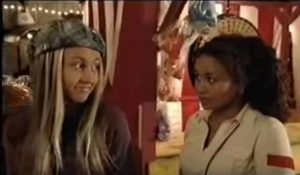 Perhaps the most pivotal episode of the second season, Choices, tackles the ongoing love triangle between Mark, his old flame Samantha Thompson, and new crush Kat Adams. Some fans were not thrilled with Kat’s arrival, who described her as a “Mary Sue”; however, opinions have since changed. Mark has a difficult choice to make, though Samantha has her own news to share — she is dating a new boyfriend and encourages Mark to pursue Kat. The wrap up of Mark and Samantha’s romance is well-handled with great, mature performances from both actors, though there is a hint that the door is still open. In the subplot, Lady Illusion has to decide where her loyalties lie, with Ace (who is her lover) or with her fellow bad guys. 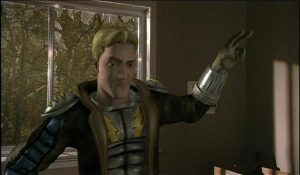 From the very first shot and the intriguing hint at a hidden level in Mark’s video game, the pilot episode hits the ground running. It sets up the story in spectacular style when a lightning bolt strikes Mark’s house and the characters from the video game jump out of his satellite dish only to start fighting in his backyard. The series introduces most of the major characters and the challenges Mark will face. There are a lot of great scenes in the episode, but my favourite has to be Ace’s speech about being a hero, implying that there all types of heroes — “just going somewhere new takes a lot of courage”. I also love that it has a cliffhanger right off the bat, perhaps that is how they convinced the BBC to give them the green light. 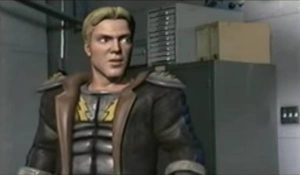 The final episode ends the series on a high note. Kilobyte’s plan to imprison mankind in the game world kicks off, but in a surprise move, Ace and Lord Fear join forces to defeat him. Mark also sneaks into the carnival to track down the captured Kat, while villains run riot. There are tons of great moments in this episode:

I won’t give away what happens in the closing minutes, but it definitely is the definition of what makes a hero. 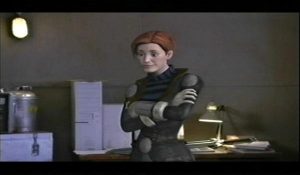 Public hysteria is nothing new in the world, but superheroes being mistaken for aliens may take the cake. Chuck accidentally records Sparx flying overhead and believes she is an alien, causing the town to put on their tinfoil hats. In the meantime, the maniacal jester Googler gets lost in town, which leads to a tense encounter with Mark and Mr Cheseborough when they construct an alien-detecting machine. Ace and Sparx come to the rescue, but in the following fight, Googler’s puppets blast Sparx back into the game with her own sword. Seeing your favourite character “die” onscreen was a rather harrowing thing to watch for the then-young audience. Another great scene involves Mark and Samantha as they discuss the odds of other life existing in the world, bringing Mark close to revealing his double life. 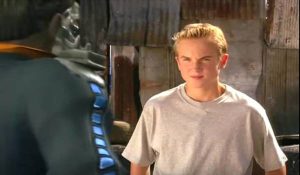 Perhaps the most compelling character in the series was Random Virus, a lightning knight grievously injured long ago and turned into a Frankenstein-esque cyborg. However, the accident split his mind in two, creating a good but fearful hero and a psychotic villain with an axe to grind. What puts this episode on the list is Mark’s courage. At first, he is terrified of Random, but later makes a stand when Dirty Rat steals Chuck’s impressive homemade robot to power Random, venturing to the junkyard to retrieve it. Though terrified, Mark stands up to the cyborg, who acknowledges his courage even when controlled by his evil side. I also love the scene where Ace reassures Random they will always be friends, even if on opposite sides of the fight. 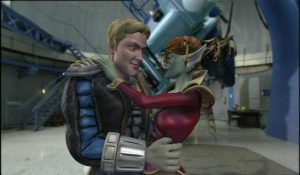 Looking back, it was a very adult move to involve a technical affair between upstanding hero Ace and villainous Lady Illusion. How often do you see that in a kid’s TV show? In this charming episode, Lady Illusion is fed up with Lord Fear’s slow progress capturing pieces of the Amulet and strikes out on her own, literally winding up in Ace’s arms. From there, they quickly fall in love and plot to run away together until a vengeful Lord Fear storms in to win back his lady. While Mark is also having some troubles with Samantha, it is the romance between Ace and Lady Illusion that makes this episode memorable. For once, Ace versus Lord Fear becomes a little bit more personal than it already was. 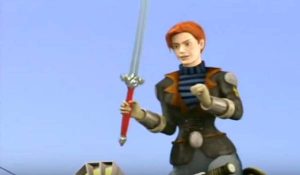 Life sucks when you are the sidekick … well, perhaps that’s only true if you are Jason Todd or Mark Hollander. Mark’s life turned upside down when Ace blasted his way in and it hits home in this episode. Mark’s grades plummet, his morale drops and his relationship with just about everyone becomes rocky. To make matters worse, Lord Fear starts stalking him to seize his piece of the Amulet. Mark is eventually dragged to the carnival and flees in panic from the villains til Ace comes to the rescue. The episode also serves as the epic introduction of Sparx, but her insulting comments to Mark’s legitimacy as a hero prompts him to finally throw in the towel and attempt to put his life back together; however, the conflict is resolved in the following episode. Nobody’s Hero has some great writing and acting, particularly from Tom Wansey. 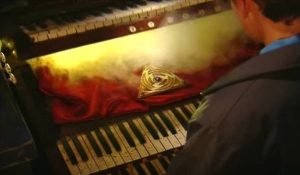 The finale of the first season brought Ace Lightning to what could have been a fitting end. All the story arcs are wrapped up, the day is won and the season seems to end on a high note. In the previous episode, Lord Fear completed the Amulet, causing the endgame of the video game to take effect. The lightning knights slowly lose their energy and have to find the Amulet or Lord Fear will win. Meanwhile, Mark has the school prom to face, but when Duff Kent, the carnival’s true owner, asks for his help, Mark ventures into the carnival during the epic final battle to find the Amulet. I found this quite a satisfying end to the first season. 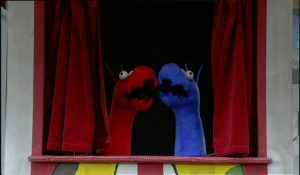 This episode makes it to the number one spot for how well it handles the show’s theme of there being different types of heroes. Lord Fear summons Googler, whose sock puppets are able to zap Ace of his superpowers, rendering him effectively human. Ace disguises himself as a cop and turns to Mark for help, who teaches him that he doesn’t need powers to save someone, as proven when he rescues Samantha from an unsafe tree house. Mark then gets kidnapped by Googler, prompting Ace to rescue him. Though Ace’s powers do return, he is prompted to finally understand what friendship means and delivers a short but sweet speech that remains in my mind to this day.

Have you watched Ace Lightning? What episodes stood out for you? Leave a comment below or on our Twitter feed.