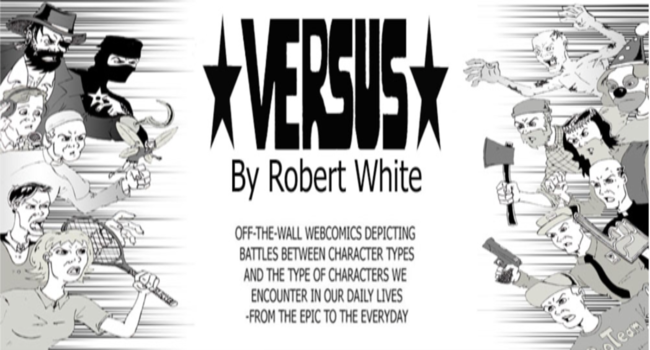 Comics, like movies, aren’t limited to just one genre. There are comedies, horror or straight up superhero series that have kept fans like me enthused over the years. Versus, a web series created by Robert White highlights the weird and wonderful side to the comic world, with his self quoted “off-the-wall” web series.

Far from having a straight forward narrative, Versus centres around, as the creator puts it, “battles between character types”. This includes epic encounters such as “Princesses Versus Brides” or “Hitmen Versus Serial Killers” with a series of hilarious quotes breaking each of the encounters apart from one another. Each encounter is broken up over one simple panel, reflecting and playing up to the stereotypes each character represents, with an addition of a deadpan quote added for great measure.

To highlight the humour and tone of the series, one of the best, and my personal favourite panels, “Cannibals Versus Tramps” plays out with the cannibal stating his delight at the “free range” food in front of him. This tone continues throughout each entry, whether they are autobiographical or a reflection on world situations. The work is both funny, but most importantly to readers, often relatable, which is the main driving point in wanting to invest more time into his work.

If Versus could be compared to anything it would be the work of Harvey Pekar, the man behind the groundbreaking autobiographical comic series “American Splendor”. If you’re unaware of his work (seriously, check it out!) then you will see some similarities in White’s work with Versus. Looking across his social media pages, White, like Pekar before him, has turned his life into comic form, which in turn has helped him establish his own voice inside the crazy world of comic books.

White updates his series on a regular basis, which is an impressive feat in itself, uploading the hilarious segments on web, which is then collected and turned into a comic series. As well as creating the series, he also draws each of the panels by hand, keeping them mostly black and white, which adds to the small, yet hilarious tone that continues throughout.

Versus is perhaps the most surreal comic that I have reviewed for A Place To Hang Your Cape. White managed to keep me hooked throughout, which is important for a creator trying to make a name for themselves. It’s because of this, and the concept, which makes it for a must see. His ideas are both smart and well thought out, making for a genuine delight to read. Simple, yet effective is the best way to describe the series, which has found itself a new fan in this writer.

You can find the series on the popular Webtoon site, as well as his own personal page, which are both updated on a regular basis. You can also support White and his series on his Patreon page.

Will you be checking the Versus series out after reading this review? As always, let us know in the comment section and on Twitter!