Home » Cadavers Book One: Doppelganger Tackles Topical Issues with a Sense of Humour 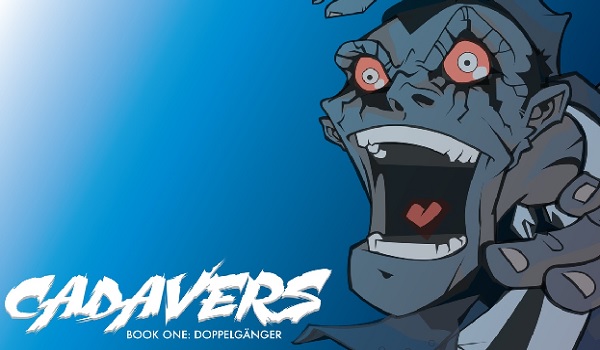 Ahoy-hoy there, friends! Today we will be taking a look at Matt Hardy‘s Cadavers Book One: Doppelgänger, a book that made our top ten list of greatest Kickstarter-funded comics of 2016! Published by Mad Robot Comics, Cadavers has recently returned to Kickstarter with an upcoming second installment, so we figured we’d take a stroll down memory lane and see what all the hullabaloo is about. For those of you who are unfamiliar with Cadavers, more data can be obtained by checking out our previous interview with the creators. Golly, that’s a lot of clickable internet links (scientific term), but enough frivolity! Let’s check out Cadavers Book One!

Welcome to Altrasania, a small country that has become ground zero for a transdimensional crossover event! Now, not all our readers are scientists so in order to better explain all the technical jargon above, we must first look to the back of this issue of Cadavers. There, we get a brief explanation for the appearance of what the media call “Spectrals”; displaced ghouls and ghosts (monsters too) forced to immigrate into another world in order to escaped the “Malady,” a movement that has brought war and suffering to their home dimension.

These “Spectrals,” or Cadavers as they call themselves, get a bad rap from the mass media machine and are forced into economic slavery. Ostracized by society, the Cadavers have no choice but to partake in organized crime and other dubious ventures in order to survive. The themes that are explored in Cadavers are heavy and relevant to virtually any era of human existence, which is just one of the strengths of this book. The creepy-yet-fun presentation of the story and humorous nature of some of the characters are an excellent contrast to these themes, and make Cadavers a truly unique reading experience. 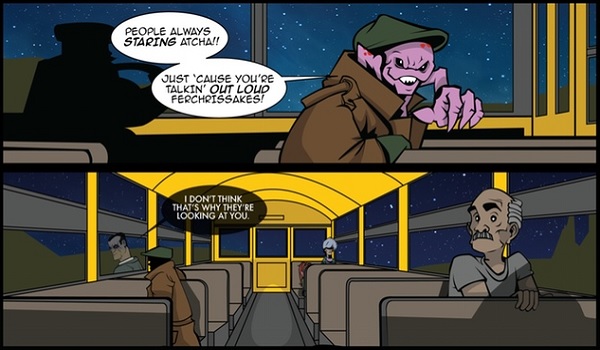 Speaking of characters, the cast of Cadavers is both eclectic and entertaining. There’s Bogeyman, the subject of constant terror for yours truly who also has the ability to switch between cat and humanoid form, Revenant, who “borrows” the flesh of the recently deceased for disguise, Anima, an ancient, chain-smoking and hard drinking “child” with a mysterious teddy bear, and Poltergeist, a tiny, trash-talking amateur dentist. Finally, we’ve got Doppelgänger who is the main attraction in this first issue, with the power to change his appearance and travel relatively undetected by manner of all types of reflective surfaces; think a crooked version of DC Comics’ Mirror Master.

Leading the smear campaign against the Cadavers is Marckus North, a media mogul who is running for First Minister of Altrasania. North’s policies include forcing all “Spectrals” to register to a watch list as well as securing the dimensional border at which our spooky friends enter Altrasania. Not surprisingly, North appears to have all sorts of ghosts in his closet (pun intended!), which we can all bet will be revealed in subsequent installments of Cadavers.

Doppelgänger and co., along with a host of other interdimensional refugees spend their down time at “Spectral friendly” bars, safe from the pitchfork hysteria of the mass media-addled populous. It is at one of these very speakeasies, “Isabel’s Haunt,” that the Cadavers hatch a plan to confront Marckus North and take him down, as it were. The scenes at Isabel’s work particularly well and showcase the different personalities of our “heroes” as they consume copious amounts of sweet, sweet beer while watching a perfectly lampooned version of real-world prime time news broadcasts. 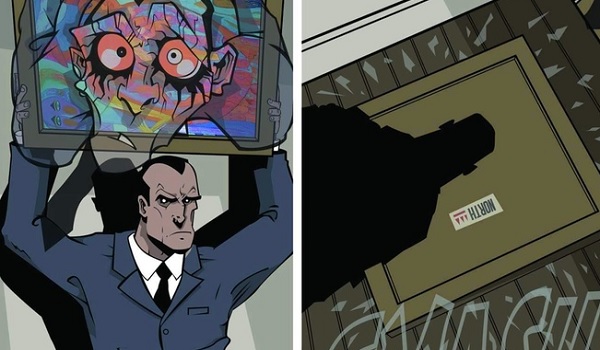 Of course since Marckus North is a dangerous and calculating son of a shoe the Cadavers’ plans are thwarted and the group is left in disarray by the end of book one, but many questions still remain. There appears to be a traitor in their midst, and we can only speculate as to what North’s true plans are; he seems to be able to easily overcome the Cadavers’ powers, which leads me to believe he is somehow linked to the Malady and the crossing over of the two dimensions. Just my guess (and a good one at that, right guys?).

Thankfully, book two promises to embellish a bit on the events that transpired at North’s mansion/compound/base (/house) from the perspective of my personal favorite character so far, Poltergeist. In fact, each new installment of the series will be told from another member of the Cadavers’ point of view, almost like some twisted version of Pulp Fiction, which should be a whole lot of fun.

The creative team behind Cadavers consists of writer Matt Hardy, artist Edward Bentley and letterer Rob Jones. Bentley’s artwork is consistently brilliant throughout, blending reason and abstraction from character to character and across the various locales featured in the book. Take for example a character like Anima, the 300 hundred year old kid of the bunch, who despite all her nasty, adult habits gives the appearance of a nice little girl, versus Poltergeist who looks like something that walked out of a Chuck Jones cartoon on acid (do not attempt). The visual aesthetic of Cadavers is as dynamic as the group themselves, and remains interesting from panel to panel. An image of the vertically challenged Poltergeist standing on his tippy toes on a bar stool is something that made me chuckle with each read through, and it’s small touches like this that really add a layer of depth to the story (plus I really like Poltergeist).

I can recommend Cadavers to just about anyone who is a fan of supernatural fiction, or even just independent comics in general. It does deal with some serious socioeconomic issues, but they aren’t obtrusive to the story and the book doesn’t take it self too seriously. All around it’s a great comic with a fun story, and just enough mystery to keep readers engaged. Bring on book two!

For more information about Cadavers and to purchase your own copy of book one visit Mad Robot Comics’ website, then take a spooky stroll on over to the Kickstarter campaign and show your support for the upcoming Cadavers Book Two: Poltergeist!

What did you think of Cadavers? Let us know in the comments section and on our Twitter page!