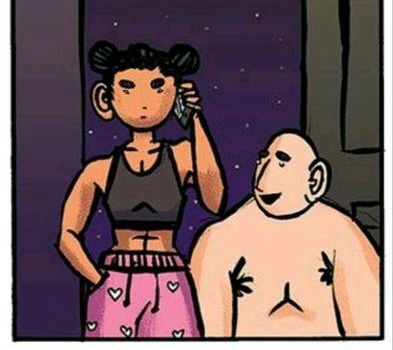 Who knew the world’s most feared and deadly assassin comes in a crop top and baggy pink pants. She does, and her name: Agent Sweetheart. In the debut issue of Mi Sweetheart, writer Sam Head and artist Rachel Nutkins attempt to blend the savage, sinister world of assassins with light-hearted humor. Mi Sweetheart proves to be a showcase of missed opportunities and splotchy artwork.

Mi Sweetheart begins at some ungodly hour, with four assassins traveling to their certain deaths. Their mission is to bring down Agent Mi Sweetheart. However, the more the assassins talk about Sweetheart’s lethality, they decide its best to abandon the mission and start their lives anew. Sweetheart eventually discovers the would-be assassins’s van. She does some phone sleuthing and as it turns out, her agency sent out a hit on her due to a miscommunication in her work schedule. Then, an actual assassin pops up. Sweetheart barely breaks a sweat during the brawl, and must find out who’s trying to kill her.

The premise of Mi Sweetheart is intriguing enough. Assassins are, by definition, cool, though very common in the comic-universe. As long as the story is inventive and isn’t just a carbon copy of what some thirteen year old on the playground would think up on a whim, then you’re in business. Mi Sweetheart fails to do just that. It brings nothing new to the table. There are glimmers of compelling content under the pile of bad jokes, choppy pacing and dull characters, however, these glimmers serve only to fill in the speech bubbles. For example, it’s only mentioned how Agent Sweetheart has a Russian man as a pet. It would have been infinitely more exciting to see how that transpired (and the comic science behind it) than what is shown.

Similarly, the artwork of Mi Sweetheart consists of a simple design that is not exactly visually appealing. Upon first glance, the artwork feels like a roundhouse kick to the eyes. The color scheme is all over the place, bouncing between light and dark settings on a single page. Even the brighter colors are dull and feel distracting rather than eye-catching. I personally cannot get over how large Sweetheart’s ears are. Considering the proportions of every other character, it’s bewildering how her ears are thicker than her muscular arms or larger than the two puffs on her head. However, in spite of its rough exterior, the artwork is fitting to the tone of the Mi Sweetheart. It’s just a shame that this is what story has to offer.

Ultimately, Mi Sweetheart is anything but a sweet treat. Mi Sweetheart is supposed to be a light-hearted take on a usually dark and blood-drenched topic. And it that regard, it did it’s job. But there is little about this story that makes it special or original.  The comic thinks it’s edgier than it actually is. Someone needs to put a hit out on Mi Sweetheart, and botch up the hit so it can reevaluate its life choices.