Home » NPC Tea #1 is a Fun, Fresh Take on the Fantasy Genre 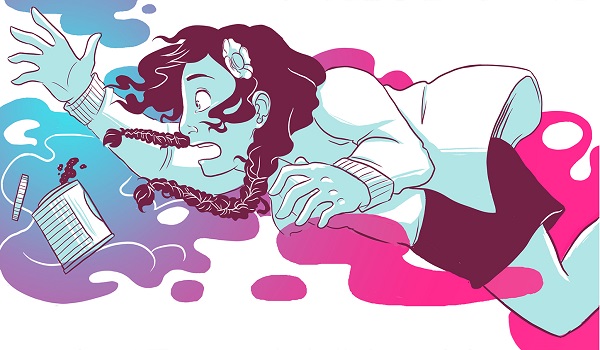 A lot of fantasy stories are centred on some giant war in a vaguely medieval European world featuring elves, magic, orcs, and what have you. NPC Tea by artist/author Sarah Millman is not one of those stories, however. Millman instead forgoes the tried-and-true formula in favor of a unique twist. The elves and magic and whatnot are still there, but the indie comic takes place in modern-day Cardiff.

The story in the first issue follows Hannah, student at the local magic school, and tea shop owners Bryn and Oz (with their silent friend Geraint), ending with a fateful run-in at the Y Ddraig tea shop. It opens with a quick run-down of the history of the world, with some additional lore thrown in for good measure, and follows Hannah on the first day of class and her conversations with her mysterious off-screen friend Luke. Meanwhile Oz and Bryn are having issues at the tea shop, mainly that he’s rude to customers and feels his art isn’t properly appreciated. It ends with Luke guiding Hannah there so the story can end on a crazy (and well executed) twist that has me chomping at the bit to read the next issue.

The story is off to a great start. My only real critique is that most of the lore lacks the proper context to give it real meaning. That being said, it’s the kind of attention grabbing part one that makes me want to know more about the world and what is going to happen to the characters involved. The book feels a lot like Saga had a baby with Dungeons & Dragons and decided to raise it in Wales. That is to say, pretty awesome if you like fantasy.

All the characters make a strong impression from the get go. Hannah is the girl who won’t just accept what she’s told, even if it costs her, and has some elements of a hacker-archetype thrown in for good measure. Oz plays the beleaguered and practical business owner to Bryn’s unappreciated auteur (think Herren and Wade from the Dragon Age series), and Geraint makes sure the reader knows how annoying he finds the whole thing without saying a word.

The art has a minimalistic style with a single colour scheme representing the opening exposition, Hannah’s scenes, and the tea shop, with the latter two palettes combining during the final portion of the issue. The opening sequence mimics medieval artworks (a la the Bayeux Tapestry), setting the tone and giving the present-day sections a chance to distinguish themselves stylistically. Millman also includes some hidden bits of story/humor in the background of some panels, notably a hint at the identity of the mentioned, but not expanded on, Nix and a bit on Hannah’s computer that had me laughing out loud. These little extras alone make a second read looking for them worthwhile, but also hidden-in-plain-sight details to the twist ending.

It all comes together for a fun, offbeat story that’s definitely worth a read. If you’re interested, go check it out at heartoftime.co.uk and click “shop” and check out artist/author Sarah Millman at the same website or follow her on Twitter @Heart_of_Time.

Have you read NPC Tea #1? Think I was right on the money or way off the mark? Think I’m a posh twit? Leave a comment below!