Home » Drax the Destroyer: Still Out For Revenge! 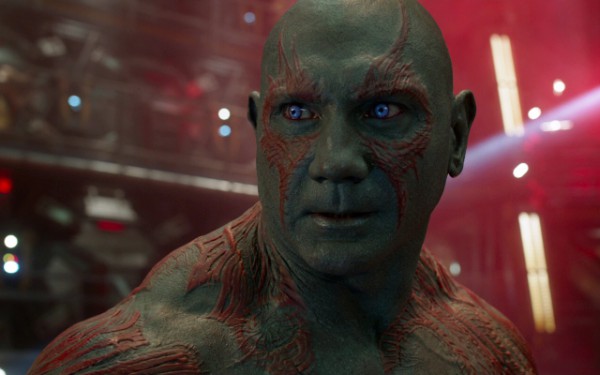 It is coming. Guardians of the Galaxy Vol. 2 is upon us just as we all wished it would. The MCU is continually expanding and with the news that the Avengers and the Guardians will be teaming up with Spider-Man, Doctor Strange and others to face Thanos in the Avengers: Infinity War. Out of all the Guardians, new and old, Drax is a character that it highly likeable. He is known as Drax the Destroyer, hell-bent on getting revenge on first Ronan the Accuser and now Thanos the Mad Titan, for the death of his wife and daughter. Drax was a gladiator warrior and a fearsome opponent. I expect that Drax will be hitting and killing lots of things in this movie.

However, with his inclusion in the Guardians, Drax in the sequel trailers seemed a little more laid back and not as intense. He’s still as tactless and oblivious to sarcasm as ever. He seemed to have closer relationships with the main Guardians. Rocket and Drax have an argumentative relationship that they seem to both like. Rocket does push people’s buttons the right way, after all.

I also can’t wait to see Drax’s interactions with Baby Groot, which from the scene after the credits in the first movie shown, it should be great. According to Marvel Studios and the director, Drax and Baby Groot seem to have some sort of rivalry as the ‘younger siblings of the Guardians family’ or something along those lines. I don’t see it yet, but Drax didn’t care much for interacting with fully grown Groot.

Drax seems more open to humor and more open to interactions with others. He has a great respect, I think, for Peter Quill/Star Lord. I think the problems between Gamora and Drax from the first movie won’t be there, but I can see Drax not getting along with Nebula.

Dave Bautista is reprising his role as the character and I can’t wait to see how he does it so well again.  Before the first Guardians movie came out in 2014, I was hesitant because there are so many WWE wrestlers turned actors that just aren’t that good (The Rock being the exception). But he was a great choice for Drax and I’m glad that Marvel Studios hired him.

One thing that I fear is that Drax will be pushed to the side in terms of character development. Star Lord is meeting his biological father and dealing with the Ravagers Schism. Also, Gamora and Nebula’s relationship is rocky at best. The fact is that Baby Groot and Rocket will steal the show again. Drax still has the sole purpose of his life as revenge. I hope that there is going to more for him to do in the second movie. The trailers don’t always show everything that’s going on, after all.

What do you think? Is Drax going to be sidelined? How’s he going to deal with the new members of the Guardians?  And how will his revenge-driven mentality continue to impede him as a character? Only in May will we find out.