Home » Gamora, a Most Dangerous Woman 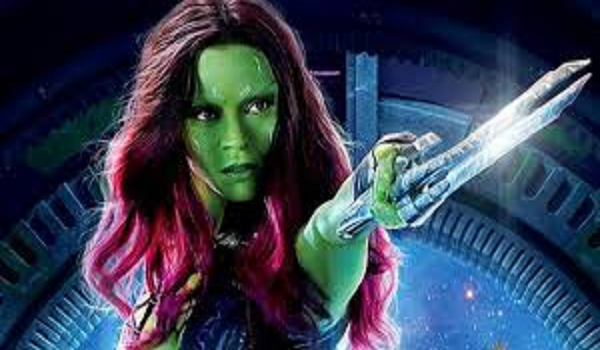 Guardians of the Galaxy Vol. 2 will be out in the beginning of May and with that, the return of Gamora, the adopted daughter of the Mad Titan Thanos, and the smartest and probably best fighter in the Guardians. Gamora didn’t get much of a character arc in the first movie, or rather, no conclusion. Gamora still worked for Thanos and Ronan and she’s done things that she’s not proud of. Therefore, her story is the story of redemption. It’s why she had the change of heart in the first movie. She realized the danger of the Infinity Stone in the hands of her ‘father’.

Her relationship with her sister Nebula was still bitter and tense. In this movie Nebula will be a part of the Guardians (somehow, I’m sure not sure how it happened but I can’t wait to see). Gamora and Nebula’s relationship will be featured in the movie, I expect insults thrown and them fighting or I will be disappointed greatly. The two ‘sisters’ fighting is always brutal and epic, because they know each other too well.  Nebula has a complex towards Gamora, who was the favorite of Thanos. Gamora has complicated feelings for Nebula, mostly wanting to get along with his sister and for Nebula to turn away from Thanos. Gamora does enjoy fighting her though.

My biggest fear with Gamora is that she’ll be regulated to the love interest of Star Lord, like a lot of female characters in superhero stories, which is very annoying. Not that I don’t like that couple, but Gamora is a character that can stand on their own. It’s just sometimes, when two characters get together, the writers don’t write the relationship believable or well enough.

If the pattern of the MCU movies are any indication, Star Lord and Gamora will be together by the end of the movie. That’s what I think, anyway. Star Lord obviously likes Gamora romantically, but Gamora’s feelings are less shown than his. I really don’t want her to be shoehorned into a love interest and the typical drama ensues when that happens. However, we’ve been extremely lucky with the Guardians’ movies, as the first one was an unexpected hit for Marvel Studios and the second one is the most anticipated superhero movie of the season. Hopefully, Gamora/Star Lord will be handled tactfully and not interfere with the major story-lines running through the MCU.

Gamora’s fight scenes will be as epic as the last movie.  She’s one of the better fighters in the MCU, with a range of abilities from hand-to-hand combat to piloting to arms. I mean, Thanos trained her and Thanos is the most dangerous mf-er in the MCU. Gamora with a big as hell gun in the trailer and knows how to use it. She’s just plain awesome!

What do you think about Gamora? Do you think that she and Star Lord will get together?  OR will they not?  How do you think Gamora and Nebula will deal with each other?  Sound off in the comments or send us your thoughts on Twitter!