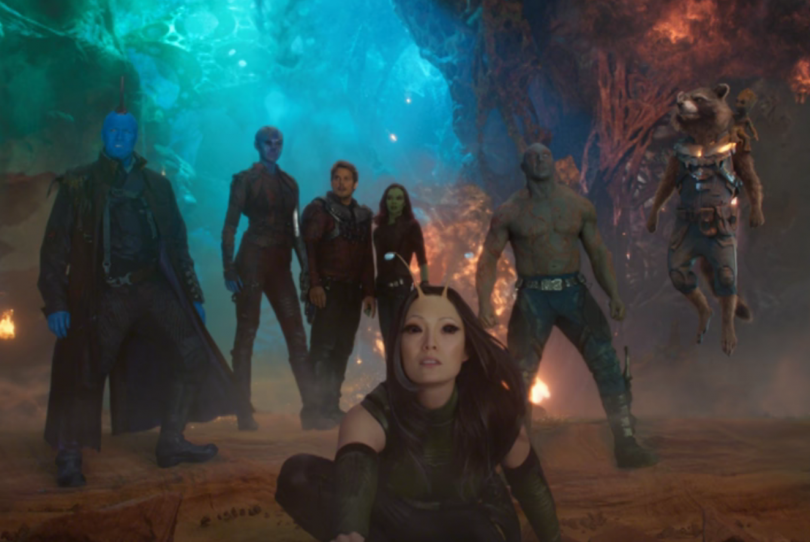 Amongst the huge cast of characters introduced in the Marvel Cinematic Universe, I don’t think any of the heroes aside from perhaps Iron Man, have been so well accepted as the Guardians of the Galaxy. The 2014 zany space opera opened a whole new branch of the Marvel universe, or rather galaxy, and became popular for its colourful characters, great sense of fun, and kick ass soundtrack that actually had a thematic place in the narrative. The sequel, Guardians of the Galaxy Vol. 2 takes place shortly after the first, offering a more personal story and utilising the same humour and thrills as before. However, the strange thing is that it lacks that same spark of imagination and excitement as the first.

Guardians of the Galaxy was definitely a risk on part of the film studio. The Phase One films proved the superhero shared universe formula worked with Avengers Assemble being the big pay-off, with four out of the five Phase Two films being sequels of the same formula. But Guardians was the big one, a weird space opera starring a tree and a gun-toting raccoon, full of obscure characters and an unexplored side of the comic book genre that hadn’t really been done before. And, surprise, surprise, it was a runaway hit, everyone loved it, and the titular Guardians are now adored.

The sequel doesn’t necessarily strive to top the 2014 film, naturally continuing the growing story of our beloved “bunch of a-holes” as they still juggle their varying personalities. The film’s major theme is that of family, which was kinda explored in the first film, though played second fiddle to the Guardians getting over their emotional baggage to save the galaxy. By the time we catch up with the Guardians, they are heroes-for-hire, fighting monstrous aliens while cracking jokes and acting like the most dysfunctional family in space since the cast of Red Dwarf. But while Drax (Dave Bautista) and the now baby Groot (Vin Diesel) have more-or-less moved on as best as they can, Peter Quill (Chris Pratt), Gamora (Zoe Saldana), and Rocket Raccoon (Bradley Cooper) still have a lot of issues.

Quill has since moved on from the guilt he carried for so long following his mother’s death as characterized via his new “Awesome Soundtrack”, but has to deal with Gamora remaining emotionally distant (via some weird jokes related to Cheers which I don’t get become I am uncultured), and Rocket’s increasing assholery and need to prove he is better than Quill. At the start of the film, the Guardians are hired by the gold-skinned Sovereign race to slay a giant tentacle monster in exchange for gaining custody of Gamora’s violent, cybernetic sister Nebula (Karen Gillan). However, Rocket steals some valuable batteries, causing the Sovereign to chase the Guardians, while our heroes are at each others throats.

However, they are rescued by Kurt Russell, playing the ambiguous role of Ego the Living Planet, who reveals that he is Quill’s mysterious father. Ego is accompanied by the empathic but socially inept Mantis (Pom Klementieff), who acts as his aide, and provides some laughs with Drax, and serves as a new heart to the team while Groot is elsewhere. Speaking of which, the Guardians split up, Quill, Gamora, and Drax going with Ego and Mantis to experience some father-son bonding, while the others are taken captive by the Ravagers.

Yondu (Michael Rooker), leader of the Ravagers crew and Quill’s father figure, is exiled from the organization for breaking their sacred code by performing really bad things, which remain a little vague until later on in the film. Yondu’s own crew then turn against him, led by the hilariously named Taserface (Chris Sullivan). Nebula, meanwhile, is allowed to leave to go on her vendetta against Gamora, leading to being a lot more fleshed out, and adding to the reasons behind the tense relationship between Thanos’ former prodigies.

Now with a larger cast, James Gunn manages to juggle them well and gives mostly everyone something to do. Quill has his relationship with his father to explore and a potential future after spending his life as a lovable rogue, Gamora rejects any attempt at interpersonal relationships but has no problem trying to obliterate Nebula, the weird relationship Rocket and Yondu form take wings, Groot provides a lot of innocent humour. But, Drax and Mantis don’t really have much to do. Drax is still the funniest character in the film, and attempts to teach Mantis how to socially interact with others in his own literal-minded way. However, Mantis is quite the likeable character, using her abilities to express the hidden inner feelings of the Guardians by touching them. Heck, Yondu’s lieutenant Kraglin (Sean Gunn) even gets a large role in the film.

Kurt Russell makes for a compelling Ego, mixing a genuine sense of humanity but godlike arrogance to him as well. Everything he does and says clearly expands from his very name, and despite the obviousness that he is the villain of the film, his crimes are pretty shocking when they come to light. On the other hand, the Sovereign aren’t all that interesting, coming off as a little boring, though I did get some chuckles out of their arcade-style way of piloting their spacecraft.

The humour remains fast, snappy, and hilarious, the biggest laughs coming from Drax, and Groot, who brought the biggest laughs during his attempts to retrieve Yondu’s arrow-controlling fin. I will admit I didn’t laugh quite as much as I did with the first film, but I feel in some places, the film was trying to remind us a little too much of how enjoyable the first one was.

The titles are handled by focusing on little Groot dancing to “Mr. Blue Sky”, put stretches out a little, obviously acting as a pay off for Groot dancing at the end of the first film. The songs don’t really have as much emotional weight or connection to the story, though I may have view the film again to clarify that. There is also a scene where Ego deliberately sings the lyrics of one of the songs to Quill as if to drive home the meaning of the words to the audience. It felt a little self-indulging.

And in-between all of the fun, laughs, and the great heartwarming moments, there are a lot of cameos, including a significant Stan Lee cameo whose presence answers a very popular fan theory. Seriously, it made my jaw drop. I thought it was just a joke. Be sure to stick around for the entirety of the end credits, as the film has a record breaking five post-credit scenes, hinting at a couple of things to come, and believe me, the prospects are very exciting.

All in all, Guardians of the Galaxy Vol. 2 is a welcome addition to the MCU. Not as memorable as the first film, but still has plenty to offer, at times having a heavier story and plenty of wacky shenanigans from our favourite space-faring douchebags. We’ll be seeing them again real soon in Avengers: Infinity War, and a promised found outing whenever Phase Four rolls around.

Have you seen Guardians of the Galaxy Vol. 2, and what were your thoughts on it? Leave a message below or on our Twitter feed.