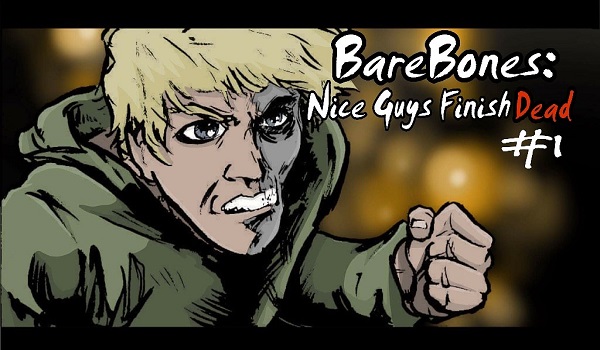 Depending on which part of the world you are living in Spring has sprung, and what better way to celebrate new beginnings than with sweet, sweet revenge? That’s right friends, Bryan Swann‘s BareBones: Nice Guys Finish Dead is now on Kickstarter and we recently had the chance to catch up with him about the project. So before you go and click that handy link in the previous sentence to get your own copy of the book, why don’t you take a look at our handy “interview” below? Well, what are we waiting for? Let’s see what Bryan had to say!

AP2HYC: Tell us a bit about yourself.

Swann: Well, my name is Bryan Swann and I am the writer and creator behind BareBones: Nice Guys Finish Dead. Aside from this I run an entertainment site, BareBones Ent., where I interview bands, do reviews and features, and also work with people in various entertainment fields.

AP2HYC: What was the inspiration behind BareBones: Nice Guys Finish Dead?

Swann: This all started with me wanting to create a cool little mascot for my website, and then turned into I should create an origin story for the mascot, which from there it really developed into something much more epic. Two major scenes came to me in my head, which became the climax and then the final two pages of the story. Everything else developed around that.

AP2HYC: Can you give us a little background on the characters?

Swann: For sure. Edwin is a relatable guy, I feel. He has a craving to fit in and make some friends, while he can sometimes also be oblivious to how people treat him. He’s a bit of a pushover. Blair is Edwin’s girlfriend, but she isn’t seen too much in the first book. Jet is the lead singer of the band that Edwin works for. He is your stereotypical conceited, kind of hothead front-man. Finally Bryton is our lead bad guy in the story. He fits into your frat boy-jock stereotype. He is loud, enjoys the party life, and is a sexist and a bully.

AP2HYC: Would you consider Edwin to be something of an anti-hero?

Swann: I would say that is where he best fits in, especially as we progress.

AP2HYC: The problem of having power is interesting and complex. How would you use yours?

Swann: Man, I would love to say that I’m completely for the greater good and a golden boy if given powers. I don’t honestly think that is realistic though. I think I would help some people, but I also think I’d most likely be giving out some payback too. I just think being a bit more in-between, even “villain leaning” is more realistic.

AP2HYC: How did you and Joseph Arnold get together for this project?

Swann: We met up on Reddit. I was looking for someone to do some character designs for me, and he had messaged me about it. I took a look at his work and sent him over the character information. I was really sold on some work he had up on the Power Rangers that was phenomenal. What he sent back was awesome and fit into the character aspects I didn’t even describe, but had been in my head. After that there was no question I needed him to do this project, and luckily he liked my twisted little tale.

AP2HYC: Explain the collaborative process between Joseph and yourself.

Swann: Well, I come up with some outrageous idea and he works his genius to make it happen. I think we have pretty good communication on the project. We’ll spitball some ideas on promo prints, and it we want to make any tweaks or additions to pages that weren’t originally written down.

AP2HYC: What are some of the rewards you offer for those who pledge to the Kickstarter campaign?

Swann: We have an option as low as $5.00 (USD) to just get the book. We’re offering a bunch of various digital goodies for $10.00 and $25.00. You can get original pages and corresponding script, laughable art commissions by myself, good art commissions by Joseph, a part in the upcoming mini-comic, etc. I think we have some good stuff in there.

AP2HYC: What’s in store for BareBones in the future?

Swann: Oh, he is on a journey for sure. I would say he is pretty lost and confused ending the first book. The upcoming mini-comic ties up some loose ends and leads directly into the next ones. Every book definitely ends with a cliffhanger.

AP2HYC: What are some of your favorite comics and movies?

Swann: For comics, the Polarity series by Max Bemis on Boom!, Nightwing (New 52), the various Batman series of the New 52, The Killing Joke, the Power Ranger series on Boom!. There’s really a lot. For movies, Nightmare Before Christmas, Dr. Horrible, Darkman, Batman movies, Star Wars, Captain America: Winter Soldier and Civil War. I watch a ton of movies, so this list could on forever.

To get your own copy of BareBones: Nice Guys Finish Dead head on over to the Kickstarter campaign and pledge today! Let us know what you make of the comic in the comments section below or send us a Tweet!