Home » Comichaus #1 is a Bizarre Jumble of Gruesome, Deadly Fun 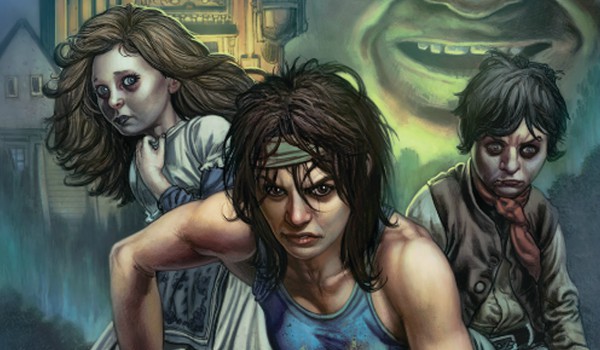 Readers of indie comic books aren’t being left hungry when it comes to anthologies. 100% Biodegradable, Papercuts & Inkstains, Sliced Quarterly, Meanwhile… and Extraverse all continue to draw in readers with sustained success. Comichaus however boasts a slightly different story. Comichaus is more than just an anthology – it’s the flagship title behind a somewhat recent online marketplace for independent comics. It’s also currently crowdfunding to create an app version of the site, essentially becoming a Netflix-esque hub for indie comics. As you may have guessed, the ambition is red-hot with this one.

Where then does this self-titled anthology fit into the rapidly expanding Comichaus world? Is this anthology a fresh, exciting voice for new and established creators? Or is it a flash of decadence in a market that’s at risk of drowning in the already thick, briny sea of indie anthologies?

Fortunately, Comichaus‘ debut issue doesn’t feel like a cash-in on the indie anthology world at all, mainly because it bears a loose, scrambling nature to it, as if it’s on a mission to find a solid voice that’s all its own. It’s a comic that’s certainly not content with being yet another title for indie comic readers to buy. It wants to be something different, even if in these early stages, it’s not entirely sure what that something is.

Within this anthology lies seven strips who’s quality ranges from haphazardly executed to instant classics. The first story, “Karen Shayde”, written by James Mculloch and illustrated by Jessica L. Byrne, is one that straddles between the two levels of quality. Testy, cuss-filled P.I. Karen breaking down outside a mansion in which some kind of grotesque sacrifice is occurring doesn’t feel like the most seamless of concepts at first, but it’s worth noting that this is only issue 1, and all of the stories here, aside from “Mum and Dad”, are clear-cut in their mission to set up their concepts and characters.

Jon Laight and Dan Butcher‘s “Suited and Booted” is an example of that feeling of setting things up working against its creators. The story presented to us is stuffed with world-building about the Earth colonising Mars, aliens eventually conquering humanity, etc. It’s a story we’ve seen in many variations before, but “Suited and Booted” is so exposition-laden that it makes the comic hard to enjoy. Huge panels of text smother the artwork, making it minuscule to see just what the hell is going on. Nevertheless, the strip ends on a high, establishing our heroine and our villain, which opens the doors for future issues to crank the inevitable action up to eleven.

Elsewhere, “Feathers” and “Troubleshooters” show how damn intriguing Comichaus can get. Like “Suited and Booted”, “Feathers” gives us a tale we’ve seen in other forms before – an epidemic of bird flu spreads like wildfire across the globe, with the disease soon coming into contact with a down-to-earth, suburban family, who’s man of the house seems oddly disconnected from his wife and son. That disconnection comes to a head when the disease starts to produce a mutative effect on its victims. In these six short pages, writer Dave Cook and artist Norrie Millar perfect the concept of setting their story up whilst maintaining the mystery and intrigue that invites readers back for more. Little is given away but much is hinted at.

Aaron Walther‘s and Ed Bickford‘s “Troubleshooters” is less subtle, but far more fun. Two riders approach the post-apocalyptic drenched town of New Port, but are stopped by guards purporting to defend the city from dangerous outsiders. Rooted in this one locale of right outside the city, the whole plot pews forth and is a delightful homage of cowboy bravado. Oh and get this, these riders aren’t riding horses – they’re riding dragons. That’s all I need to tell you about “Troubleshooters” for now, because that’s all you should need to be sold on this handsome moulding of westerns, post-apocalyptic and fantasy fiction. Luke Cooper‘s “Mortality” bears the same low-key approach as “Troubleshooters”, but it’s arguably less compelling. Minimal characters and minimal settings don’t exactly scream instant hit, but the story of a father and daughter separated at death and embarking on individual journeys in the afterlife is a story I want to read more of.

The final story, “Mum and Dad”, by Tom Ward, Iain Laurie and Colin Bell, a tale of how a little human boy is perplexed as to why he looks so different from his alien parents, is perhaps the definitive comic in this anthology. A slice of grotesque parody, it has no pretension of being anything other than a surface-level ditty that tears apart expectations of the reader. Once you’ve read the strip, you’ll see how such descriptions are bad-taste puns! That’s not to say the other strips here are stuck up their own arses. In the space of six pages for each strip, they don’t really have the time to be pretentious, but instead “Mum and Dad” emphasises how its own succinct nature is perhaps the best way to create the most engaging comic strips featured here.

Comichaus‘ debut issue is a fiery if perplexing portrait of routine dark themes that have sharp bursts of life injected into them here and there. Death, horror, disease, apocalypse, invasions and the afterlife all play vital roles in giving the comic some form of identity, unified still further by the strips being in black-and-white. The lack of colour doesn’t work wonders for every strip here, but for a comic that hasn’t immediately found its voice, Comichaus entices you to tumble further down into the mad, twisted rabbit hole it opens up beneath your feet. I’m keen as hell to see what future adventures “Troubleshooters”, “Feather” and “Mortality” have in store, whilst “Karen Shayde” and “Suited and Booted” both hint at growing into more substantial and rewarding affairs than their initial lacklustre appearances here might suggest.

Comichaus looks set to offer a darker form of entertainment than other anthologies on the indie comics scene that’s coupled with stories, characters and artwork that will hopefully grow in strength as we discover more issues.

You can buy your first issue of Comichaus from the Comichaus website here, as well as checking out a wide range of fantastic indie titles available from the online market! Don’t forget also to check out the Comichaus app on Kickstarter too and pledge your support!