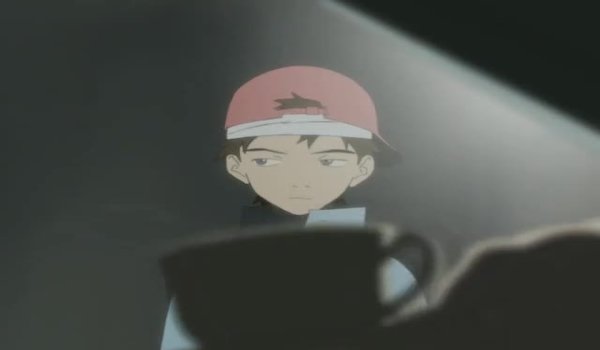 It is at the halfway mark of the anime FLCL where things start to become a little more complex and weirder than it already was. While the first three episodes meandered through wacky shenanigans, character growth, and easy-to-understand metaphors after watching the episodes five billion times, episode four realised it had quite the plot to unravel and started doing so. The episode feels the weakest of the six-part anime, with awkward pacing, a weird plot, and not-so-subtle use of Haruko telling Naota to “swing the bat” into order to advance his own maturity by making an adult choice. Oh, and the episode focuses quite a lot on baseball.

Speaking of which, the episode actually opens with a baseball game. Haruko is on the winning side against the team coached by Naota’s grandpa. Naota himself appears to have been forced into the game and is getting his ass kicked by Haruko both when on the field and when at the bat. But he’s not exactly helping himself since he never actually swings the bat, and is being used as a stand-in for his talented brother, and Naota knows it. This also applies to his unhealthy relationship with Mamimi, but Naota seems to enjoy that to an extent.

Grandpa’s team discover Canti the robot is a skilled catcher and recruit him into the game, letting Naota go. Haruko teases him, and Naota reacts in anticipation of another horn fondling (*ahem*), but Haruko instead walks off. Naota’s unsatisfied reaction implies he is now used to Haruko’s antics, and in fact, both desires and likes them. His romantic feelings are shifting from Mamimi to Haruko. Haruko leaves on her moped, telling Naota that he won’t be able to do anything until he swings the bat – something which she will not shut up about in the episode.

Naota returns home, finding the very uncomfortable sight of his father Kamon giving Haruko a rather sexualised massage using his facial hair. Things get even weirder when the pair start making out using fried eggs (WTF!?). Naota gets uncomfortable, as do I, and he storms outside. Outside, he runs into newcomer Commander Amarao, a bloke with really big fake eyebrows, and is kind of like an older version of Naota. Noticing super spicy bread in the family bakery, Amarao makes it clear he knows Haruko and warns Naota not to get too attached to her, for Haruko will use and abandon him. During this scene, you can hear Haruko and Kamon doing…things. Possibly exploring the fridge for other food they can do erotic things with that would turn Heston Blumenthal on.

Naota hangs out with Mamimi again, admitting his frustrations to her as best as he can, since he obviously has an attraction to Not-Ramona Flowers and is currently making out with his brother’s ex. He goes home, finding Haruko waiting for him. She sort of apologises for her behaviour earlier by teaching Naota how to perfectly swing the baseball bat, advising that he aims for the stars when taking a pitch, pointing directly at a bright, twinkling one in the sky.

This star turns out to be a satellite that Haruko knocked out of orbit with one of her home runs. It is being monitored by a government agency known as the Department of Interstellar Immigration, where Amarao works. It turns out the satellite is apparently evil and on a pre-programmed attack on Earth, likely meaning it is a creation of Medical Mechanica. We also meet Amarao’s subordinate, Lieutenant Kitsurubami, who is disturbed by his giant eyebrows. Meanwhile, Naota is awakened from his sleep by hearing strange noises coming from Kamon’s room. He tiptoes to the door, hearing every indication that his dad and Haruko are having sex. It is enough to shock him into a headache, but rather than a robot jumping out of his head, a bright, red, flashing light like some sort of beacon.

The next day, Naota bums around with Mamimi whilst moping and she spouts her usual nonsense. Haruko shows up, informing them that Canti is playing baseball, Mamimi ditching Naota in favour of watching her other stand-in for Tasuku. Naota gets fed up and goes home, finding his dad acting and speaking a little bit weirder than usual. Kamon starts speaking like a malfunctioning robot, spouting out sexual innuendo while accompanied by weird imagery of Haruko sprouting mouse ears and getting beat up by a giant version of Naota’s pet cat.

Frankly, I don’t really know what this is meant to symbolise but I can take a wild guess and say it is implying Naota’s envy towards the relationship his dad has developed with Haruko. It may also refer to Haruko playing around with Naota’s life for her own ends. Naota gets mad with Kamon and smashes the TV, causing Kamon to seemingly drop down dead. Elsewhere, Haruko is wowing the crowd at the baseball game, but it is disrupted when an emergency blimp flies overhead warning of the satellite’s approach, actually being drawn towards Naota’s signal beacon. Haruko seems amused by this.

After a chat with Amarao, Naota discovers his father’s body has an electrical plug coming out of it. He follows it to a closet where he finds his actual dad, alive but severely dehydrated. Naota frantically drags Kamon to the bathroom to revive him with hot water, while we cut back and forth to Mamimi screaming out more nonsense related to the prophet Nostradamus. Kamon explains to Naota that Haruko tried to “use his head”, and was nearly replaced with a robot when whatever Haruko tried to do didn’t quite work. We briefly return to the chat with Amarao, who explains how the whole N.O. channel thing works, and asks Naota to pass a message on to Haruko – to basically stop the satellite.

Haruko crashes into the Nandaba house like she is Segata Sanshiro, running over the Kamon robot, and invokes Naota’s wrath. He demands to know who she really is, but she responds with the hilarious yet appropriate line of, “I’m an illusion of your youth, a manifestation of the feelings in your adolescent heart!” Haruko is pretty much fits the “manic pixie dream girl” trope, though in Naota’s case, it is something he subconsciously wanted, since he rejects Haruko’s antics. Naota passes on Amarao’s message, and she reluctantly agrees to do it. According to Amarao, Haruko is completely a-okay with Mabase being nuked, since it is all part of her bigger plan.

Naota and Haruko speed to the roof of the Medical Mechanica factory as the satellite makes its flashy entrance, heading straight for Naota. Haruko shoves a shower cap onto Naota’s head and yanks out a glowing red Gibson Flying V guitar from his brain, much to the arousal of Amarao’s subordinates judging by their epic nosebleeds, while Amarao seems rather angered by the size of the guitar. The satellite heads for Naota, now conveniently resembling a giant baseball. Naota looks to Haruko for help only to discover she has legged it on her Vespa, believing he won’t swing the bat.

Just when all hope is lost, Naota calls upon his brother for strength (emphasized by Canti’s power), and swings the bat, stopping the satellite in its tracks. It then starts glowing, ready to detonate, only for Haruko to fly in and smash the ball with her own guitar, sending it flying away into the depths of space. However, while everyone is elated that Mabase is saved, one sour face is Mamimi, who realises that Naota is no longer as helpless and indifferent as he want. Something which will have a major impact in the next episode.

Despite the flaws of the episode, it is very important to Naota’s character development. The swinging the bat metaphor describes the whole message of FLCL – if you don’t take chances and risks in life, then nothing will happen. Naota struggles with this concept, since, despite acting mature, he has no adult ambitions in his life, and doesn’t wish to be a baseball player like his brother.

As stated in other reviews, Haruko represents Naota’s puberty, encouraging him to take a chance in life, which just so happens to be represented by the satellite hurtling towards him. He has to make a choice or face oblivion, aka, a life where nothing happens.

What are your thoughts on this episode and Naota’s journey? Leave a comment below or on our Twitter feed.