Home » Hooked On A Feeling: The Meaning of Star Lord’s Mixtape 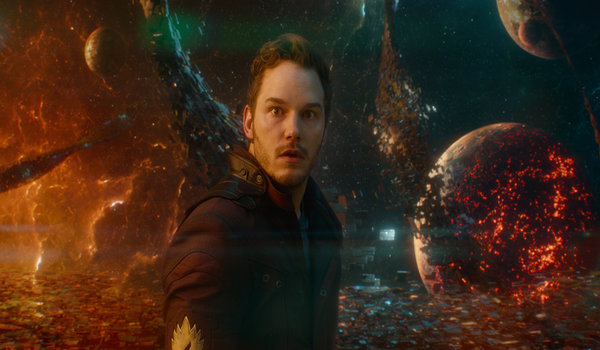 Guardians of the Galaxy remains one of the most popular of the MCU movies, primarily through its great characters and zany space opera antics. Plus, there was also the awesome soundtrack consisting of classics from the 70s and 80s. However, the nostalgic soundtrack does have a more deeper meaning then some may realise. It ties in with the character and story arc of Peter Quill (aka Star Lord), far away from home and still dealing with the death of his mother, and the guilt he carries for ending his relationship with her on a sour note.

Each song was carefully chosen by James Gunn to contribute to the tone of the film, something which Suicide Squad tried to copy but instead threw in songs because they were jokingly but thinly related to the characters. So, let’s put on our headphones and hit the play button as we take a closer look at each song on Peter’s mixtape and see how they relate to the progress of the film’s story.

The first is “I’m Not In Love” by Eric Stewart and Graham Gouldman, played in the opening moments of the film, where a young Peter has closed himself off from his cancer-ridden mother, unable to accept her inevitable death and having to say goodbye. In fact, he has closed himself off from everybody on an emotional level, as seen when he is sitting alone in the hospital listening to his headphones. He has thrown his love for others away.

Interestingly, this reflects the creation of the song, with Eric Stewart abandoning it. However, it was eventually revived when members of the band wouldn’t stop singing the melody. And like the song never leaving the band of 10cc, Peter never truly lost his love, instead merely rejecting and hiding it. The original idea for the song was that Stewart was worried telling his wife he loved her every day would become an empty phrase. This reflects Peter losing his love, limiting it to one night stands and the like.

This takes us to the next segment where Peter, now an adult, has become a lovable rogue, quite charismatic, reckless, and a complete Casanova, hitting on every hot woman he sees. A bit of a horndog, as the song “Come and Get Your Love” by Redbone. Both this song and “Go All the Way” by the Raspberries both symbolise Peter’s raunchy, Han Solo-esque life, though the latter also links to Peter’s recklessness and how far he is willing to go to get things done. But despite living for the moment, Peter’s life still revolves around the past, since he continuously plays his mixtape and his ship is decorated with memorabilia from his past life, and he often drops pop culture references from his childhood.

Peter meets Gamora, Rocket, and Groot, and all are arrested and taken to the Kyln prison. The film’s signature tune, “Hooked On A Feeling”, plays during the segment where the Guardians are put in custody. Peter gets mad when he catches a prison guard listening to his mixtape, angrily declaring that Blue Swede song “belongs to [him]”, hinting at how the tape was created for him by his mother and is one of her last remaining connections to her. The lyrics of the song mostly appear to link to the Guardians’ lives as a bunch of a-holes and are now being punished for it via their imprisonment, particularly Gamora for her crimes as Thanos’ minion. Drax is also in prison, definitely hooked on the feeling of revenge.

Anyway, the Guardians bust out of jail, Peter going to retrieve his mixtape from the guard, accompanied by “The Pina Colada Song”. The song itself tells the story of a man, unhappy with his marriage, who makes contact with a woman via a personal ad, through which they discover they have a lot of similar hobbies. It turns out the lady is his wife, renewing their dead marriage. Though that isn’t explicitly connected to Guardians of the Galaxy, it can be translated to it. The Guardians all team up to escape prison and sell off the Orb, finding that they have something in common, beginning the development of their friendships.

The late David Bowie’s “Moonage Daydream” was added in during post-production, but fits in quite nicely, being one of the most notable sci-fi inspired songs. It tells about an alien hero who is destined to save the world from a disaster. Now who does that sound like? No, not Superman! The song is also quite trippy and imaginative, which is a perfect fit when the Guardians visit Nowhere, the colony where the Collector lives.

In a pivotal scene between Peter and Gamora, the two form a connection. Gamora brings up the importance of his mixtape and cassette player, and Peter comes close to opening up about his mother’s death. However, he quickly resorts to his charismatic bad boy self, using the legend of Kevin Bacon in an attempt to impress Gamora. He lets her listen to his music, which happens to be “Fooled Around and Fell in Love” by Elvin Bishop. The song fits nicely with the scene and Peter’s arc, choosing to fool around and flirt rather than openly express himself honestly, something which Gamora is unwillingly to co-operate with.

The film moves on a bit before we get our next music track, but a lot of important things happen like the introduction of the Infinity Stones, etc. Ronan the Accuser shows up, everyone fights, and Gamora is blasted into space by Nebula. Peter risks his life to save her, not attempting to play the hero, but rather make amends for being unwilling to help ease his mother’s pain. However, as soon as Peter and Gamora are rescued by Yondu, Peter puts up his façade again, much to Gamora’s irritation. Meanwhile, Drax learns the hard way they mindless revenge is not the answer, Rocket chewing him out for nearly getting them all killed on his blind pursuit to avenge his family.

The Guardians reunite after Ronan obtains the Orb, teaming up with Yondu to save Xandar. Peter argues with Yondu about his kidnapping, briefly mentioning how he was separated from his family, though Peter disassociated himself from them as a child. There is still some love for them. His desire to make amends surfaces when he inspires his friends to “give a shit” and save the galaxy from Ronan, unwilling to let innocent people die. The power of the Infinity Stone would destroy Xandar, like a fast-moving cancer, in comparison to the slow and painful kind that destroyed Peter’s mother.

We finally get “Cherry Bomb” by The Runaways, which mostly serves as a catchy song for a montage. Not much to say on this one, though it could be seen as a representative for the Guardians rising up to the challenge as heroes against a galaxy that distrusts them. The fight against Ronan occurs, leading to the hilarious dance off where Peter singing “O-o-h Child” by Five Stairsteps. The song is used as a distraction, but instils a sense of hope, as the lyrics of the song indicate.

Peter grabs the Infinity Stone and looks to be destroyed by its power, but Gamora screams at him to take her hand. He views her as his mother, and this time, he is willing to take it out of love. He does not reject the newfound bonds he has made, and it is the power of friendship that allows the Guardians of the Galaxy to defeat Ronan and save the day. Peter also learns that his father is a more ancient entity, later revealed to be Ego the Living Planet in Guardians of the Galaxy: Vol 2.

As the film comes to an end, Peter finally opens up the present his mother left for him, discovering an encouraging letter, and a new mixtape. The first song his plays is “Ain’t No Mountain High Enough” by Marvin Gaye and Tammi Terrell, mirroring the words that Peter’s mother leaves him – she will always be with him, just as the song’s lyrics describe. No matter how far he goes, the memory of his mother will always be with him, and anything can be overcome as long as there are others to help, which Peter has in the form of his friends.

And so, our story comes to an end. There are actually two more songs on the soundtrack, “Spirit in the Sky” by Norman Greenbaum, though it was only featured in the film’s trailers; and the Jackson 5 ‘s “I Want You Back”, which is mostly there to show off Baby Groot dancing, but it also symbolises Peter accepting his mother back into his life along with the feeling of genuine love. The music played throughout the film shadows Peter’s emotional turmoil, carrying guilt for not coping with his mother’s death and rejecting her love, and his eventual acceptance of what happened. A lot of early articles reviewing Guardians of the Galaxy accused James Gunn of being unable to create an emotional connection and focusing on the humour. If you look and listen closely to the film, you’ll find that he did a magnificent job of conveying Peter’s inner journey throughout the movie through the music and a great performance by Chris Pratt.

Vol. 2 attempted to continue the use of music in helping with the narration, though I felt it was a little on the nose the second time around, with certain scenes trying to deliberately point out the deeper meanings of the music’s connection to the plot. I may write a follow up to this article with the second one.

Do you think the music helps with the film’s storytelling? Should other films take up a similar style? Leave a comment below or on our Twitter feed.