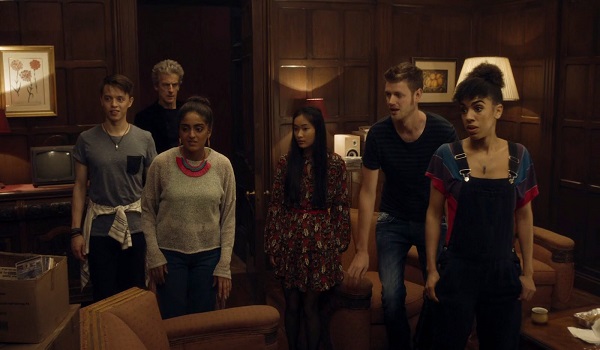 Things become a little bit more grounded within “Knock Knock” as we move away from the science-fiction elements (which featured heavily within the previous two episodes, “Smile” and “Thin Ice”) in order to follow Bill’s life (once more) on Earth. What I liked about this was the concentration on everyday student life, particularly the desperate struggle of finding rented accommodation. It clearly showed me that Steven Moffat and the team were more serious about creating a more organic companion, especially in the relatable department, and not just another blind, Doctor-wannabe that’s best served only to progress the ongoing narrative (like a plot-device) rather than actually properly contribute and develop a connection with the audience.

This leads to Bill (and her six friends) to stumble upon The Landlord (played by David Suchet), a shady looking old guy who just so happens to offer them a giant house for cheap rent. Suspicious much? The slight downside of “Knock Knock” is Bill’s lack of common sense (though the narrative tries to get around this by Bill desperately trying to separate her two lives, thus having some normality away from The Twelfth Doctor and his cosmic world), making you wonder why she doesn’t see the clear alarm bells ringing.

It’s fair to say that her friends do feel rather generic as characters, filling in the usual stereotypes, but they’re not the worst characters out there and serve their roles well in order to make the narrative more engaging, and allow it to move forward. Yes, some of them are clearly there to be fodder but it doesn’t dismiss them as being likable characters. After all, their small contribution to the plot did make me feel attached to them, and not want them to meet a horrible fate. Plus, it was quite amusing to see one of the guys (Paul) constantly trying to win Bill over only to be shot down in flames when she reveals she’s a lesbian. Burn!

“Knock Knock” finds some room for comedy by having The Twelfth Doctor constantly trying to interfere with Bill’s move to the house as he begins to suspect something is wrong. Of course Bill doesn’t want to believe anything is wrong and just wants her tutor to give her some privacy, which he doesn’t take a hint (at all). The episode then takes a rather Horror route (accompanied with the clichéd lightning storm appearing outside the creepy house) as the building almost comes to life, working against the characters in order to lure them into the deadly trap set up by (you guessed it) The Landlord.

The narrative becomes rather dark, and deep, as the revelations slowly get revealed. The students are taken one by one by the house as The Twelfth Doctor discovers the walls are filled with alien lice (he dubs Dryads) and have been eating youngsters every twenty years since the 1950s, all lured in by The Landlord. But the question is why? The truth is really disturbing, adding in a neat little twist in an attempt to make the villain feel more human, like his purpose actually has meaning and value. But, honestly, what I like about this reveal is that it doesn’t make a difference to The Landlord’s character. In fact, it just makes him appear even more psychotic.

We learn that he’s guarding his mother in the houses secret tower, though he originally lied to her in order to conceal the truth, telling her she was his daughter, and thus manipulating her memory so that he could continue killing innocent youngsters to preserve her (after she became ill when he was just a child). This desperate mission drives him to insanity, resulting in him unable to see the error of his ways, or that he has become something that his mother is ashamed of, made worse by the fact that he’s doing it all for her.

Naturally, upon seeing the truth, his mother ends her son’s twisted ritual and has the Dryads turn on them, resulting in Bill’s friends being freed from the walls, and everyone escapes the house before it crumbles (with The Twelfth Doctor joking that they’ll need to now find somewhere else to live).

Though the ending might seem a bit of a cope-out “Knock Knock” is overall an enjoyable experience and a great continuation of Bill’s journey. She’s quickly turning into a fun, and interesting, character that I enjoy watching each and every week. Honestly, I hope the rumours of her only being around for one series isn’t true because it would be a massive shame to see her go so soon (especially since we’re already losing The Twelfth Doctor at the end of the year).