Home » Mandy the Monster Hunter: The Mandy Book of Monsters Bursts with Both Heart and Action 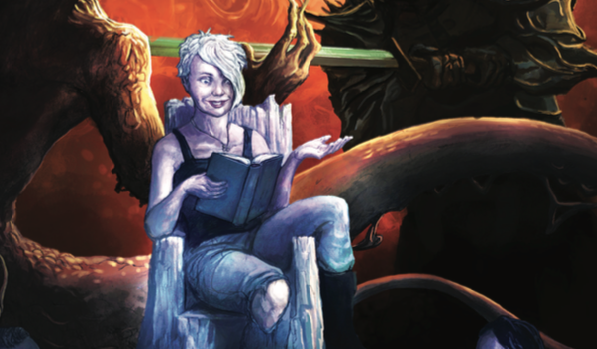 Matt Warner’s The Mandy Book of Monsters tells the story of Mandy the Monster Hunter, a katana wielding suicide blonde turned Mary Poppins. As “a legend of the playground,” she protects children from supernatural evil: parent-eating houses, trolls, werewolves. Through the varying artistic styles of its illustrators, its fast-paced narrative voice and non-linear plot, the British graphic novella throws readers into a world of monsters and men. Chapter by chapter, Warner and his artistic and editorial teams at Hellbound Media succeed in building an energetic albeit at times overzealous narrative.

The stunning artwork sets the tone for each chapter. The story doubles as both a comic and a piece of experimental art. Almost every panel would make an amazing poster. When Mandy is recounting her adventures to children at a birthday party, a complimentary blue-green colour scheme enlivens the pages. In serious-toned flashbacks, the colours grow darker. Similarly, the character design travels through a spectrum of emotionally distinct styles that range from magical girl anime kitsch to something out of a Dave McKean comic.

The plot’s weaknesses and strengths both stem from its use of mise en abyme. Eclipsing any grounding information about the world outside of the frame story are Mandy’s adventures, presented intra-diegetically as the contents of the comic’s titular book, which Mandy reads aloud at the party, and extra diegetically as a series of flashbacks to readers. Without a strong, unifying frame, each tale operates independently of the other, creating a disjointed narrative rather a nesting doll plot.

While the comic does a fantastic job at rendering creative action sequences, it disregards character development and world building. Mandy and the rules of the urban fantasy she inhabits remain shrouded in too much mystery. So extreme is the gritty ambiguity until the character guide acts more as a buttress for the narrative than an aesthetic, supplemental guide, providing details that wouldn’t otherwise be apparent.

The strongest component of Warner’s passion project is the scene where Mandy must save two children from a group of human henchmen in a warehouse. It draws parallels between beasts and beastly people. Rather than focusing on remedying its faults, the comic, if made into a series that provides much-needed establishing details, could experiment more with the this approach. The diverse motifs that lie behind what it means to be a monster would reveal not only the presence of beastly humans but also human-like beasts that could act as allegories for the evils of society. An attempt at this already punctuates the end of the comic, when Mandy explains the existence of benevolent monsters in the framing story.

Are you a fan of Mandy’s adventures? Let us know in the comments section or send us a Tweet! You can grab your copy of Mandy the Monster Hunter: The Mandy Book of Monsters from Hellbound Media.