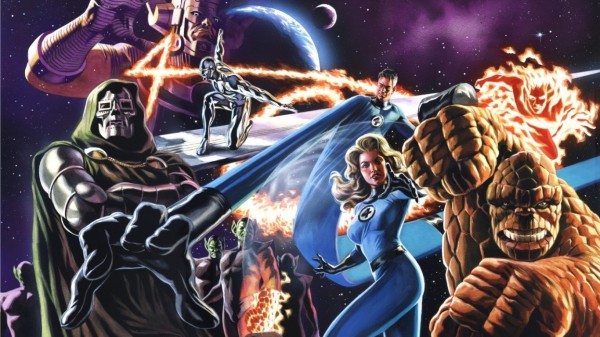 Alas, the Fantastic Four. The Kenny McCormick of the superhero film genre. We have had four films now based on Marvel’s first superhero family and each one of them have sucked. I could still forgive the Tim Story movies, they at least tried to capture the family-based relationship of the Fantastic Four, even if Doctor Doom was a complete joke and Galactus was transformed into a cloud. With the epic failure that was the miserable 2015 film reboot, Fox seem to now be just-clinging to the license and are said to be announcing a more kid-friendly reboot.

But then during this year’s San Diego Comic-Con, Noah Hawley, the mind behind Legion, announced he was developing a film based around Doctor Doom, and Dan Stevens may be involved in some form … and a billion or so questions arise. Fox nor Marvel have made any announcements or press releases about Hawley’s plans, but what does this imply? An origin story for Victor Von Doom that leads to his rise as dictator of Latveria? If so, will he meet Reed Richards or battle the Fantastic Four? Will this lead to another cinematic spin-off universe like what Sony is planning with Spider-Man side characters, only around characters related to the Fantastic Four? Will the Fantastic Four not even be appearing?

I thought it would make sense to resurrect my old article style, in which I suggest hypothetical ways to create cinematic universes around various properties. In this case, it would be the Fantastic Four. Now, there are two options. Put them in the MCU, or do a separate, shared universe like X-Men and the new Sony Marvel Universe.

Let’s go with the second option

In this option, the Fantastic Four and Doctor Doom exist in their own universe. The first thing to discuss is what this Doctor Doom movie would be about; I am going to guess that it is an origin story for Doom. In the comics, Doom was a Romani boy whose talented healer of a father died escaping from a villainous baron, and Doom harnessed his mother’s magical powers to get revenge. He mixed magic and technology to create amazing inventions and eventually enrolled in university where he meets Reed Richards. He built a machine to speak with the dead, but it was damaged by Ben Grimm, scarring Doom’s face. He then was raised by monks, crafted his signature armour, and rose to power as the dictator of Latveria.

That could be an interesting story to play out on the big screen, and could also be used as an introduction to the Fantastic Four, with Reed’s subplot being the design and construction of the space shuttle, which would eventually lead to the birth of the superheroes. The unnamed baron could be reimagined as a more major threat, not just to Doom, but to the whole of Latveria, encouraging Doom to return home to both liberate his people and later take over as an even worse ruler. Doom is a very complex character and his mix of hatred for Reed, and duty to his people, as warped as it may be, would be great motivations for him. We could see him create his armour, don it, and venture into battle against his first nemesis, mixing magic and science, utilising his infamous Doombots and awesome stuff like that; however, Doom can’t get over his resentment towards Reed and vows revenge.

Now, this idea was suggested by numerous people, including Bob Chipman and Diamanda Hagan, as the start of a Fantastic Four movie – Reed Richard, Sue Storm, Johnny Storm, and Ben Grimm board Reed’s shuttle, go into space, enter the Negative Zone, get exposed to cosmic rays and gain superpowers. However, the twist is that when they crash-land back on Earth, it is no longer the 1960s (which the Doom movie would be set in), but rather the modern-day. The four are now major fishes out of water, in a world they no longer recognise, and now have powers they do not understand.

Mr. Fantastic would likely work to find a way to reverse their transformations, the Thing would deal with his new appearance, the Human Torch would embrace the whole thing, and the Invisible Woman would remain the heart of the team holding them together. She would also take the opportunity to find her own place in a world where women are more free to do what they want rather than just being a loving, supportive wife/girlfriend.

Of course, the main story element would be the family dynamics. The four all have intertwining, complex, sometimes tense relationships with each other, and not just the often “heated” conflict between Johnny and Ben. You’ve also got Reed and Ben’s conflicted relationship, Sue trying to tether down the carefree Johnny, Reed and Sue’s own romantic and personal relationship. Each member of the Fantastic Four is important to the other three, acting together as the keystone to the rest of the group. It would be so easy to make Ben and Johnny the stand out characters, but Reed and Sue are just as important. In particular, Sue is the glue that stops the three men from resorting to blind, stupid violence to solve their issues, and she is by far one of the strongest, smartest, and greatest superheroines in the industry.

Now, frankly, when it comes to the bad guys, it would make sense to have Doctor Doom as the main villain of a Fantastic Four film, since he’s already established in this hypothetical cinematic universe. I would leave him for a potential sequel, since this film would be focused on the Fantastic Four finding their feet and place in the world, and throwing Doom at them too early would take focus away from them. Instead, I’d go with another supervillain; perhaps the Puppet Master, whose daughter Alicia Masters forms a romantic relationship with the Thing. He is a pretty sinister and creepy bad guy who can control other characters using some sort of alien/magic clay.

However, I’d also like to see Mole Man be a major antagonist. An idea for the 2015 film had the Mole Man as a supporting character played by Tim Blake Nelson, but he was rewritten as a generic government suit. However, another dropped plot in the film had Mole Man working in the Baxter Building creating artificial life, ultimately creating the Moloids, but one mutates and becomes Giganto (the butt-ugly monster in the first issue of the comic book). That sounded like a great idea instead of a mopey Reed Richards abandoning his friends, Bruce Bannering across the world and changing his ethnicity using his superpowers.

Yeah, so we would go with Mole Man as the main antagonist of the film. He is sympathetic in a way, shunned by humanity for his appearance, and eventually becomes king of an underground kingdom. He invites the Fantastic Four to share in his new world, but wants to punish society using his newfound monster creations, putting him at odds with the heroes, who wish to protect the world despite being strangers in it. This would allow the Fantastic Four to wrap up their initial group arc in their film series.

Other ideas I am just throwing in here would be to have Johnny’s friend Wyatt Wingfoot, and the postman Willie Lumpkin, in supporting roles (mostly to get Stan Lee in there). Have Reed become fascinated with today’s tech to build the Fantasticar, symbolic of his lost hopes of the 1960s “world of tomorrow” and moving on to embrace the present. Drop hints for a larger world and other characters and have a post-credits revealing Doctor Doom living in Latveria, discovering the Fantastic Four are alive and making plans to get his long-lasting revenge upon Reed Richards.

This is a pain and several major characters and factions connected to the Fantastic Four have appeared in the MCU, so they would be inaccessible. The Kree and the Inhumans are both out, and I doubt She-Hulk would be able to appear either, unless the Hulk gets an unnamed reference to avoid legal issues. I would love to finally see Namor the Sub-Mariner appear in a Fantastic Four sequel, and perhaps then get his own spin-off series. I see you DC Comics fans – he is not a ripoff off Aquaman, but rather predates him by two years. Namor has his own wondrous underwater world, and a couple of films could be made from his corner of the Marvel universe. Other characters, like say Nova or Thundra, could have a movie spin-off if established in this universe.

As for the Skrulls, they have a number of interesting characters that could earn their own movies, such as Super Skrull or Lyja the Lazerfist. A number of films could be based around the Skrulls invading humanity from within, and it is up to the Fantastic Four to flush out the fakes, leading to all out war i,e. The Secret Invasion storyline.

(And now it has been announced that the Skrulls are going to appear in Captain Marvel …  well that idea goes out the window.)

Another important character is Franklin Richards, the son of Reed and Sue, who is a mutant in the comics. Now, obviously, both mutants and Inhumans are taken, so perhaps Franklin’s amazing reality-warping powers are a side effect of whatever lingering effects are left over from his parents’ exposure to the Negative Zone. This could attract the attention of the evil Annihilus, ruler of the Negative Zone, who wants to siphon Franklin’s powers for his own.

In the comics, Franklin accidentally ages himself into adulthood, but before that happens, I would imagine him trying to be a superhero, albeit a young one. What if he teamed up with a bunch of other children with superpowers to form the Power Pack! Franklin eventually ages himself into adulthood, and could go on to create the Future Foundation, implied to also be a potential film project alongside Hawkins’ Doctor Doom movie. And that brings us full circle.

Of course, it would be a lot simpler if Fox simply handed the rights for the Fantastic Four over to Marvel and solely focus on what they are doing with the X-Men brand. If they are planning something new, we can try and hope that it will be handled with care unlike their past debacles that they had the shame to call Fantastic Four movies. Anyway, these ideas are just for fun and to offer some starter points, but, if by chance any Fox executives somehow stumble across this article, then please send me a message. We can do lunch … as long as it is in England!

What are your thoughts on the new Doctor Doom movie announcement, and will it evolve into something … fantastic? Nope, not apologising for that one. Would you like to see the Fantastic Four join the MCU or star in their own corner of the Marvel universe? Leave a comment below or on Facebook or Twitter.