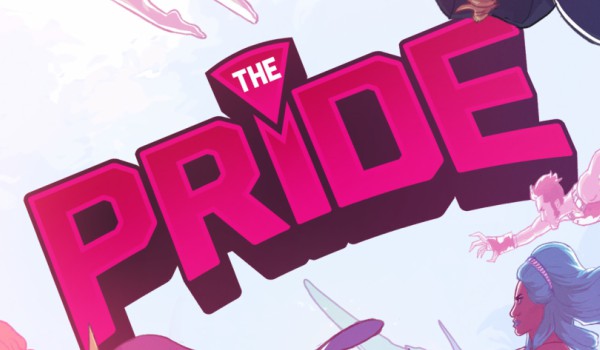 The first instalment of this very vast collection of varying sizes of comic stories sees the coming together of our out-of-the-closet gang soon to become the band of heroes aptly named The Pride.

Written by Joe Glass and with artwork by Gavin Mitchell, Mike Stock and Kris Carter, the good guys throughout The Pride face a few bad guys of an evil nature but there is a link in who they end up against and that’s usually the opposition’s homophobic attitudes. We see bullying kids, a religious reverend with an axe to grind in thinking he can cure the pride and then there’s the Justice League, yes, even the good guys weren’t impressed at having a gay member of their group, not very family friendly apparently.

The good guys come in differing sizes and styles of gender. The rough and ready are drawn with shades of dull and heavy and flamboyant protagonist is drawn with that flair of pink supporting his nature and character. All art seems of a sketchy nature with true lines and shading in places but to no detriment of the appearance of the comic in any such way.

There does seem to be a comparison to the X-Men characters and maybe even a Thundercats moment too but in all honesty it’s not a bad thing. It’s a comic with a theme throughout its representation and what a breath of fresh air in its political and social tone.

We cover issues that relate to people’s views on the subject matter including bullying, HIV, depression and suicide with that slight suggestion of alcohol reliance too. Don’t we always find the hard nailed hero in a bar drinking inexplicable amounts of booze. Interestingly there is a small discussion of the image of the LGBT crowd with the argument that Trans Gender is still the new kid on the block.

The extras are great for hard-core fans of the comic form and genre in general or anyone who has come across any of the excerpts of this collection by the creatives behind this anthology.

Not too much gore and only the usual violence in here. This appears as a show piece or at least has that feel to it although it’s always difficult to introduce any set of characters and back stories. This is a great comic to break us into the brand, the entourage of the creatives behind this piece of comic work and with the pun intended they should be proud. Give the usual rhythm of a comic style book the day off and pick up these superhero chapters for a different reason.

Joe Glass will be taking The Pride to London Super Comic Con this weekend! In the meantime, you can pick up The Pride from the comic’s website. Are you already a fan of the comic? Let us know in the comments section below or send us a Tweet!