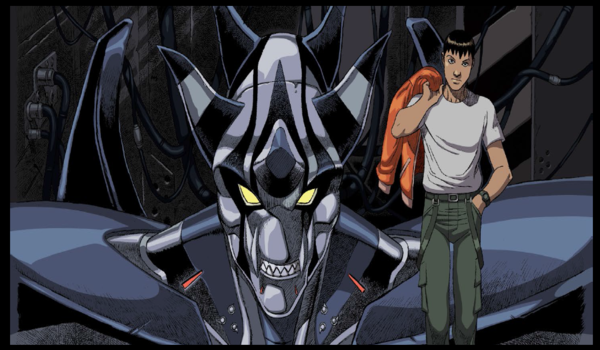 Super Robot Mayhem #1 is an enjoyable comic, though not quite what i expected. The title is such a perfect crystallization of the mecha genre, an announcement of intent. “This book” it seems to say “is gonna blow your mind with robots punching each other.” And sure, there are glimpses of that here and there. Brief flashbacks of giants robots fighting, scenes of derelict space ships, the pronouncements of an angry alien empress. But the vast majority of Super Robot Mayhem #1 is devoted to less flashy, but necessary, matters. With a solid setup and an alluring glimpse of things to come, this first issue puts together a solid setup for the mecha mania to follow.

Super Robot Mayhem #1 introduces us to the future pilot of the titular robot: Raiden Nakamura. He’s a comet miner out in the Kuiper belt, working on the I.S.S Theseus. He and his friends, including the wheelchair bound daredevil Ulysses, discover Mayhem; a massive alien robot in a comet. It’s a relatively simple plot, but creator Jeremy Biggs does a good job of making it feel substantial by focusing on the friendship between Raiden and Ulysses. 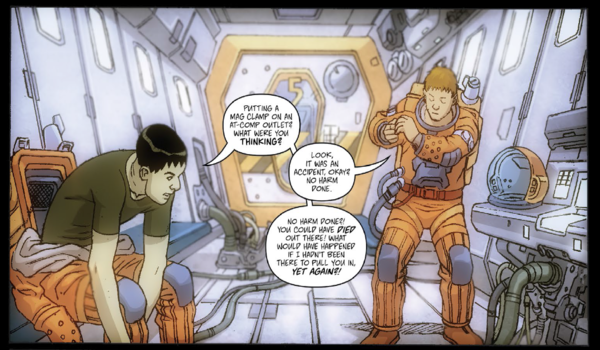 The dialogue in Super Robot Mayhem #1 is fast and easy to digest. Characters trade quips and build relationships in an unforced way that is pleasant to read. This is mixed in with text boxes  relating a future interview between Ulysses and a military officer. They provide a cryptic clue to future issues, and a suggestion that Raiden’s discovery has sparked a deadly war. Though more set up then payoff, it is a plot that left me waiting for the next installment.

Javier Bordon‘s art is genre perfect. It expertly evokes the style of Mecha anime like Gundam, Gurren Lagann, Voltron: The Legendary Defender. The faces of all the characters are unique and expressive, Raiden and Ulysses especially. The giant robots are drawn with great attention to detail, Bordon clearly loves the genre. It is impossible to translate the dynamism of animation in print, but Super Robot Mayhem gets quite close. Reading this comic feels a lot like watching a mecha anime, and some of the panels were truly stunning. The colouring, made with the help of Yel Zamor and Jeremy Biggs is deftly done, and helps each panel really pop. 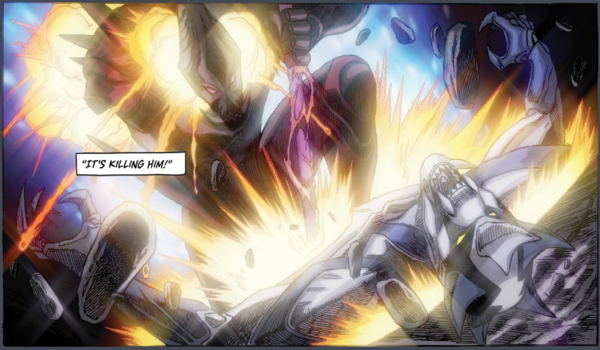 These strengths make Super Robot Mayhem #1 a breezy, enjoyable read, and hint at a great future for the comic. But there are a few problems that the future issues need to address to fully capture the majesty of giant robots fighting each other. Though the plot is generally cogent, it is sometimes a little hard to understand what the time frame is. How far ahead is the flash-forward to a wrecked space ship being raided by aliens? When do those images of Raiden in Stasis occur? How far ahead were the interview tapes made? All of this is unclear. The text box conversation between Ulysses and the officer are also a little cryptic. There is no real difference between Ulysses’ text boxes and the officer’s, and it can sometimes be hard to understand who is talking.

But these problems do not detract much from Super Robot Mayhem #1′s overall strength. It is an intriguing and visually stunning prelude, and what temporal problems there are can easily be cleared up in the next issue. I have the utmost confidence that the series will build on this excellent start, and live up to the title’s promise of raucus robot rumbles.

Subversive Comics will be taking Super Robot Mayhem to London Super Comic Con this weekend. In the meantime, you can check out more of the comic via Subversive Comic’s website. Will you be buying the comic? Sound off in the comments or send us your thoughts on Facebook or Twitter!