Home » Toning Down the Time Travel, The Gee Bees Presents: The Meditating Businessman Sets Up an Intriguing Future for the Comic 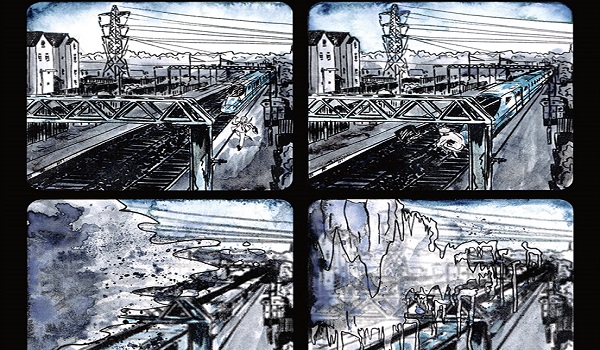 The Gee Bees Presents: The Meditating Businessman Issue #1 is another adventure for time-travellers Gideon Black and Katrina of the independent worldwide organisation, The Foundation. The story, written by Steven Quirke, art by Kel Winser, and lettered by Mike Stock, set after the events of The Grand Tour.

The issue opens with various scenes of suicides—seemingly not connected, but it turned out that they were. (The scenes are disturbing, so fair warning for anyone intending to read it.) In these continuing adventures of the time-travelling monster hunters, Gideon and Katrina are attending a fundraiser/party/function for the Foundation. Gideon met an old college friend, who shortly after jumped off the roof of the skyscraper. Naturally, Gideon and his faithful partner Katrina investigate. They tracked the deceased movements to a Happy Thoughts retreat for businessmen. Next time, they are probably going to go undercover or something.

Naturally, I knew that sounded like a scam, but it was an obvious ploy by series villain Maximilian to get money. Now why doesn’t the man who can time travel go get some gold from the past to fund his operations? If the money is so important to his schemes, that would be the easiest solution. Instead, Maximilian used his grotesques to scam rich businessmen out of their money, with the high chance that the Foundation would catch on and try to stop them.

For some reason, I don’t find Maximilian compelling as a villain. I kind of want to punch the guy in the face repeatedly. He’s smart enough to stay one step ahead of the Foundation, most of the time. But he’s actually kind of stupid, because he gets caught more often than not and have to start his plans over again. Gideon and Katrina are cool. I expect a lot out of heroes of stories. I hope that the plans of this comic’s villain get better. Maybe once we learn more about the man’s past will he become more compelling.

I believe that art was more refined this time around, not that I can tell one art form from another. With time comes better skills is all.

Overall, I liked the set-up for this story. I can’t wait to see what happens next, although I’m sure that Gideon and Katrina will be victorious.

The Gee Bees will be at London Super Comic Con this weekend. In the meantime, learn more about The Gee Bees at http://thegeebeescomic.co.uk/. Sound off in the comments or send us your thoughts on Facebook or Twitter!