Home » Vanguard Twists the Superhero Genre on Its Head 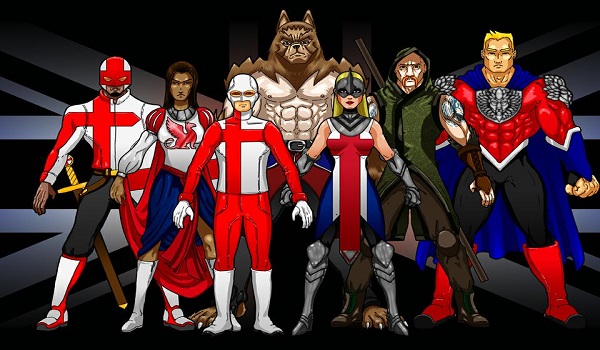 Vanguard is a UK-based, ongoing web-comic by Dan Butcher. Book 1 includes issues #1-#5 and profiles of the Vanguard meta-human team. I didn’t really know what to expect going into Book 1, having read plenty of superhero comics over my lifetime.

The story opens with a plane crash landing in Burma. In Vanguard, Burma is going through a serious civil war that dangerous for all parties. Unfortunately, it was a privately chartered plane carrying one of the UK’s many government minister’s daughter. Naturally, the Vanguard superhero team are sent into action to rescue her and any other survivors, just without a well-thought out plan and a new kid along for the ride.

Immediately, the mission goes to bed and things just get progressively worse from there, even if the team managed to save the girl. Vanguard member Ophelia discovered a mass of missiles set to launch. It was a disaster when they couldn’t stop all of them. Russia, who had been in the middle of their own civil war, was restricted by anti-government rebels, led by a madman. The Korea situation got much worse. China invaded Taiwan. The UK was forced to put their people on rations (and when there’s food, things are just going to get worse). The Vanguard’s pay is even frozen. There’s a severe lack of oil and it’s being rationed as well.

There’s a lot going on in Book 1 — when Eagle-5 (the US superhero team) go into Russia to handle the situation, the Paranormal Doom (the Russian superhero team) literally decapitated them. It’s brutal, but poignant.

Without getting into much details, Pendragon, the leader of the Vanguard, and Ophelia both discovered a corruption in the UK. Pendragon and his friend Cates go into Switzerland to hack a mercenary company’s server for information. Meanwhile, the Nine (the covert UK superhero team) show their true colors as they murder the General and his family on the hunt to cover up the wrong-doings of themselves and their boss.

At the end of the book, an arrest warrant was put out for Pendragon (and a kill-on-sight order) and the rest of Vanguard were ordered to be captured.

The plot is brilliant. It’s intricately woven, with both political and military intrigue are disguised as a superhero story, it was fascinating. There was no time wasted in convoluted back-stories and needless drama, which I appreciate. I was automatically sucked into it.

All the characters are morally gray, which was great (as it should be, I think). My favorite character is Pendragon and I’m quite fond of Woden, a Scottish druid. I dislike that Maxtreme character, so much. He needs a good thrashing, that sell-out wannabe Superman.

Dan Butcher is not afraid of bloodshed, good battles, and death. And that is a very good thing for his story. I also like his inclusion of news reports to help speed along the story set-up. They certainly read like every news anchor I’ve ever listened to on television. I also like the use of tabloid front covers, the ads for Team Xtreme, and later the wanted poster of Pendragon. Well done in it use, I say.

There was only one tiny quibble that I had with the first book. The story went straight to the Burma mission and I wasn’t sure who all the characters were at first. If I hadn’t read the profiles at the end of the book, I wouldn’t know anything about them or their position on the team. However, the characters are introduced with a caption of their name, superhero identity and team affiliation. When Vanguard is done and the creator writes another series, I would suggest make those little blurbs at first introduction of the main characters.

My overall conclusion of Vanguard Book 1 is that it was awesome and totally worth it to read. The story is so well-done and the characters aren’t two-dimensional, no pun intended. It is appropriately grim and dark. The political and social commentary was great. And the use world politics was well-done. Kudos to you, Dan Butcher! I love Vanguard.

All of Vanguard‘s issues can be read for free on the comic’s website. Are you a fan of the comic? Sound off in the comments or send us your thoughts on Facebook or Twitter!