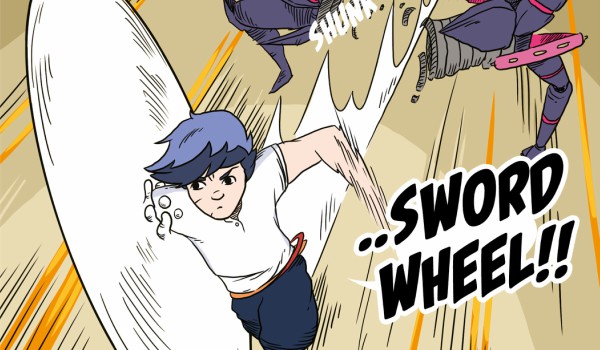 I’ve waxed lyrical about how much I adore Nich Angell‘s marvellous fantasy/sci-fi adventure comic 7STRING many times here at A Place To Hang Your Cape. Fashioned in the mould of world-spinning adventure sagas of the past, it’s a tale of youthful war set in a world constructed out of music. Since picking up both Volumes 1 and 2 of the comic back in 2015, I’ve been waiting feverishly for the story to continue, having left on something of a cliffhanger as our hero, Zach, grows his fantasy-laden powers to exuberant levels in an effort to make himself ready to tackle Lars, the man responsible for murdering his mother and enslaving the world of Melodia. Fusing aspects of the traditional adventure-stuffed vengeance story with a wide-eyed, vibrant innocence, 7STRING is a title I don’t hear enough of in the indie comics community.

It’s a thrill therefore to be able to write about 7STRING: Track 6, the sixth instalment in this ever-growing saga. However, this isn’t the great leap forward I was expecting it to be, but that’s no bad thing. I’ve had the good fortune to read 7STRING‘s adventures in one blast, meaning that I’ve experienced Angell’s roller-coaster approach to world-building all at once. Melodia, the multi-cultural world in which 7STRING takes place, is shown at great length throughout the past five Tracks. The four tribes that inhabit the world, Brace Clef, Trouble Clef, Altern Clef and Tremor Clef, boats their own unique cultures centred on musical forms.

What Track 6 offers instead of this is something of a minor step forward for 7STRING; here, we dispense with world-building or multi-character-driven subplots that have characterised 7STRING so far and instead focus on Lars and Zach’s quest for power. Not that we haven’t been seeing that since Track 1, but it’s given such emphasis here that Track 6 is perhaps 7STRING‘s most intimate instalment yet. What’s more, the intimacy feels very natural. We’ve reached a stage in both Lars’ and Zach’s journey that necessitates a period of tonic-like reflection of where they are in their quests. Now that much of Melodia is in his grasp, Lars shifts his reign of terror from conquering the physical landscapes of Melodia to setting his sights on the world’s Gods. Where will this man’s obsession with power and conquest lead him? His ambitions may be endless, but the path he’s on feels like he’s collapsing under the weight of his own tyranny. It’s great for Angell to take this traditionally moulded-villain and show the cracks starting to form, because it emphasis 7STRING‘s nature of being a heartfelt homage to retro fantasy adventure, embracing it with a palpable warmth.

Conversely, where Lars’ journey feels like an evolution, Zach’s journey feels like a culmination. We’ve seen him battle his own demons in the past, but here he appears very much in control of his own fate. The two-sword-wielding sharp & flat power-up he developed in Track 5 against assassin duo Delaye Petal and Sustaine Petal is once again rolled out in full force, but Zach’s quest to develop his inner warrior is shown to the extreme here. In one of 7STRING‘s most delectable fight sequences yet, Zach lays waste to a small army of robotic food soldiers under the command of Lars with relative ease. We’ve seen him kick arse before, but it’s been at the expense of his own well-being, pushed to the limits to defeat his enemies. Here however, it’s refreshing to see his confidence grow as a fighter. When I interviewed Angell last year about what Volume 3 of 7STRING will be all about, of which Track 6 is the opening issue, he hinted how this new power up will play a vital role in Zach’s journey – “Most importantly that new ability he unlocked in that battle is going to play a huge part in this book as he commands its true incredible potential.”. Nich, you tease!

The stage is set for Lars and Zach to engage in their inevitable confrontation and put their powers to the ultimate test. Beyond these two characters however, there’s little else that can be said about Track 6. Such an emphasis on showing where we currently are with these two characters means that there’s little in the way of actual plot.For a story that’s been fruitful in its delivery of moving the plot forward, showing the fallout of Lars’ tyranny across Melodia’s individual communities, we don’t really see that advancing. It feels as though such key features of 7STRING have been ground to an unexpected halt to allow this comparatively contemplative chapter to happen. It’s a welcome change of pace, but it’s sudden appearance can’t help but feel jarring in its delivery.

Track 6 is both a simple yet rewarding chapter in the 7STRING saga. It’s subtle emphasis on characters may hide behind a thoroughly enjoyable blitzkrieg of action and adventure, but it’s when the two work in tandem that 7STRING is at its best. Track 6 provides us with a welcoming change of pace that pauses the story, but kicks these characters into overdrive.

You can read 7STRING: Track 6, as well as past Tracks, for free on 7STRING’s website and Tapas. Follow the adventures of 7STRING on both Tapas and the comic’s Facebook page. Head over to Big Punch Studios to check out Volumes 1 and 2 of 7STRING as well.