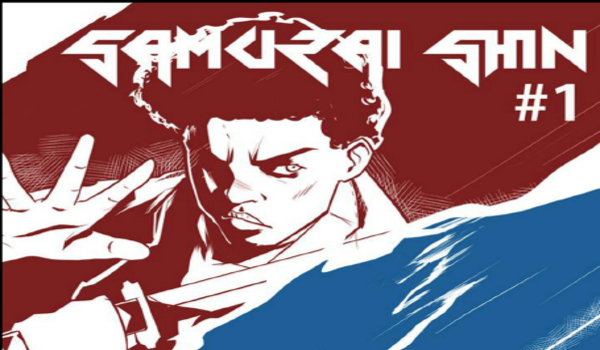 Samurai Shin #1 & #1.5 are best read together, to the extent that they should probably have been bundled together as one comic. Both opening with a nearly deadly confrontation between young samurai and childhood rivals Amir Atsuko and Keith Masaru, the two issues diverge into telling the individual boys stories, and foreshadowing the conflicts that approach. Though the stories of both are suffused with action and leave tantalising hints to a larger world, Samurai Shin finds itself hampered by clunky dialogue and spelling errors that harm immersion and make parts of the story difficult to read.

Issue #1 shows the full extent of Amir and Keith’s confrontation. During a training session, the two nearly kill each other, saved only by the intervention of their master, Kenzo. Immediately afterwards, Keith leaves the battlefield, off to strike out on his own. Amir spends the rest of the issue recovering, until a mysterious samurai in a bear mask attacks the town. He and his mother, who had defeated the bear headed man before, fight back, but are eventually overwhelmed, with Amir’s fate uncertain. Amir is an interesting character, skilled yet contemplative, but he does not get the development here he deserves

Issue 1.5 also ends with a similar confrontation between Keith, his father, and the bear masked samurai, though it takes place in a flashback. Keith, frustrated by village life, recounts learning to fight from his father, and his rivalry with Amir. The origin of the boys rivalry is especially well done, borne out of Keith’s anxiety, and Amir’s slightly superior skill. The flashback climaxes when the bear headed samurai, Makura Shin, and his gun wielding, philosophising associate, Umar Akuma, kill Keith’s father, and set him on a path of revenge. Overall, it is a much more solid issue then the first. The action scenes have more time to simmer, and Keith is given far more development and backstory then Amir is in issue #1. 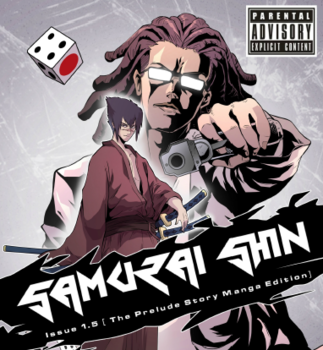 The general plots of author Mikel Miles are not particularly complex, and the world they present at first is standard samurai fare. But the picture that appears at the end of #1.5 indicates that Samurai Shin takes place sometime in our future, presumably in a japan that has fallen back on older customs, but retained some modern technology. This premise is intriguing, and the decision to reveal it only after about 60 pages of narrative have passed is a bold one. It ads a feeling of gradual discovery, though it could have been aided by more hints along the way. Miles obviously has a fully realised world he hopes to convey in Samurai shin, and though the portrayal can be clunky at times, other

The first issue and the second issue share some artists, but they have markedly different color palettes and tones. Drawn primarily by Ivan Earl Aguilar and Fahmi Fauzi, Samurai Shin #1 one is awash with colour, with soft lines and curved faces that accentuate the characters facial expressions. There can be a wide range of inconsistency in quality of illustration, but the general feel comes through. Though characters faces can often be odd and distorted, what Aguilar’s and Fauzi’s art lacks in exact representative detail, it makes up for in portrayal of raw emotion and action.

Harley De la Cruz‘s art in Samurai Shin #1.5 is a far more direct evocation of the style one might find in a similarly themed Japanese manga. Technically, it is more coherent then the previous issue. Drawn in black and white with crisp, clean line work, backgrounds, characters, and expressions alike all come in clear to the reader. There are a few odd places where colours are reversed, but all in all I find the illustration to be quite well done. Sukma Agustrriyana and Fhami Fauzi‘s art and cover work are also worth noting, and the cover signals right of the bat that it is not a typical medieval samurai story.

Samurai Shin’s biggest flaws seem to come out of a rushed execution; there are some elements of both comics that seem as if there was not second review of the script. Art inconsistencies, as mentioned above, distract the reader. Issue one especially suffers from spelling issues, with some basic mistakes (your vs. you’re, some typos in the text.) In the non-action scenes, dialogue tends to clump up in huge bubbles, characters are prone to soliloquy, and exposition goes on a bit longer then it needs to. Perhaps most importantly, the first issue does not grab the reader as much as #1.5 does. This inconsistency between issues may alienate readers, and they may not stick around for #1.5, which improves, and improves upon, the 1st issue.

These errors are compounded by some problems with lettering and word bubble placement. The lettering itself is blurred and in a distracting font, of far lower quality than the art. The letters either push up uncomfortably against the word bubble, or leave a huge amount of blank space. text bubbles and boxes often feels almost haphazardly placed over the image, and it really harms the flow of the book. These are essential problems for the creators to fix in upcoming issues.

Samurai Shin still feels like it is finding its feet, and future issues could definitely use some thorough review to catch the occasional error. But the world it posits is interesting, and it makes me want to learn more about the backstory, and what the boys will do to avenge their parents. If I have any advice its that the dialogue for future issues could use some further review to more sleekly express the strange, violent world that Mikel Miles envisions.

You can discover more about Samurai Shin from its website! Are you already a fan of the series? Let us know in the comments section or send us a Tweet!