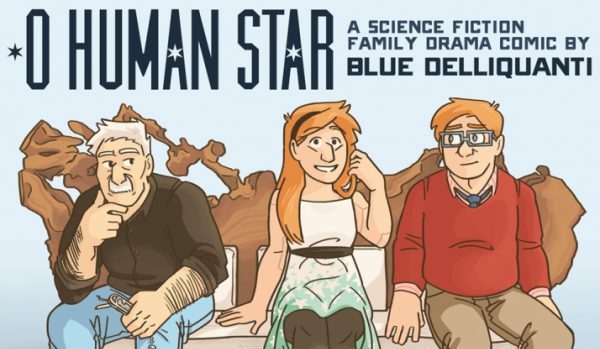 What makes us human? Is it our memories, our brains, or our souls? That is the central question at the heart of O Human Star. Taking place in a future world with robots it deals with the idea of what if someone could save a copy of your brain and upload it into a synthetic body for you. How would this affect you and your loved ones and what if the procedure did not go as planned?

Alastair Sterling wakes up one day discovering he died sixteen years ago and now has a synthetic body. The graphic novel then follows him as he reconnects with loved ones and sees how the world has changed. There is also the mystery of who built him his body but that is put into the background for the more personal and emotional story at the forefront of the graphic novel.

What the story really ends up being is a metaphor for a couple who are reunited after sixteen years apart and try to pick up where they left off. Alastair is reunited with his partner, Brendan, and all the emotional issues that entails are brought up. The interesting wrinkle though is right before Alastair died Brendan tried to copy his brain to make a synthetic but it was not finished in time. The resulting synthetic has some of Alastair’s qualities and memories but not all of them. Brendan then raises the synthetic like the child he never had with Alastair, so there is also Alastair dealing with this child he never knew he had which also plays a major part in the story.  This is standard family and relationship drama but with an interesting sci-fi element and like all great sci-fi, it is being used to show us something about ourselves and what it is that makes us human.

The book does seem to rely too much on flashbacks to padded out the story. While they are important and fill out the details of Alastair and Brendan’s life before Alastair passed away they sometimes go on too long or go over familiar beats and material and I want to get back to the more interesting present day story. How many times do we need to see Alastair and Brendan fight or see another example of Alastair’s awkwardness and unsocial behavior.  What I really want to know is how Alastair’s replicate is adjusting to his life in the present and what is going on with the child replicate version of him. Sulla, who is the female teenage replicate of Alastair, is the most interesting character in the book as we see her meet her idol and deal with normal teenager issues with the added wrinkle of being a robot. It could be just a personal preference but I enjoy the comic more when the sci-fi elements are mixed with the drama more than the more straightforward relationship issues of the flashback scenes.

O Human Star uses sci-fi elements to reflect on our own humanity and society like all great sci-fi does.  An over reliance on flashback scenes does drag it down but the characters are engaging and the present day scenes are terrific leading to a wonderful human drama in sci-fi clothing. O Human Star comes highly recommended to those who want deeper, emotional meanings to their science fiction.

If you are interested in picking up O Human Star you can do so from the comic’s Big Cartel site.. If you have read O Human Star what did you think? Let us know in the comments and/or on Twitter.