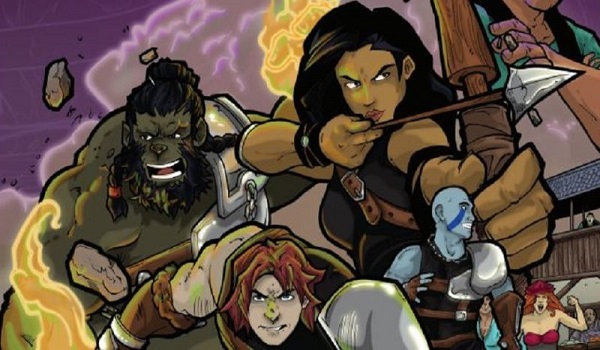 Days of Dark Fire is a fantasy epic adventure written by Giovanni Smith and drawn by Mike Ganghran. The first three issues are “Lessons Learned” arc. Days of Dark is set on the fictional world of Embrerix and centered on the two great phoenixes of their world–The Gold Phoenix and the Dark Phoenix. The tale opened with a page of the history of the world explaining how things went. The Gold Phoenix and the Dark Phoenix, polar opposites clashed. The Dark Phoenix had an army of trolls, howlers, and Red-eyes. The Gold Phoenix, in response, gave the humans wings of fire. The Great War resulted in the humans losing their wings of fire, the two phoenixes being chained magically, and a divided world.

200 years after the Great War, young Prince Russell, the immature yet well-meaning second son of King John, finds himself in loads of trouble because of decisions made due to nightmares and his need for his father’s approval.  The main bad guy, other than the Dark Phoenix, is this mysterious fellow in a magical mask who is totally obsessed with Prince Russell (it’s kind of creepy).

Issue #1 began with a classic yet tired fantasy plot–main character does something stupid in order to make father/whoever think he’s responsible. Prince Russell, with bodyguard Tyson in tow, takes the experimental glider for a spin and it immediately goes awry. Issue #1 is mostly a set-up. The other two characters, Melody and Barrel, of the main character’s party were also introduced.

Next, in Issue #2 of Days of Dark Fire, this issue is what begins to set it apart from typical fantasy stories. The divide of the kingdom is evident. No one trusts anyone and things go from bad to worse.  Issue #3 had Russell actually faced serious consequences. Russell and his three companions are exiled to the griffin farms, where more trouble follows, before ending on a cliffhanger.

Days of Dark Fire has great world-building, although it does, at times, throw too much at the reader. I always appreciate a good map to help find your place in a new world. I like that they also had a recap page. The issues themselves are easy to read and draw you in. Issues #1-#3 are really beginning chapters to what’s going to be an epic, long story. The art is clean and well-done.

One aspect that I really like about the story is the fact that the humans lost their wings of fire and ability to soar through the skies. Humanity is on constant trial–Barrel comments that humans call him a monster, when in fact, they do more monstrous things than anyone. The whole story feels like a giant redemption story and I like it.

I like the characters of Melody, Barrel and Tyson. They are fleshed out, nuanced characters. Melody was a reject and is looking for revenge. Barrel lost his mate and seeks redemption. Tyson, basically immortal, plays the fool to hide his pain at losing so many people.

However, there’s only one glaring problem I have so far with it. It’s the main character. The main character Prince Russell is a very generic main character at this point. I have read many fantasy stories in my life and Russell is a typical fantasy male hero. Russell has an inferiority complex, he doesn’t think about his actions and the consequences they have, and he’s quite self-centered and sheltered to a degree that makes me agree with his father to not send him out to battle. I hope that in the coming chapters that Russell’s character arc will make him a special character and not a generic one.

Days of Dark Fire has the makings a great fantasy story with amazing characters and a battle between good and evil. I can’t wait to find out what’s next.

Read it here and let us know what you think.  Sound off in the comments or send us your thoughts on Facebook or Twitter!