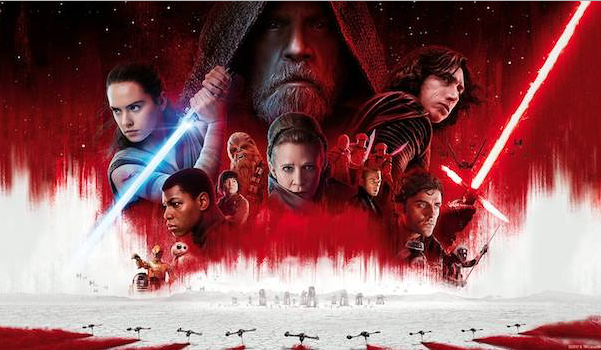 Two years ago, we were graced with the beginning of a new era of Star Wars movies. While a lot of people pawned it off as a “remake” of A New Hope, I personally loved The Force Awakens.

Last year, we were given Rogue One: A Star Wars Story, which wasn’t exactly a new chapter as it was a filler movie. Once again, we had the opposing views from people who loved it, and those who thought it was rather mediocre. As for my opinion, I wasn’t a huge fan.

Last night, The Last Jedi made its way into theaters. I gotta say, this is probably the most polarizing film in the entire franchise. For every single Star Wars movie that’s been released, I found that there was always one opinion that was the majority. With The Last Jedi, I think that the fanbase is evenly split. Some people loved it, others hated it – but there’s no real majority here. While most professional critics apparently loved it, the fans think otherwise. What’s my opinion on the matter? I really enjoyed it, but I’m honestly not sure if I liked it as much as The Force Awakens.

With that being said, I’m going to give my full, fair, honest review. Like I did with TFA, the first page will be as non-spoilery as possible. The second page will be spoiler-heavy. Readers beware…

Now, let’s get this review started!

First up: the visuals. One of the things I admired about The Force Awakens was the absolutely stunning imagery. Ever since the first trailer dropped, I couldn’t stop rambling about how amazing the movie looked. We live in a time where we can do wondrous things with computers, and yet people still complain about “obvious” CGI. I didn’t think anything was wrong with The Last Jedi‘s use of it, especially when you compare it to a majority of other big-budget movies out now (Superman’s mustache says ‘hello’). We didn’t get to experience a bunch of new planets in this movie, but we DID get to see some awesome shots in space, including a few hyperspace scenes that were pretty impressive (despite only lasting a few seconds). The CGI characters were handled properly as well; though, the porgs looked a little too cartoony. But come on, how can you stay mad at this little guy? 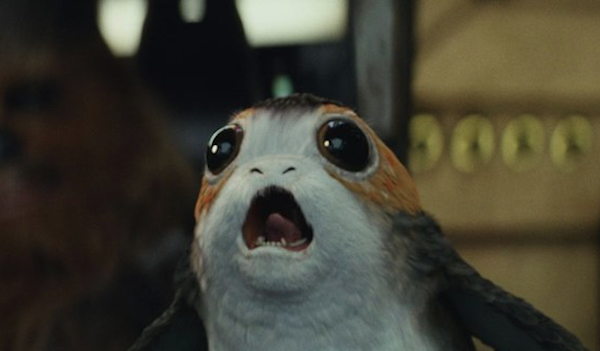 Which brings me to my next point: the characters. One of my biggest complaints about Rogue One was the fact that I didn’t care about most of the characters (aside from Darth Vader). They were all just people on screen to me. Space-fillers. In The Last Jedi, I didn’t encounter that problem. Even the most minor ‘main’ character (I won’t reveal much, but he’s played by Benicio Del Toro) had more personality than the entire cast of Rogue One.

But most of the credit goes to the man himself: Mark Hamill. His performance was absolutely amazing this time around, and you can tell that he went back and seriously studied Alec Guinness‘s performance as Obi-Wan in A New Hope to help him prepare for his similar role in this movie. It’s crazy to think that he is roughly the same age Guinness was when he played Kenobi. But that’s besides the point. The main thing is that Hamill was awesome as Luke, and after not hearing him speak a word since Return of the Jedi, his reintroduction was a breath of fresh air.

If you know me, you understand my hatred for Kylo Ren in the last installment. I hated him more than Jesse Eisenberg‘s portrayal of Lex Luthor. This whiny brat was supposed to be a badass Sith lord? Sure, he had a moment or two, but overall, he was incredibly whiny and too much of a brat. In The Last Jedi, though, Kylo becomes more of a boss. Why couldn’t he always be like this? We didn’t need the Hot Topic employee with daddy issues; we needed an unhinged, psychopathic badass, and that’s what we got. Bravo, Adam Driver!

I have to give some credit to General Leia as well. After Carrie Fisher‘s unfortunate passing, many fans, including myself, wondered how the film would honor Fisher and her character. I’m happy to say that Lucasfilms, Disney, and the rest of the powers that be definitely showed the proper respects to our fallen hero. Stick around for the mid-credit tribute to Fisher, which may make you shed a tear.

Now to talk about the plot. I’ll be very careful about reviewing the story without giving too much away, but there’s no way for me to give a fair review without spoiling it. So if you haven’t seen the movie yet, I apologize if my analysis of the plot seems a little too vague. I swear I’m doing it for your own good!

After The Force Awakens, people wondered if The Last Jedi was going to be a carbon copy of The Empire Strikes Back. Well, the good news is that it’s not. There are indeed many homages to the original trilogy, but the story is nowhere near similar. It’s almost like the movie intentionally tries to go in the opposite direction of Empire. There will be a moment where you think something familiar will happen, but then, it’s a complete turnaround. I feel like director Rian Johnson and his crew rewatched the original trilogy and thought “Okay, so this happened, now how can we deliberately avoid it as much as possible?” Does that all make sense? Sorry if it doesn’t. I’ll explain more in depth on the next page when I can get spoilery.

There’s one part of the story that I was not too fond of, and it involved Finn, BB-8, and a new character named Rose. This entire segment eats up about a half-hour of the film and seemed to only exist merely to pad the run time. When I realized what was happening, I almost rolled my eyes and said, “Well, this is going to take a while.”

I believe this was the longest Star Wars movie to date, and it really does feel that way. I don’t understand why movies feel like they have to be longer to be good. There are ways to get the point across within two hours. There were several moments where I felt like The Last Jedi could’ve ended, but it just kept going. In fact, there was one scene that I thought was the big climax, and it turns out it was barely halfway through the movie! But I guess that’s a good thing since I didn’t have to look at my watch and think “How much longer?”

My final verdict: I liked the movie a lot. But I can understand (to an extent) why some people wouldn’t enjoy it as much. However, I’m sure I can refute most claims about why it was “bad”. Again, that will all be discussed on the spoiler-heavy next page, so if you want to know more, then click on to the next section of this article.