Home » Survival, Family & Edinburgh’s Haunted Past: A Conversation with David Lumsden, Creator of The Boat 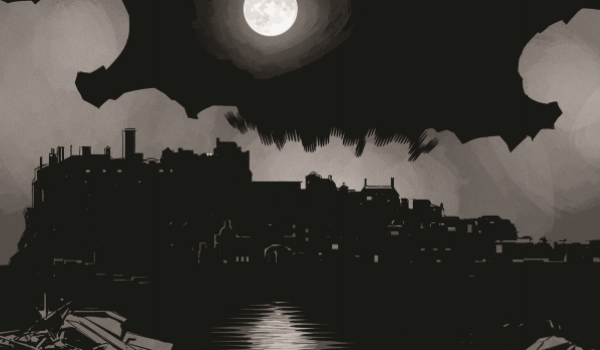 If you may recall, I was given the chance to review the first volume of The Boat, a dystopian series focusing on a father and son attempting to survive a world ravished by floods and natural disasters, all the while dealing with the monsters that stir both in this new world and within their own heads.

We’re now three volumes in, and it’s safe to say that the problems are only starting to grow for our survivors and the fragile peace of No Land, the title Blood in the Water, the third volume in the series, may prove to be more accurate than we realise. I was given a unique opportunity to pen some questions to David Lumsden, the creator and writer of the series. We get to learn more about the origin of the series, The Boat as a short film, and what is next both for the future of our heroes and his other projects…

AP2HYC: For those that are new to this series. Could you provide a quick enticing summary for your comic?

Lumsden: The Boat is a post-apocalyptic graphic novel set in a flooded, dystopian world. The book follows our main character Charlie from two points of view. One as a child surviving this disaster and trying to overcome personal tragedy and the other from his present, trying to endure new threats on the rooftops of the submerged city of Edinburgh now known as ‘No Land’.

AP2HYC: Have you always been a fan of comics? Who are your influences and favourite titles?

Lumsden: Yes, I have always been a fan of comics. I started reading them from a very young age, starting with 2000AD (Judge Dredd and Rogue Trooper) and Dark Horse (Aliens, Predator). I really liked the graphic novels that were film adaptations or spin offs. One of the first books I remember buying was James O’Barrs, The Crow. I loved how they did flashbacks in that book. These titles were a big inspiration for me starting to write comic books.

AP2HYC: The Boat tackles some very dark themes and ideas around the instinct of survival and family. What was the influences behind the story?

Lumsden: I have always been a fan of dark stories and Edinburgh’s history is known for its haunting past. I wanted to tell my own Scottish story but set it in the future. The Boat is a bleak story but I think deep down it has always been a story of hope and how people can go through a lot of adversity and endure pain but still keep going.

AP2HYC: The father and son dynamic present seemed to emphasise the dark plot devices and themes of survival. Why was this relationship presented this way?

Lumsden: I wanted to show the relationship between father and son in a different way and instead of showing the father as the strong character who is looking to save and stay strong for his son. He is a broken man. When we join the story he is looking for a way out as he doesn’t see a way to survive in this new world. It takes a young boy to find the strength to keep going. I think I wanted to take away all the elements of support from our main character to see how he would move forward. The story is about hope and how much you can hold onto it after losing everything.

AP2HYC: The story has the rather unique standing of being presented both as a comic and a short film, was this planned from the beginning? Why did you want to present the story through both mediums?

Lumsden: The short film came first. For a lot of film projects I have worked on, I have wanted to make a companion comic for them. This is purely because I am such a fan of comics and The Boat was the first project where it became a viable option. Our storyboard artist, Mark Weallans, did such a great job of the boards I could see we could adapt them and make a Graphic Novel. We didn’t have a big budget for the short film so there was a lot of story left over to tell that we could put in the books. I didn’t expect the story to expand as much as it has but I am really enjoying continuing the story.

AP2HYC: As we find out in the later volumes of the comic, we soon learn that our lone survivor isn’t quite so alone in the world and drifts into No Land, a post-apocalyptic version of Edinburgh, Scotland. Why did you want to show Edinburgh in such a way?

Lumsden: The main influence for me was to show Edinburgh in a different light. It’s about seeing the city where I grew up in a way that it hasn’t been seen before. This was a big motivation in making the short film. To be able to create this world upon the rooftops of the city I live in is a lot of fun. We are on Book 3 now and all storylines are all building up to our finale. and I am looking forward to showing more aspects of the city in future instalments.

AP2HYC: What are your future plans for the series? What future projects may we expect to see from yourself in the near future?

Lumsden: The Boat volume 3 came out a few months ago and we are getting a really positive reaction, which has been great. We are hoping to start production on Book 4 in a few months. We are close to the end of the series now and the next book is the most exciting part of the story. It fills in the gaps between the past and the present and we really build upon the action that took place in “Volume 3: Blood in the Water”.

Aside from The Boat, I have two other stories that I am hoping to start soon. If there is time and budget I would love to release them alongside The Boat. They are very different stories and we are looking at putting the team together for them soon. I just have to make my mind up on which one goes first!

Outside of comics, I am developing my first feature film that I am hoping to direct next year. It’s a horror film called Out There written by Ronnie Mackintosh and being produced by Blue Iris Films. We are currently developing it through the European Genre Forum. It is a pretty unique Scottish horror story, which I think would also make a pretty interesting graphic novel too.

Thank you David for giving us the time to make this happen and we can’t to see what is next. Show your support for David by checking out his website here or visit the official website for The Boat. You can also find a link back to our first review of the series available here. And finally, tell us of your opinions on The Boat by sounding off in the comments or send us your thoughts on Facebook or Twitter!